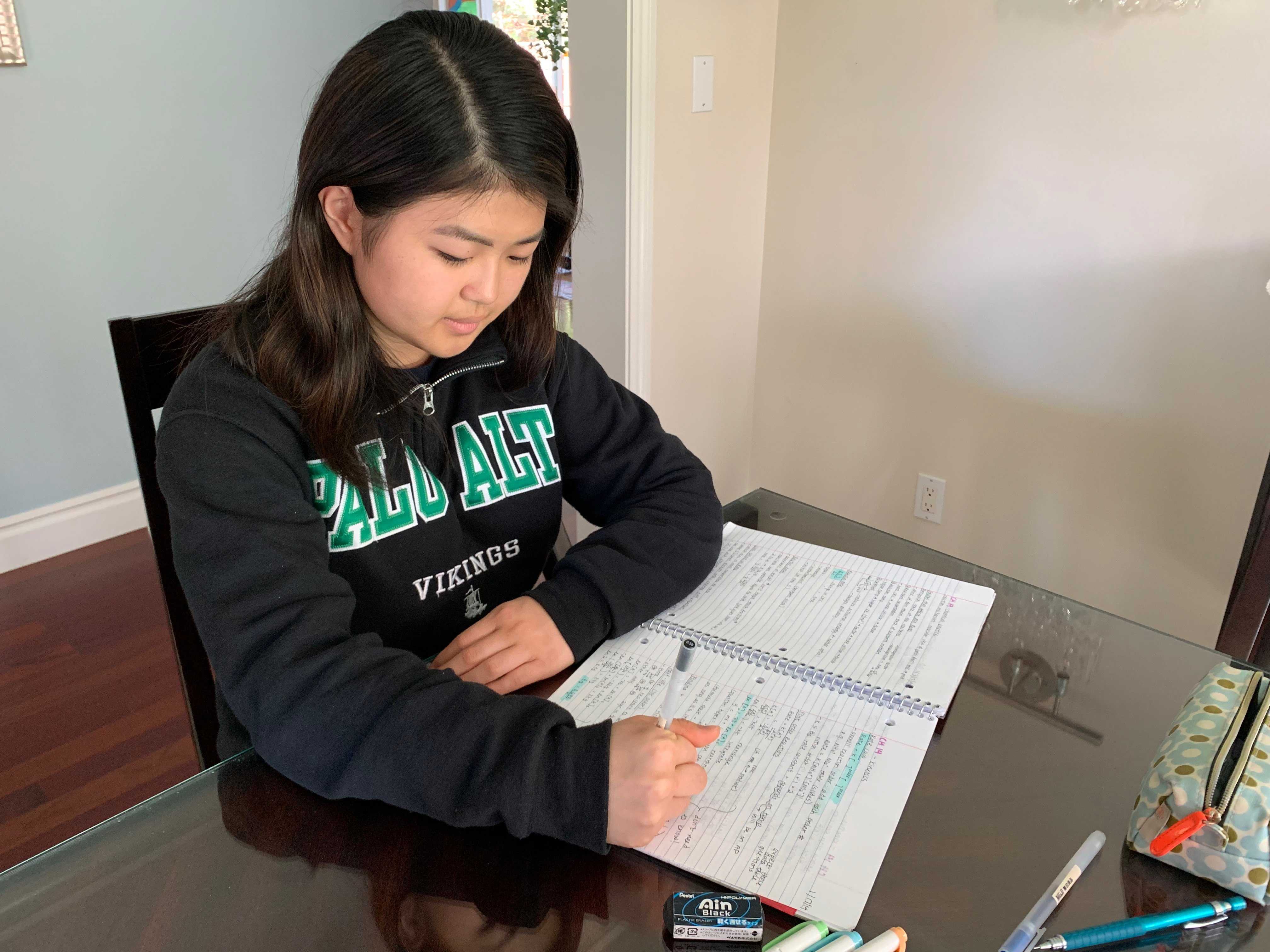 The furious clicking of keyboards fills the air as students scramble to type out every word their teacher says while flying through a lecture. With technology becoming increasingly accessible, the use of computers in classrooms has become so common that many find it difficult to get through a school day without one. However, when it comes to learning and memorization, Paly junior Taylor Yamashita finds that writing her notes by hand, rather than typing them, helps her retain information better.

“I’ve tried out a lot of different methods over the past few years,” Yamashita said. “Once I figured out what worked best for me, I stuck with it. Typing up notes might be faster, but I feel like the information doesn’t stay in my brain as well.”

Though some find handwriting to be tedious, the fact that taking notes by hand is slower than typing helps students retain information, according to Paly Advanced Placement (AP) Psychology teacher Christopher Farina.

“The studies that have been done on (handwriting) theorize that if you’re taking notes during lecture, (handwriting) forces you to pay attention to the information that’s really important, because you can’t possibly write it all down.”

A 2014 study conducted by Pam A. Mueller of Princeton University and Daniel M. Oppenheimer of the University of California, Los Angeles found that students who took notes digitally could write down information more quickly and tended to practice what they called “non generative note-taking,” in which words were copied verbatim and content was processed on a more shallow level.

On the other hand, students who handwrote their notes had to turn to “generative note-taking,” where they were forced to summarize and paraphrase information. This extra processing of information allowed for improved memory of content.

Yamashita found the conclusion of the experiment holds true for her experiences.

“When I type up my notes, I usually end up typing too much. I think the process of summarizing and prioritizing information (when I handwrite notes) is really helpful.”

In addition to taking notes by hand, another effective strategy Paly junior Ella Jones practices to improve her retention of information when taking notes is connecting each point to a question.

“After I am through the section, I reflect on each note by pairing it with a question so that when I look over my notes, I can ask myself the corresponding question to see if I can remember the note,” Jones said.

According to Farina, the process of asking questions and attempting to recall material is imperative to long-term memorization.

“All the evidence suggests that if you’re thinking deeply about a topic, you’re more likely to remember it. So even if you’re not taking notes, if you’re listening to something or reading something and you’re formulating questions or connections in your head,  that helps you to retain that information better.”

“Making wacky acronyms helps (with memorization),” Jones said. “For example, if you want to remember the order of territories Hitler invaded in World War II — Rhineland, Austria, Sudetenland — you would say ‘rhinos are sorry.’”

Acronyms are an example of a psychological technique called chunking, where individual pieces of information are grouped into larger units to increase the amount of information that can be memorized.

“With acronyms, you can take one word and unpack it and access three, five, seven elements that are within it,” Farina said. “When you take large sums of things and pack them together into one group, then you can remember that group instead of remembering all the individual items.”

Another trend becoming increasingly popular among students such as senior Rosa Schaefer Bastian is taking bullet journal notes, characterized by the use of color and non-traditional arrangement around the page, rather than writing line after line.

“I do think having some sort of different organization to your note helps you remember it, because when people get stuck on having it be a line-by-line type of thing they don’t put the information that belongs together together.”

Farina agrees that a unique organization of notes allows the information to stick in the mind.

“Arranging information gives it a sense of place, and going through information in a particular pattern can help,” Farina said.

According to Farina, taking notes laid out in a specific way has an effect comparable to that of the memory house technique, often used by those who compete at memory championships to memorize the numbers and suits of an entire deck of 52 cards.

The general strategy for the memory house technique is to call up a vivid mental picture of what your house looks like, and visualize yourself walking through every room, looking at all the objects. Memory champions assign the cards to different objects in their homes and always take the same path through their mental house. This specific path, as well as the assignment of a card to a random object, allows them to retrieve the information when they “walk” back through their house.

However, while all of these strategies in note-taking provide for a more effective recall of information, the most important part to memorizing information is being exposed to it multiple times.

“There’s really two parts to note-taking. One would be taking the notes, and you learn something by taking notes just because you’re focused on gathering information, deciding what’s important deciding how to write it down. But then in theory, the notes should be used later on in review or studying.”