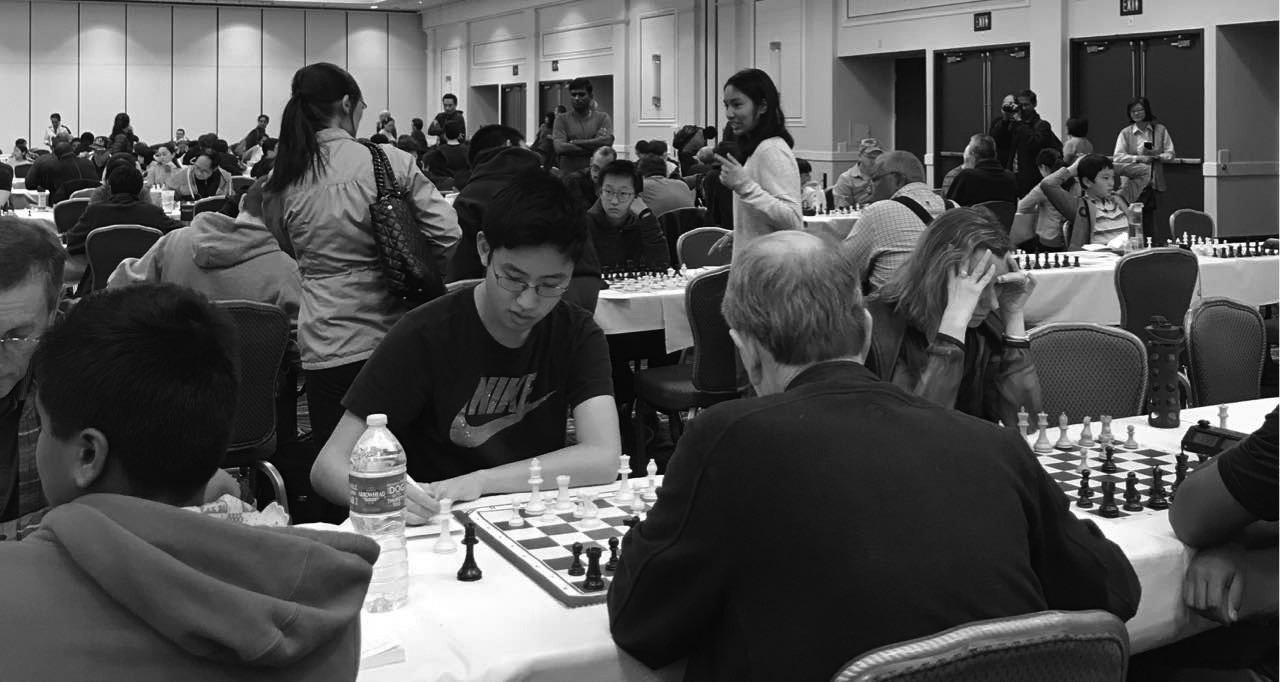 Staring intently at his phone, senior Andy Xiong appears isolated from the outside world. The Paly lunchtime racket envelops the background, but nothing can disturb his concentration. Grinning quietly to himself, Xiong makes his final move, rook to d7. For his opponent — located somewhere around the world — it means one thing: checkmate.

“I’ve always liked logical types of games, so when I started chess, I liked it enough to continue,” Xiong said.

Given chess’s worldwide popularity and historical importance during the Cold War, one of the great controversies surrounding the game is whether it should be considered a sport.

While chess is recognized as a sport by the International Olympic Committee, it is not included in the Olympic games.

For Xiong, chess is unequivocally a sport considering its many sports-like attributes.

“I do believe that chess is a sport because in my opinion, anything that involves competition and has replicable rules can be considered a sport,” Xiong said. “Another reason is that most modern-day sports like football and soccer all have teams, matches and games or other factors that chess too can emulate, which makes me believe that chess can be qualified as a sport.”

Xiong is an avid chess player, competing in tournaments and online.

According to Xiong, he started playing around the age of 4 or 5 and has since ascended the chess rankings in his high school years, currently fluctuating between 1950 and 2050 in the US Chess Federation rating. He learned mostly from reading instructional chess books like Mark Dvoretsky’s, but also through private lessons.

“I started chess pretty early but didn’t really take it seriously and only started playing competitively in tournaments in middle school around seventh or eighth grade,” Xiong said.

While chess may not be considered a traditional sport, the intense competition and tournament infrastructure around the game means Xiong must treat it like one, down to which format he chooses to play in.

“I play on Moreso Online since it is convenient, but over-the-board in tournaments is more serious since it actually affects your rating,” Xiong said. “Tournament games usually are in a longer time control too; more time for both players.”

Two popular ratings exist to measure a chess player’s skill: USCF, used in the US, and the  Fédération Internationale des Échecs.

FIDE is used in most of the world outside of the US. Ratings go from zero to infinity, but the highest rated player right now has a rating of 2876 FIDE, and the number 2 player has a rating of 2812—a difference that is very significant, according to Xiong. A player gains or loses rating per tournament based of wins, losses or draws.

Xiong said his goal in chess is to reach USCF master level, which he’s just 200 points shy of currently. However, just as important, he said, is what he has learned from chess and applied to his life outside of chess.

“In chess, I’ve learned to slow down and take my time more, which can be applicable to subjects such as math or physics where it can help you prevent stupid mistakes,” Xiong said.

Similar to traditional sports, Xiong’s matches can go on for several hours and demand extraordinary amounts of endurance and focus.

Despite these similarities to physical sports, junior Matthew Ho, also an ardent chess player and co-president of Paly’s Chess Club, said chess isn’t a sport but can be considered like one.

“It isn’t physical,” Ho said. “However, it is like a sport, especially long games which require the ability to concentrate for long periods of time, which may require physical fitness.”

While Xiong appreciates chess primarily for its logic, Ho said he enjoys chess for reasons in addition to critical thinking.

“I like playing chess because it’s fun to calculate moves in advance and find out you didn’t make a calculation error,” Ho said. “(My goal is to) get better at not making stupid errors/oversights.”

“I prefer online for faster games and on the board for slower games,” Ho said. “Playing on the board is more satisfying, but it’s hard to move pieces on the board.”

Although Xiong and Ho disagree on whether chess is a sport, Ho also credits chess with better decision-making ability.

“(Chess helps with learning) how to weigh various options in order to make better decisions as to what to play, (which is) applicable in real life for making decisions in general,” Ho said.

Although online chess is popular, junior Alex Selwyn and co-president of Chess Club with Ho, said the club typically plays the old-fashioned way.

“At Chess Club, we play over-the-board chess, but online chess is always an option if all boards are in use,” Selwyn said.

While Selwyn agrees with Xiong and Ho that playing chess improves a variety of skills like  creative thinking, intuition and memory, he differs on whether chess is truly a sport.

“It’s an interesting debate, but I don’t consider it to be a sport simply because it doesn’t require really any physical activity,” Selwyn said.

With that attitude, though, Selwyn might find himself mired in Xiong’s unstoppable castle battalion endgame—that is to say, his rook on d7.