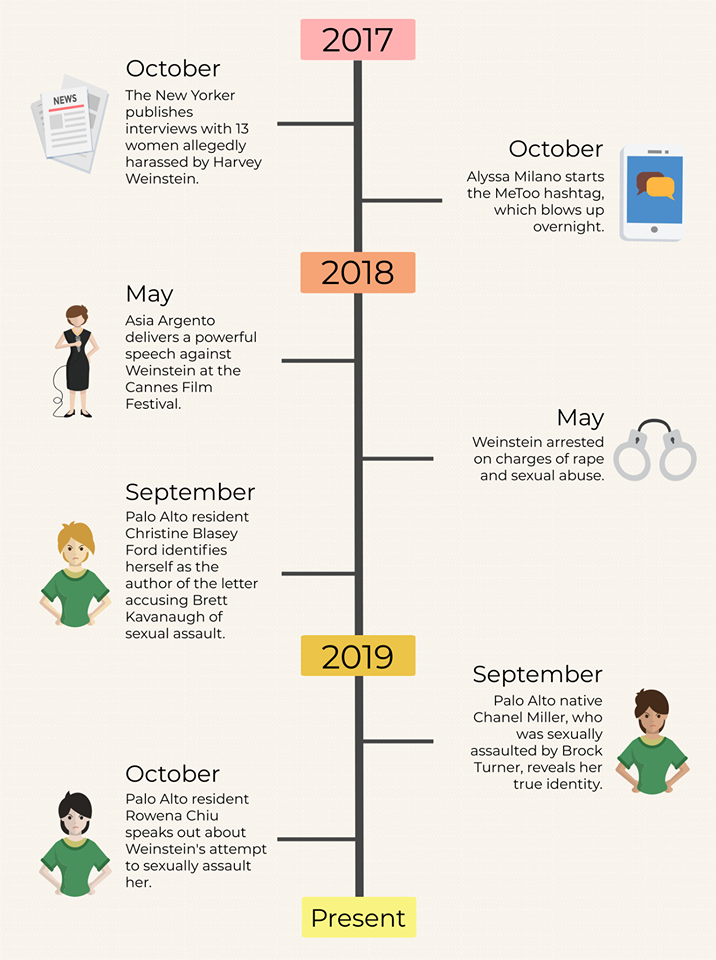 A Palo Alto resident and former assistant of Harvey Weinstein Rowena Chiu has accused him of attempted rape that occurred 21 years ago. Chiu wrote about her experiences in an op-ed published by the New York Times on Oct. 5 and said the alleged assault took place at a hotel where both she and Weinstein were staying.

She is also featured in the book “She Said: Breaking the Sexual Harassment Story That Helped Ignite a Movement” by New York Times reporters Jodi Kantor and Megan Twohey.

Weinstein, the former film producer, has been accused by over 80 women of sexual abuse.

Chiu wrote in The New York Times that her nightmare started when she was asked to see Weinstein in his hotel room late one night to go over scripts they were working on for Miramax Films, a company once owned by Harvey and his brother Bob. Chiu was 24, and this was one of her first jobs in the film industry, a longtime dream of hers.

After the incident, Chiu said she reported it to Weinstein’s superiors looking for support. To her surprise, they discouraged further action and pressured her to sign a non-disclosure agreement.

According to Chiu, at this point the only option was to erase the incident from her memory.

“We were told to treat that period of our lives as a black hole and never speak of it again,” Chiu said.

Chiu said she was terrified for decades about coming out with her story. In an interview on The Today Show, she said the three main reasons she waited so long to tell her story were her children, the legal repercussions that could come as a result of a non-disclosure agreement she signed with Weinstein’s attorneys and the personal ramifications.

“It is not a story that is easy to tell,” Chiu told The Campanile. “Most times in the last couple of years I’ve really been committed to not coming forward because I have a pretty young family. I really think that the personal cost is huge. In all cases the victim has already paid a huge price and then you continue with the non-disclosure agreement in that sense there’s already at least a double violation.”

Chiu’s said these fears were realized when a journalist showed up in her driveway and approached her spouse.

Chiu said, “When your husband is cleaning the car and a New York Times person comes into your driveway, it’s a good indication of the invasion of privacy that will come.”

In 2018, as Chiu started hearing reports about other victims such as Palo Alto resident Christine Blasey Ford, who accused Brett Kavanaugh of sexual assault, she said she found comfort in talking with other survivors before she was ready to tell her story. She even met Blasey Ford at a Los Angeles event for women who have experienced sexual abuse.

Chiu wrote in her Times story, “Meeting others who had similar experiences created a seismic shift within me.”

Chiu said she has spoken with many other survivors and said every experience is unique and the aftermath affects people in their own way.

“Sexal assault is very personal and very different,” Chiu told The Campanile. “There’s a great variety of experiences. People who have actually experienced sexual assault find that their reaction is quite different from what many think, and they freeze up.”

Although Chiu said she is affected by sexual assault stories she hears, she said the link between survivors is not as clear as one might think.

Chiu said, “The idea that a sexual assault survior will be connected to other assault survivors is pretty fasile and is not really true.”

Since she came forward with her allegations, Weinstein and his attorneys have said he and Chiu had a long-term relationship.

“Harvey denied my account and threatened to sue me, claiming we had a consensual six-month physical relationship,” Chiu said. “It isn’t true. But muddying the waters is a common tactic of abusers.”

Regardless of the reaction to her Times piece, Chiu said since sharing her experience, she feels relieved and empowered.

Chiu wrote in op-ed, “I can briefly glory in the relief that I am no longer sitting on a sickening secret that has finally and ultimately come to light.”

And since bringing her story to light, Chiu told The Campanile she is happy seeing the impact her story has had on other victims of sexual assault.

“I love hearing stories of young women saying they found meaning in the story,” Chiu said. “Encouraging, empowering or at the very least feeling connected to the story.”