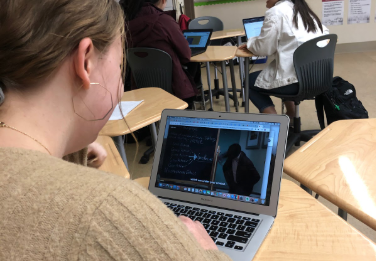 New streaming services on the rise

For many students, balancing school and extracurricular activities can be difficult. To relieve stress and relax, junior Malia Wanderer turns to Disney+ as an outlet for escaping the troubles of the real world.

Disney+, the latest addition to the hundreds of existing streaming services, features a wide variety of shows and movies. It appeals to its subscribers through its accessibility to Disney television shows and movies, according to Wanderer.

“I think it’s really cool (that) all these Disney movies are in one place and all the television shows,” Wanderer said.

According to junior Sophia Krugler, Disney+ makes millions of people — including longtime subscribers of Netflix, Hulu, Amazon Prime Video and other popular streaming services — reminisce about their childhood favorite movies and TV shows.

“I feel like a really big part of their platform is Disney+ is trying to appeal to the nostalgia of people, and it’s really working because all these shows are shows we grew up with and it’s shows that we want to watch again,” Krugler said.

Krugler, a subscriber to both Disney+ and Netflix, said Netflix will need to add more original series to maintain its popularity.

According to CNBC, Netflix removed the well-known comedy “Friends” from its platform as of  Jan. 1 due to WarnerMedia outbidding Netflix. Krugler said Disney does not have this problem, as they own all of their content.

Disney+ increased its exclusivity by removing its content from other platforms and services, and, according to Krugler, a key reason for Disney+’s success is its relatively recent creation.

“It’s a new streaming service with a bunch of new content that I haven’t really seen yet, whereas Netflix I’ve had it for a while, so I’ve seen all the good stuff,” Krugler said.

According to CNBS, as Disney+ continues to release more shows, movies and original content. the number of subscribers to the service increases considerably.

Similar to some series on Hulu, Disney+ releases episodes in batches, usually one episode a week, as a method to retain subscribers.

“They’re not just giving it all at once and that way they have new things that they can add to their platforms so their users don’t get bored,” Krugler said. “But it is sort of disappointing when you’re like, ‘Oh this Disney thing that I want to see isn’t on Disney+.’”

Unlike Disney+ and Netflix, which are ad-free regardless of which plan users choose, Hulu users are forced to sit through advertisements unless they pay for a more expensive plan, which junior Avery Hanna said she dislikes about the platform.

While ads are capped at 90 seconds, they often appear at pivotal moments in the video, irritating users like Hanna, who said she uses Hulu because of the shows it has.

Sophomore Marissa Yeh, a long-time subscriber to Amazon Prime Video and Netflix, says she prefers Netflix because of its wider range of content.

Krugler said, “Streaming services expand your knowledge of the world and allow us to connect through shared shows and experiences.”