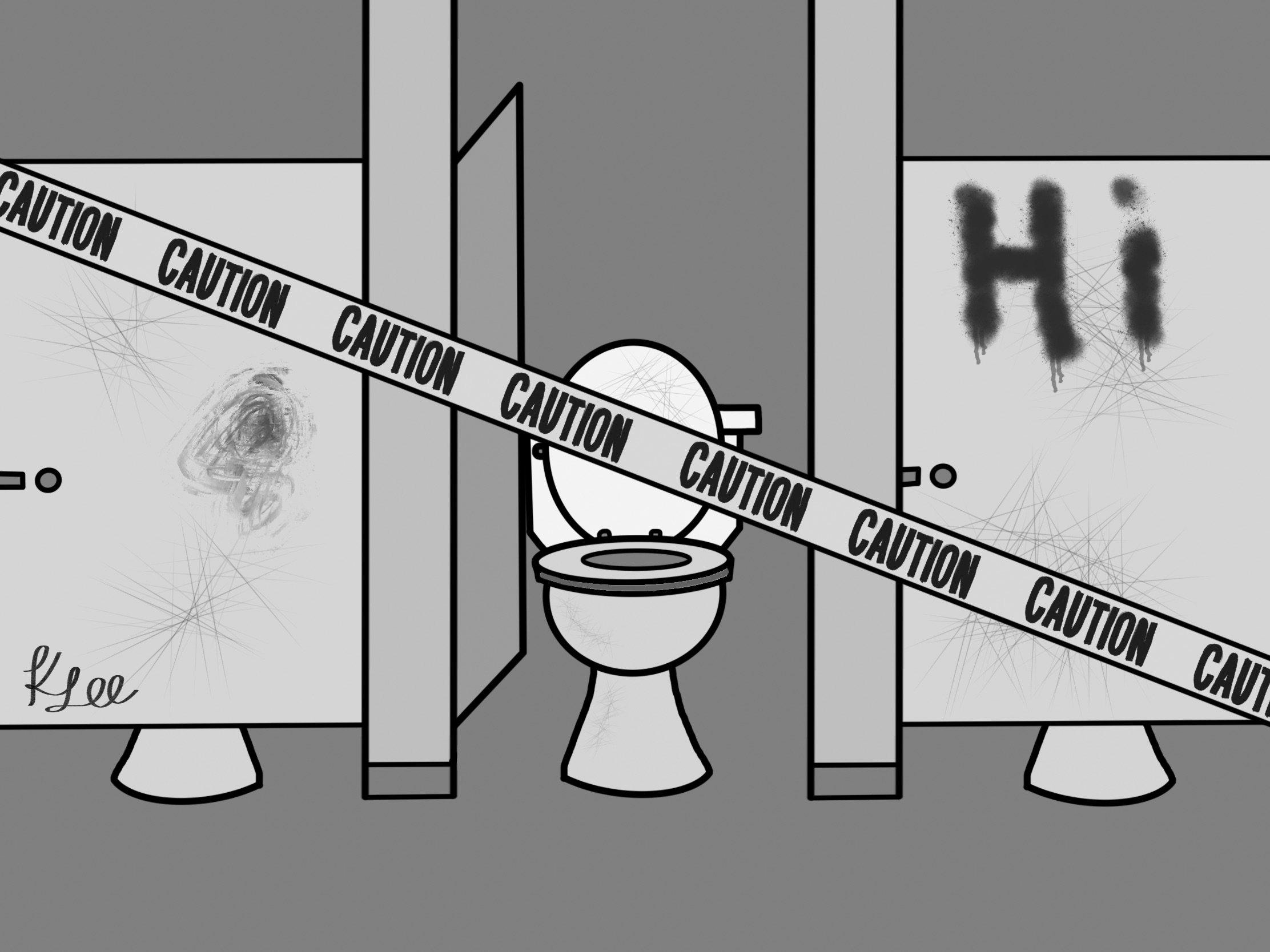 When the door of a Paly bathroom swings open, the smell that dwells beyond is a scent that can only be described as disgusting. Toilets that won’t flush and a faucet that barely works. Sinks that bear signs of messy eating and littering in the bathrooms. Graffiti lurking in the big stalls, scribbled with permanent marker. Feminine product dispensers consistently empty in all girls’ bathrooms. These are problems that should not be happening. All Paly students need to clean up after themselves when using school bathrooms.

“Every day, we clean the bathrooms, but every day, it looks like this,” custodian Cuong Giang said.

Giang described the waste he finds: trash cans overturned onto the floor and toilet seat covers placed over them to make a seat, rolls of toilet paper taken out of the dispenser and thrown around, some toilet paper splattered on the ceiling, some littering the floor, some clogging the toilets and the rest hanging from the tops of toilet stalls.

“They get a roll and go (crazy) with it,” custodian Marie Bratton said. “If you’re lucky, they don’t throw it in the toilet.”

Not only do problems in the bathrooms include toilet paper being found where it doesn’t belong, but the issue extends to other items too, such as food packaging. The consequences that come with eating in the bathroom are evident in their remains.

The biggest problem with eating in the bathroom does not lie in the act itself, but rather in where the food and packaging ends up. The majority of students make sure the trash does end up where it belongs: in the trash cans. But to some, the nearest convenient place to dispose of trash in a bathroom stall is inside the toilet bowl.

Everything from the expected — urine from several different people, constipated feces and mountains of toilet paper — to things that definitely do not belong in toilet bowls — Juul pods, tampons, flaming hot Cheetos, school lunch wrappers, chocolate flavored energy drink cans and a soap dispenser — have shown up in the toilet bowls before.

With this assortment of objects, it’s no surprise that many of the stalls in both the boys’ and girls’ bathrooms are clogged. But what is surprising is how people can make enough time out of their schedules to accomplish these incredibly irritating feats in addition to writing the graffiti found in nearly every single big stall in Paly’s bathrooms.

On the walls of bathroom stalls, there are curses against just about everything, complaints against other people and, oddly enough, weirdly poetic quotes.

But despite how the bathroom stalls have entertained several bathroom-goers, it’s still pretty obvious that they are not the same as whiteboards. And eventually, they are going to run out of space and need to be cleaned.

Paly’s bathrooms are hard to cleanse. The removal of graffiti, the unclogging of toilets and the replacement of the toiletries all take time and effort for the custodians, and they don’t receive as much credit as they should for keeping the bathrooms clean every day after students use them.

Much easier than purposefully making a mess is just cleaning up after yourself in the first place. Do not make someone else clean up after you.

Of course, some of what students are doing may be unintentional.

Even so, for all students, the simplest thing to do is to treat Paly’s bathrooms like your bathroom at home.

Think of it like this: if you would not leave behind a mess for your parents to clean, do not leave the bathrooms in a worse condition than you found it in.

Quite simply, the custodians clean up the messes that form in the bathrooms every day.

Don’t make their job harder. Keep trash out of the sinks, writing off the walls, and food out of the toilets. Clean up after yourself when you use the bathroom.

In the end, it’s every student’s choice as to how they want to leave the bathrooms for everyone else.

But why not do what’s easiest and clean up after yourself?