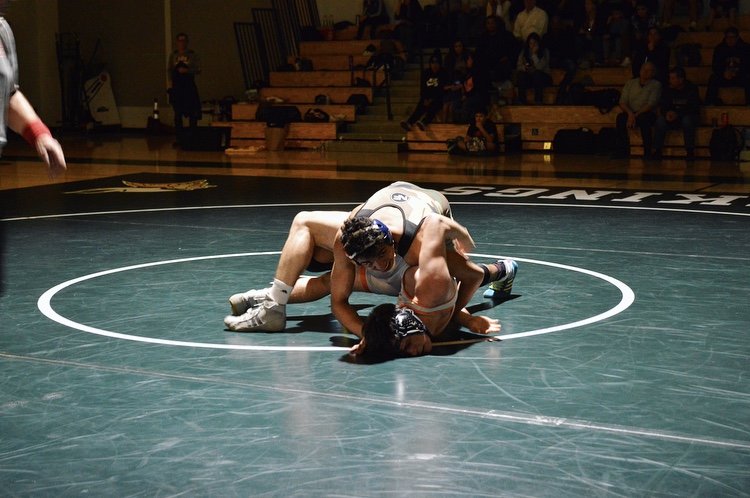 After completing the regular season with three dual meet victories and top placings at various tournaments, the Paly wrestling team and their four state qualifiers are hoping to finish the postseason strong.

“For states, we would love for our wrestlers to get on the podium,” Coach Jonathan Kessler said. “Our program hasn’t earned many medals since there’s been a state tournament … Our last boys CCS champion was John Hall in 2008.”

“We were a better tournament team especially when we had full strength in our line-up,” Kessler said. “(Our SCVAL results were) a great accomplishment for the program.”

At the Central Coast Section (CCS) tournament on Feb. 21-22, the boys were sixth out of 80 schools and the girls were 15th out of 76 schools.

“I thought the performance of the wrestlers was phenomenal,” Kessler said. “There was a lot of success throughout the season and postseason where it counted most.”

Lee, Schwarzbach, Heydarpour and Creighton will be attending the California Interscholastic Federation State Championships on Feb. 27-29. Lee is the second wrestler in Paly history to qualify for states twice.

Schwarzbach has already reached part of his goal for the season by winning a title at CCS, and said he wants to complete the other part by placing at states.

“I’m working as hard as I can in the room and trusting in my coaches,” Schwarzbach said. “I think me, Dara and Cade can all place (at states), and I’m excited to go compete.”

Heydarpour is seeking to secure a place within the top eight at states.

“(My) goal for state is to place top 8 because it’s been a goal of mine for a couple years now,” Heydarpour said. “(I) feel like I’m closer than ever and it’s a big deal to be top 8 in California.”

Creighton aims even higher, setting his sights on placing first at states.

“My goal is to win states because if you go into the tournament with the goal to just place, then you’re already content with losing,” Creighton said. “Everyone who places in states goes into it with winning in mind.”

For the last week before states, Kessler plans to keep his training the same as his usual postseason workouts, other than a few travel plans.

“The training will continue to be the same as the last few weeks,” Kessler said. “We might go to Gilroy on Monday or Tuesday to train with their team. We head to Bakersfield (states) on Wednesday after lunch.”

Along with Kessler’s training, the wrestlers are taking their own steps in preparing for states. Creighton said he is focusing on physical and mental conditioning before states.

“For preparation, I’m taking care of my body with proper nutrition, keeping weight under control, strengthening my body, and keeping my head clear,” Creighton said. “ Because mental preparation is key in all competition, let alone wrestling.”

Heydarpour said he also prioritizes mental preparation, as well as recovery and some last-minute improvements.

“(My plan is) mainly just recovering, watching some (videos of my CCS matches), and getting mentally prepared for the tournament,” Heydarpour said. “At this point working out a ton won’t help drastically and I’m confident that my training in the last couple years will get me to my goal.”

Kessler said he is optimistic about the teams’ prospects for the upcoming meet.

“This is one of the better teams I’ve been apart of since coaching a Paly,” Kessler said. “We have a lot of wrestlers dedicating their time in the offseason and that helped propel them this season. I don’t like to make predictions or anything, but I like our chances.”