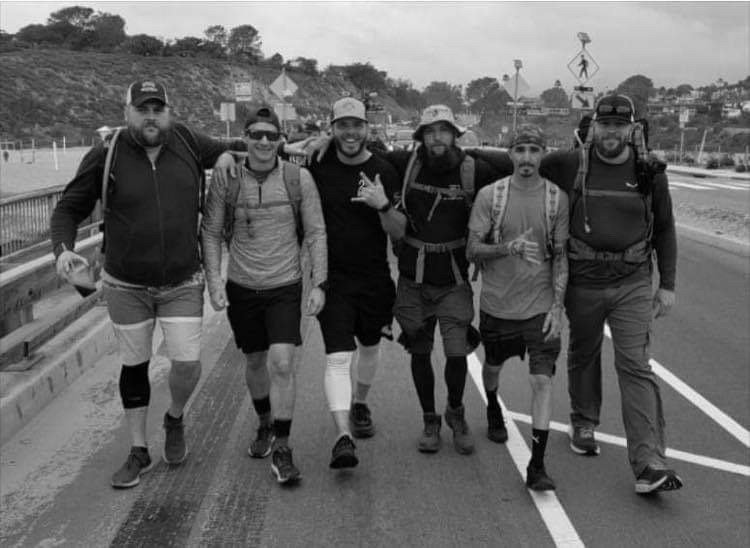 Palo Alto firefighter, U.S. Marine Corps veteran and chart-topping recording artist John Preston and his crew reached the U.S.S. Midway on Feb. 9 after 28 days and 625 miles of hiking on the California coast.

Preston organized the hike, dubbed “22 and You,” to help prevent veteran and first-responder suicide.

Preston said the event’s name originated from a Veterans Administration 2013 study which found that 22 veterans died by suicide every day between 1999 and 2010, a statistic Preston said he highlighted by hiking  22 miles per day while toting a 22 kilogram backpack.

Preston and his crew have also been filming their journey for a “22 and You” documentary, which will feature stories of other veterans regarding their own experiences with mental health and loss.

“People say ‘awareness’ a lot (to describe our mission, but) we’re not raising awareness,” Preston said. “We’re trying to stop people from taking their own lives. That is our No. 1 mission.”

Preston and his crew have also been filming their journey for a “22 and You” documentary, which will feature stories of veterans sharing their own experiences with mental health and loss, with the aim of a release in September.

Origins of the Organizers

Seven years ago, Preston said he made the decision to use his musical talent to help others after seeing an Iraq veteran friend’s struggle with addiction and post-traumatic stress disorder; he advocated for PTSD, veteran suicide and other causes important to him with the national media attention he earned from his song “this IS war,” his Los Angeles Music Awards nominated EP “Your War is Over,” and “Day to Night,” which reached the Top 100 New Alternative Albums chart.

In 2016, Preston’s brother Mike, a Marines Corps veteran and police sergeant, died by suicide. After this loss, Preston said his commitment and passion only grew. It drove him to continue to advocate for veteran mental health and suicide prevention through his music and interviews with various media outlets and inspired him to create 22 and You.

The rest of the 22 and You crew each have their own stories that drew them to this cause.

One of the lead organizers of the hike, Adam King, is a Palo Alto firefighter paramedic skilled in public outreach who took charge in mapping out the route to San Diego. He said out of the many calls he received in his career, one that left a significant emotional impact on him involved a murder-suicide between a husband and wife.

“I’ve definitely had difficult times as a first responder, where I had really negative thoughts that were very dark and disturbing,” King said. “I’d like to help (people to) never be so sad that they would resort to suicide.”

Shannon Harness, an outdoor recreation professional and U.S. Marine Corps veteran who served alongside Preston, helped prepare the proper equipment, clothes and first aid for the journey. He has always embraced the role of confidant and comforter for his friends, and continues to emphasize open discussion of mental illness as an important step in suicide prevention.

“There’s a stigma attached to talking about mental illness and mental health,” Harness said. “It’s something that means a lot to me, to try to get rid of that stigma and get people to actually talk to each other and feel comfortable talking to each other about how they’re doing, how they’re struggling and to recognize that all pain is the same.”

Through this hike, he plans to extend his support system and encourage others to start their own.

“Everyone’s been affected by mental illness in my life, (including) my family and friends (and) my own personal struggles with anxiety and depression,” Harness said. “We’re out here because we care and because we want people to talk to each other instead of bottling it up until they get to a point where they haven’t spoken to anyone and they feel like they can’t.”

Preston said he was always aware the trek would come with difficulties. In fact, the entire point of such an extreme hike was the toll it would take on the crew.

“I never felt like I could truly explain what it felt like to be a family member that lost one to suicide,” Preston said. “My plan initially when this all started was to create a physical impact that would mirror that. I knew that hiking 22 miles in one day hurt really bad. I’ve done that before. So I wanted to go really far, I wanted to film this and manifest this pain physically to show the world what it would look like.”

And indeed there was plenty of physical pain, especially considering Preston and Harness suffered from physical issues such as torn rotator cuffs and chronic back problems even before the hike.

The physical suffering also led to mental fatigue as well, which Preston said led to doubts and thoughts of giving up. Preston, who experienced severe back pain, skin loss and even toenail loss throughout the trek, said this mental and physical challenge affected him daily.

“I quit every day in my mind,” Preston said. “Every night … I could not move anymore, and I was crying from pain, which I don’t think I’ve ever done since I was a child. So every night I asked myself over and over again ‘How am I gonna wake up tomorrow and do this again?’ Yet, I woke up and I did it again.”

And like any other organized effort, there were bound to be bumps in the road, some of which turned out to be literal.

“We didn’t have a chance to drive the entire route beforehand,” King said. “So although Google said certain routes were open they weren’t always open, or some roads were farm roads and not passable walking roads. We ended up having to modify the route regularly throughout the actual hike.”

Once the grueling journey was over, Preston spoke at the U.S.S. Midway Museum about his experience and the goal of 22 and You. But the speech was followed by a sweet surprise: a proposal to his girlfriend Cory Willette, who happily accepted.

“That was one thing that was wonderful and amazing,” Preston said.

Harness says that advocacy work, whether it be a talk with a friend or a 625-mile hike, keeps him informed and equipped to help others and himself.

“I don’t ever want to say the wrong thing to somebody,” Harness said. “It makes me want to research and study solutions, breathing practices, meditation, therapy practices, anything that might help someone get through whatever they’re struggling with, so I’ve educated myself through the process of being an advocate. And in doing so, I’ve learned a lot to help myself.”

Preston, Harness and King all said the main highlights of the journey were the supporters and stories they encountered along the way.

The presence of these supporters kept up the morale and created an amazing group culture throughout the hike, Preston said.

“By our last day, there were over 50-100 people walking with us and it was unbelievable, just to feel that energy and people that showed up with their own beautiful stories and their own sad stories and just sharing them with us and telling us that we brought them purpose,” Preston said. “It meant a lot to all of us in the group.”

The crew and supporters formed close bonds by the end of the march, which made reaching the Midway a bittersweet victory.

“When people show up like that, we feel like we have a community,” Harness said. “John and I and the crew are all sad to be parting ways soon because we’ve created lifelong friendships over 30 days that we’re hoping to continue.”

A Blessing in Disguise

Preston admits he grossly underestimated the impact of the 22-kilogram pack in the hike. After 200 miles, he realized that in order to keep going, he would have to ask for help, which was symbolic of the cause itself, he said.

“(I was initially) speaking with my own bravado, with my own stubbornness, my own madness, thinking that I was gonna be able to carry that weight with me the entire time and go through all of that, and the reality was that I needed help out there,” Preston said. “I had a wonderful and amazing crew that made sure that I made it through every single day and when we decided to take the pack off my back, they were there to hold it for me, as well as the fire service and all the other veterans and members of families that lost people to suicide that came out to help us carry that weight with me as well.”

Though he set out to help others, Preston said he returned from the trip with his own mindset improved.

The change in plans sparked a self-realization and a new hashtag on 22 and You’s social media, #sharetheweight, next to the original #carrytheweight.

“This part of the journey is the most healing thing that’s ever happened to me in my life,” Preston said. “My ability to finally ask for help was a major part of my own personal growth. I plan now, upon my return, to actually go seek help for my own mental health and take care of myself.”

The U.S. Department of Veterans Affairs’ 2019 National Veteran Suicide Prevention Annual Report shows that 22 and You’s cause is becoming more important as suicides among veterans increased by 6.1% from 2005 to 2017, with the suicide rate of veterans aged 18 to 34 increasing  over 10% from 2015 to 2016.

As for the general American population, the American Psychological Association reports that symptoms consistent with major depression in the last 12 months increased 52% in adolescents from 2005 to 2017 and 63% in young adults, while the National Center for Health Statistics reports the age-adjusted suicide rate increased 33% from 1999 through 2017.

With these rising rates of mental health problems and suicide, the American Psychological Association views suicide intervention efforts and advocacy movements like 22 and You as crucial to improving the future of younger generations, especially those going into the military or looking into becoming a first-responder without being aware of the potential mental health issues they’ll face.

“I’ve had insomnia and struggled with that after a series of bad calls at work,” King said. “It was one of the things I didn’t anticipate going into that job.”

Thankfully, Preston and the crew of 22 and You will continue their advocacy work in the future to further help the veteran and first-responder community.

“I’m not gonna be changing anything that I’ve been doing in the music industry or how I’ve been approaching mental health that way as well as, our LLC is going to grow,” Preston said. “We’re going to be focusing directly on veteran and first responder mental health with everything that we do beyond the film, and we’ll see how that turns around as the year goes forward and we finish our film. I absolutely, 100% will be constantly moving forward as an advocate for post-veteran and first responder mental health.”