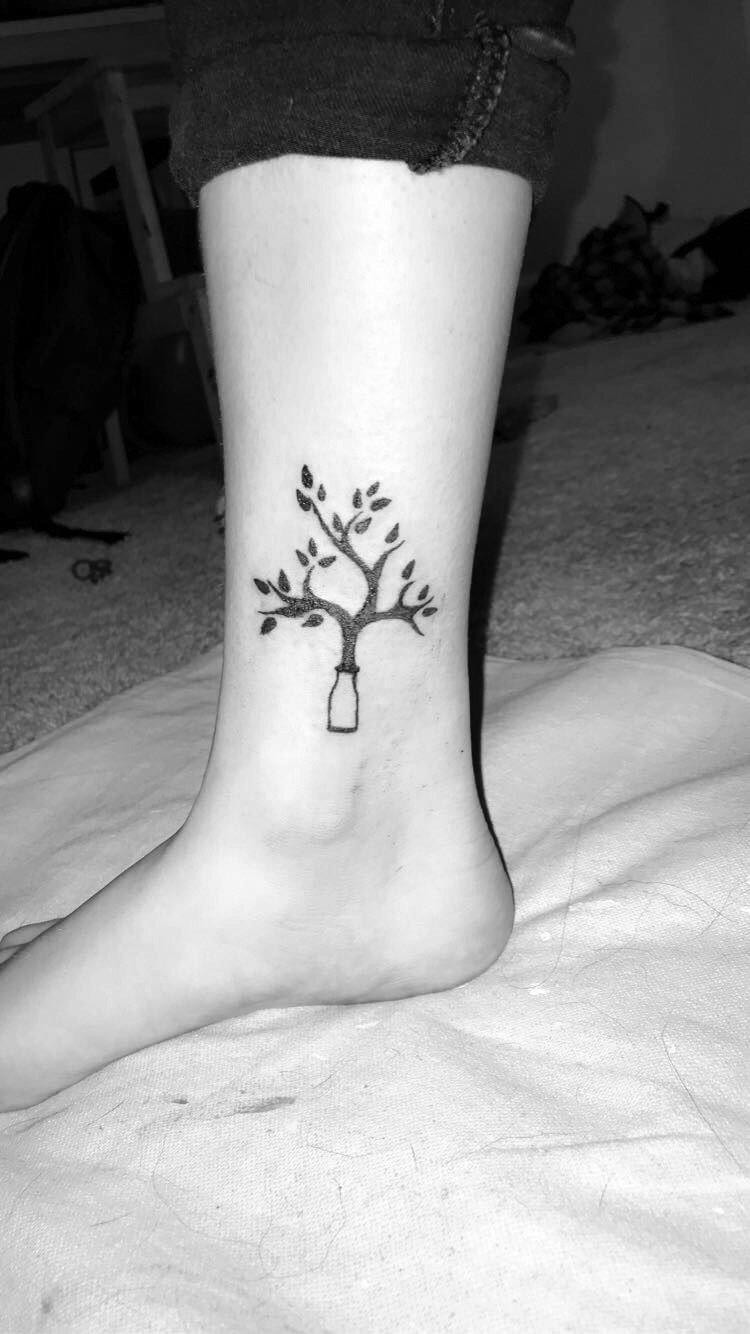 A16-year-old amateur tattoo artist sits cross-legged atop a bench on a breezy February afternoon. She cracks a joke and laughs, brushing her cropped hot pink and electric blue hair behind one heavily pierced ear. Her nose has rings in three places, and her long rhinestone earrings sway gently with a passing draft. A tattoo of a small butterfly accompanied by the words, “never yours,” in lowercase letters peeks out from her collarbone beneath her sweater.

As only a sophomore in high school, the artist has nine “stick and pokes” in various places on her body.

A type of handmade tattoo called a stick and poke, dubbed for the strategy of creating a design dot by dot with a needle, is similar to the method used to create prison tattoos.

The tattooist said these permanent “body mods” are not only for kicks and giggles, but also can be a form of art and self-expression.

Because they are done by hand, often by the wearer or a friend, some people believe that they are more personal than going into a tattoo parlor.

“I’ve tattooed to cover up scars, which I think was very impactful for (the girl receiving it), and I’ve done tattoos that have significant either cultural or emotional meaning to the person,” the artist said. “But even some tattoos that are just for fun … it doesn’t have to have this crazy emotional meaning. It can just hold a fun memory on you.”

According to the artist, teens with tattoos unfortunately may face a persistent stigma.

“There’s a Nextdoor group from Palo Alto that (talks badly) about me, calling me ‘crazy’, and a church that (also does),” the tattooist said.

However, the artist said that perhaps these groups are not aware of her struggles as a preteen, which drove her to get her tattoos.

“I suffered from a case of dissociative amnesia when I was about 11, and I still struggle with disassociation today,” the artist said.

The disorder often occurs after trauma or stress, and may cause the individual to be unable to recall basic personal information such as their name or family.

“The tattoo on my thigh actually has to do with my memory loss,” the tattoo artist said of her largest abstract design. “My tattoos are kind of a grounder for me. When I struggle with my disassociation, I can look at my tattoos and the stories that go with them, and they remind me that I’m here.”

Despite others’ misgivings, the tattooist said she is unbothered by the way others may view her.

“Honestly, at this point, I just think it’s funny,” the artist said. “I’m at nine tattoos, 18 piercings and every one has given me a boost of confidence. I think when I got my first two tattoos, I got them when I was about 14 in the same week, they are really small … I felt more confident.”

A female sophomore, who agreed to be interviewed only if her name wasn’t used due to familial concerns, agrees.

At three stick and poke tattoos and counting, she said she has tattooed herself and her friends as well.

“For a lot of people, it gives them a way to express themselves,” she said. “If they don’t feel like their body is theirs, they have the opportunity to put something they really love on themselves, and (reclaim their bodies).”

The sophomore said this method of coping helped her to sort out her feelings while attempting to find her identity.

“For me at least, I really hated my body and the way I looked and the way I acted, and I was able to get a tattoo to remind me to … ground myself (mentally) on my knee,” she said. I think it’s really important to someone who may be struggling,”

In California, tattoos, stick and poke or not, are illegal for anyone under 18.

Other states, however, may allow a minor to obtain a tattoo with parental permission.

With the rising popularity of handcrafted tattoos among teenagers, these laws have gone largely ignored.

According to the artist, stick and poke tattoos have gained popularity and notoriety among teenagers because of their unorthodox nature.

“It’s because people are young and stupid and it’s a fun, rebellious thing to do,” she said.

The artist said the golden rule to maintain safety within the culture of these DIY tattoos is to have sterile materials.

“I have done basic, standard things to keep things clean,” she said. “Just having all the sanitary materials needed to ensure that the risk of infection is as close to zero as possible.”

The artist said students must consider the maintenance of personal safety and health above any aesthetic purposes.

A female junior who also agreed to be interviewed only if her name weren’t used said she doesn’t regret her decision.

“I was 16 when I got my first tattoo, and it was spur of the moment,” she said. “It’s a small moon on my ribs. I’m 17 now, and I don’t regret it. I guess it depends on the kind of person you are. Some people will look back on experiences and be able to laugh even if its stupid, and others may have to live in regret. I think many stick and pokes are cute things like hearts and stars and girls get it for the aesthetic. I can’t really picture a guy getting a crescent moon or flower on his side.”

One thing that must be kept in mind, the source said, is that tattoos are permanent and one needs appropriate precautions to avoid looking back in regret in the future.

The artist said she disapproves various middle schoolers’ requests to be tatted, which are often regrettable tattoos of the names of significant others and students who have been unsafe in their body art journeys.

“There’s a lot of basic information you can get so easily … you might as well utilize that,” she said.  “If you don’t have the resources to do a tattoo or stick and poke properly, then maybe wait. There’s no point in rushing things, but also have fun. Have fun but don’t be stupid. My life motto for pretty much everything is, if you’re going to do something stupid, do it in the smartest way possible. If you’re going to experiment, you’re going to learn the hard way, or you can prepare before it happens.”