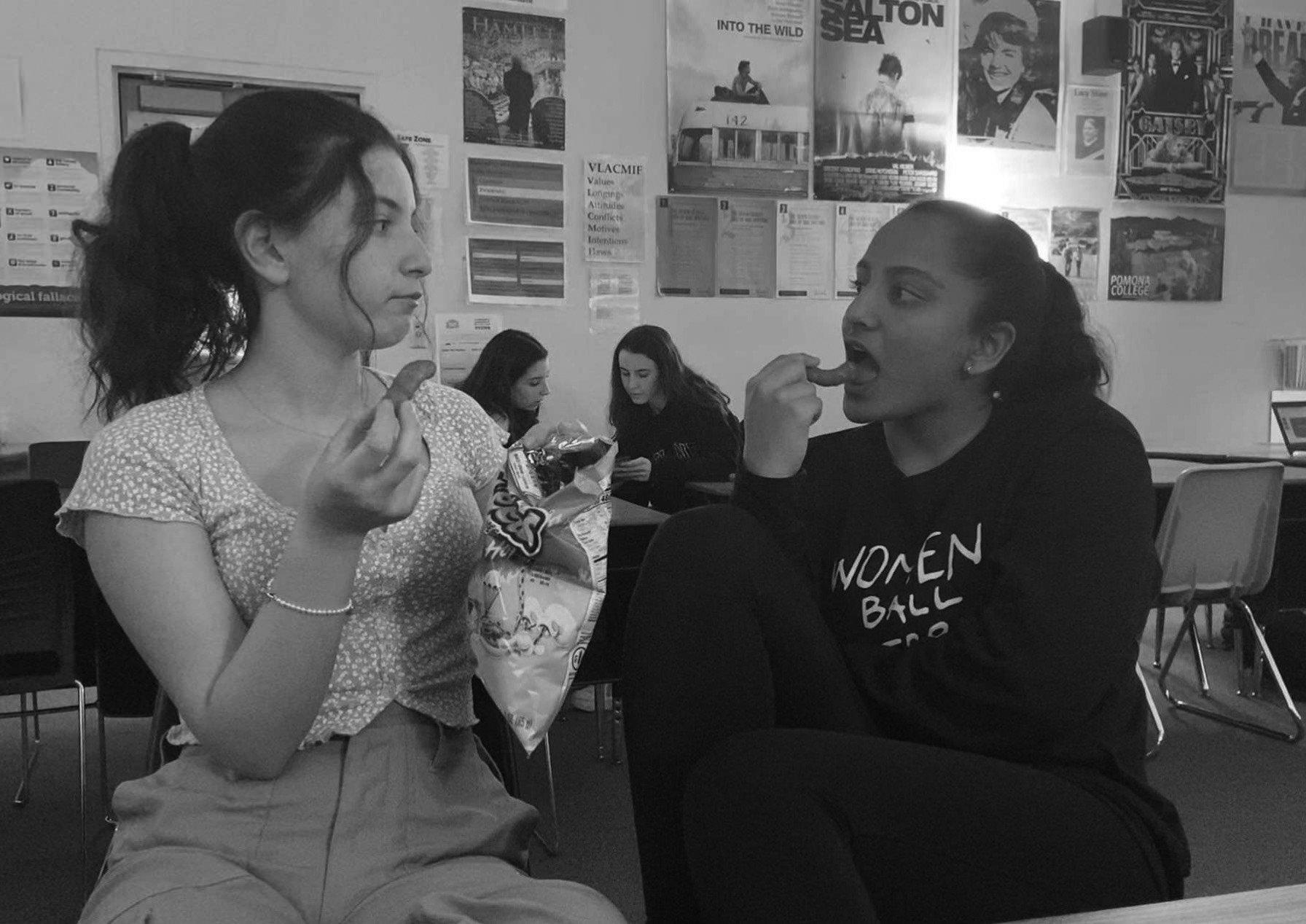 Flamin’ hot! Juniors Addie Harris and Annika Shah sit down during tutorial for a bag of Hot Cheetos, a favorite snack among many teens. Harris said, “I normally just get them because they are so cheap and easy to buy.” By Emma Todd

Constant consumption of spicy food can lead to stomach pain

Junior Addie Harris reaches into her backpack and grabs a bag of Flaming Hot Cheetos. As she opens the bag, though, she suddenly remembers the many times when this snack caused her stomach pain, and throws the opened bag back in her backpack.

But a lot of teens do not make the same decision. Hot Cheetos and other spicy snacks are a common choice for young people looking for an easy, cheap solution to their hunger.  Yet unfortunately, some students and medical experts alike say eating spicy foods may have a negative effect on a teen’s digestive track.

“I’ve had a sensitive stomach for as long as I can remember,” Harris said. “And I would say that I eat Hot Cheetos pretty often.”

Harris said she remembers exactly how she feels eating them.

“When I take the first bite, it’s often really good,” Harris said. “But when I swallow it, often times I might have burning sensations, and about 15 Cheetos later, I can feel my stomach rumbling. The taste is usually so good that I just keep on going.”

Around the country, others experience the same thing as Harris, but on a  more extreme level. Spicy foods such as Hot Cheetos irritate the lining of the stomach which can then become inflamed and swollen. This condition is called Gastritis, but eating too much spicy food can also cause indigestion and acid reflux.

Even for people who eat spicy foods on a regular basis, their bodies still might not be fully adjusted to it. Junior Annika Shah said her mom makes spicy Indian food 2-3 times a week. Shah said she has adapted to eating spicy food, but it took some time to fully adjust.

“Those ingredients in each of the foods have some spices to it, and I would say that when I was younger I wasn’t so adapted to the spiciness,” Shah said. “I guess when you are younger, you are just not as open to eating spicy foods, but now since my mom has made a lot over the years, I have adapted to it a lot more.”

Shah said she often has digestive problems and pain, which she says most likely attributes to the food she eats.

“I think (the pain) also might normally come with a lot of spicy foods that you eat,” Shah said.

Menlo Park pediatrician Katrien Burlinson said she often sees kids and teenagers coming into her office complaining of chronic stomach pain. After asking many questions about the source of it, Burlinson concluded that the reason why teens are having these pains is because of the spicy foods they are constantly consuming.

Burlinson previously worked at the Santa Clara Valley Medical Center, where she said  she saw this trend begin. Burlinson said that most of the kids in the area were on free and reduced lunches.

“The (students on reduced lunches) come in saying that they have stomach pain and that they have had it for a long time,” Burlinson said. “When you start asking questions, most of these kids do not eat breakfast; either there might just be no food at home, or they just skip the meal.”

Burlinson said she found out that the first thing the teenagers were eating was at brunch, and it was as if they were having Takis or Hot Cheetos for breakfast.

“Then they might have whatever is for lunch, which is not usually super nutritious, and then in the afternoon, for a snack, they are having more Takis or spicy foods,” Burlinson said. “There was a connection that what they were eating, which was this super artificial, spicy food, is the cause of their abdominal pain.”

After talking to many kids about why they eat, Burlinson said many patients said they thought Hot Cheetos and Takis give them energy because of the spiciness.

“It’s interesting because I think there is also a lot of marketing that goes there as well,” Burlinson said. “But they are not really a food, there is nothing that is giving you energy in there.”

Whenever Burlinson runs into problems with teenagers constantly eating these snacks, she makes sure to educate them and people around them that a body needs carbohydrates, fruits, vegetables and protein.

“If you have abdominal pain, you should try eliminating these (spicy) foods for a couple weeks and see how you feel,” Burlinson said. “This should be a treat once in a while, but not a daily part of your diet.”