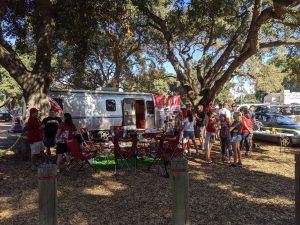 Deep in Stanford’s campus — in between the football field gates 10 and 11, right off the brick pathway — is a quiet spot for most of the year. However, for seven Saturdays between the months of August and November, the spot manifests itself into something completely different: the home of the Druker family’s tailgate.

Tailgates are when people gather around, as the name suggests, the tailgates of cars in a parking lot, typically before sporting events such as football, and incorporate a wide array of games and foods.

“My family has been running a tailgate for about 30 years,” senior Jackson Druker said. “And since 2012, we’ve included our Airstream trailer.”

The family includes a wide assortment of different foods, and a couple specifics, like sausages and lipton onion dip, complete their tailgate, according to Druker.

The tailgate also completely alters the family’s experience watching football, allowing them to be social before the game starts, so that when it does, they can be more serious in the stadium, according to Druker.

“Tailgating definitely changes the way we watch the game,” Druker says. “We get a lot more invested in the game and spend a good time preparing to host the people who come to watch the game.”

Junior Tommy Hall — whose parents are both Stanford alums — said that his family has been running their tailgate for about ten years, and that tailgating itself can often be more fun than actually watching football.

“Often I would just tailgate and get food and have some fun there and then not go to the game,” Hall said. “It’s just a better experience because there’s free food and the stadium overcharges.”

Tailgates are embedded in college football history, such as that of the historic football school the University of Notre Dame in South Bend, Ind.

“[The tailgates are] super extra and huge,” Margi Antonio, a freshman at the University of Notre Dame said. “[But] entire families come so it really brings the community together.”

However, the traditions behind tailgating extend to more than just lifelong football fans, according to Antonio.

“Tailgating has definitely changed my viewing experience of football,” Antonio said. “I don’t really care about football unless it’s at Notre Dame. The tailgates are actually insane; they’re super extra and huge and entire families come so it really brings the community together.”

Tailgating can also generate an interest for the game that may not have initially existed, according to Antonio. Antonio, a graduate from the Singapore American School, said she had never been a fan of football before college and that it was tailgating at Notre Dame that allowed her to become more involved with the game.

“Tailgating makes the game more special because of the spirit that surrounds it,” Antonio says. “It’s a super positive and chill vibe and it generates so much school pride so it makes you enjoy the experience even though you might not particularly even enjoy the game.”

The events are often traditions rooted within families, and can incorporate huge numbers of people, according to Antonio.

“Families have been doing it for decades,” Antonio said. “There’s always at least three generations of families at tailgates, and the age range is from like five to 75-years old.”

According to Druker, regardless of where, and what the occasion may be, the most important part of a tailgate are the people that it brings together.

“The best parts of tailgating are getting together with friends and family,” Druker said. “You can’t have it much better than that.”