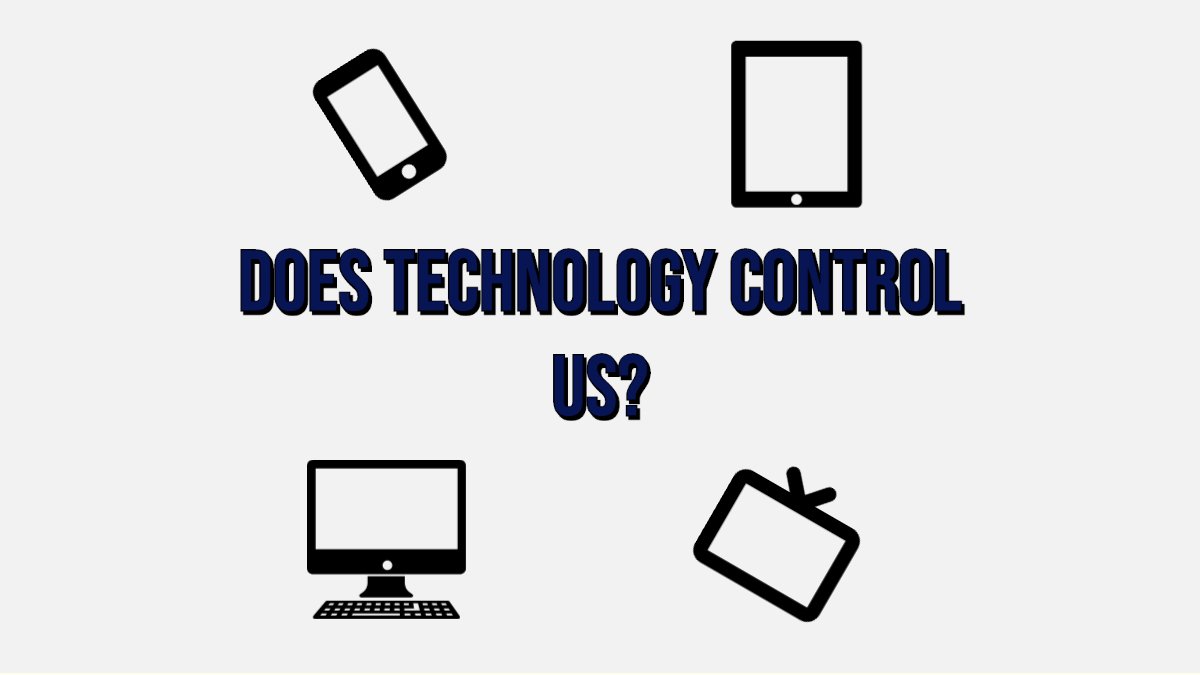 Do we control technology or does it control us?

When the alarm goes off in the morning, the first thing many people do is reach for their cell phones which will only start their typical 4-hour use, according to The Guardian. Technology simplifies our lives, and in the high-tech world that we live in, it can be hard for people to imagine a world without it. Although the use of technology can be beneficial, it has started to control our lives and influenced them, which has caused more overall harm than good. Consequently, we need to begin considering whether we control technology or if it controls us before taking any definitive stance.

Having such a powerful tool at your fingertips makes you more and more dependent on it, eliminating possible face to face reactions. Whether this is in school, a workplace or just around the neighborhood, it sometimes seems that almost everyone’s eyes are glued onto their screens.

While there are positive aspects to the use of technology like creative inspiration, the ability to contacts friends or family, and entertainment, the negatives have clearly outweighed these positives.

“Expectations, impressions, and appearances are so big in social media and sometimes you can get so caught up that you can get spoiled because you don’t realize that you should be grateful for what you have now,” Junior Hyunah Roh said.

As of right now, the best way to reduce phone usage is to unplug and just take a break. According to an article by Jamie Gruman, when you unplug from your phone it gives you time and space to decompress and recharge, making you feel better when you return to a workplace or school. Additionally, taking a break could leave you feeling much happier as you no longer being exposed to other people’s lives and subsequently feeling inadequate by comparison.

Unplugging can give you the opportunity to open your eyes and look at the world around us and how beautiful it can be. In addition to the pleasant views, there are also many medical reasons behind logging off your phone. According to the PC magazine, prolonged use of screens can lead to potential eye damage, inconsistent sleep patterns, the transmission of bacteria, increased stress and more.

In addition to harming our personal lives, technology has also taken over several vocations. Many jobs, especially factory work, have been replaced by machines. According to a study from Oxford economics, there can be up to an increase of 14 million robots in 11 years in China alone. In addition, the study mentioned that the amount of robots installed in workplaces for the last four years is the same as the amount of eight years previous to that date. In terms of what is to come, the study predicts that 1.5 million jobs could be lost to robots by the year 2030. While these stats do seem to be quite frightening, there are many positives to technology in the industry. For example, robots can be programmed to perform dangerous tasks, have consistent accuracy, and work many hours during the week and weekend.

With all of these predictions and statistics, it is clear that technology has started to control us.