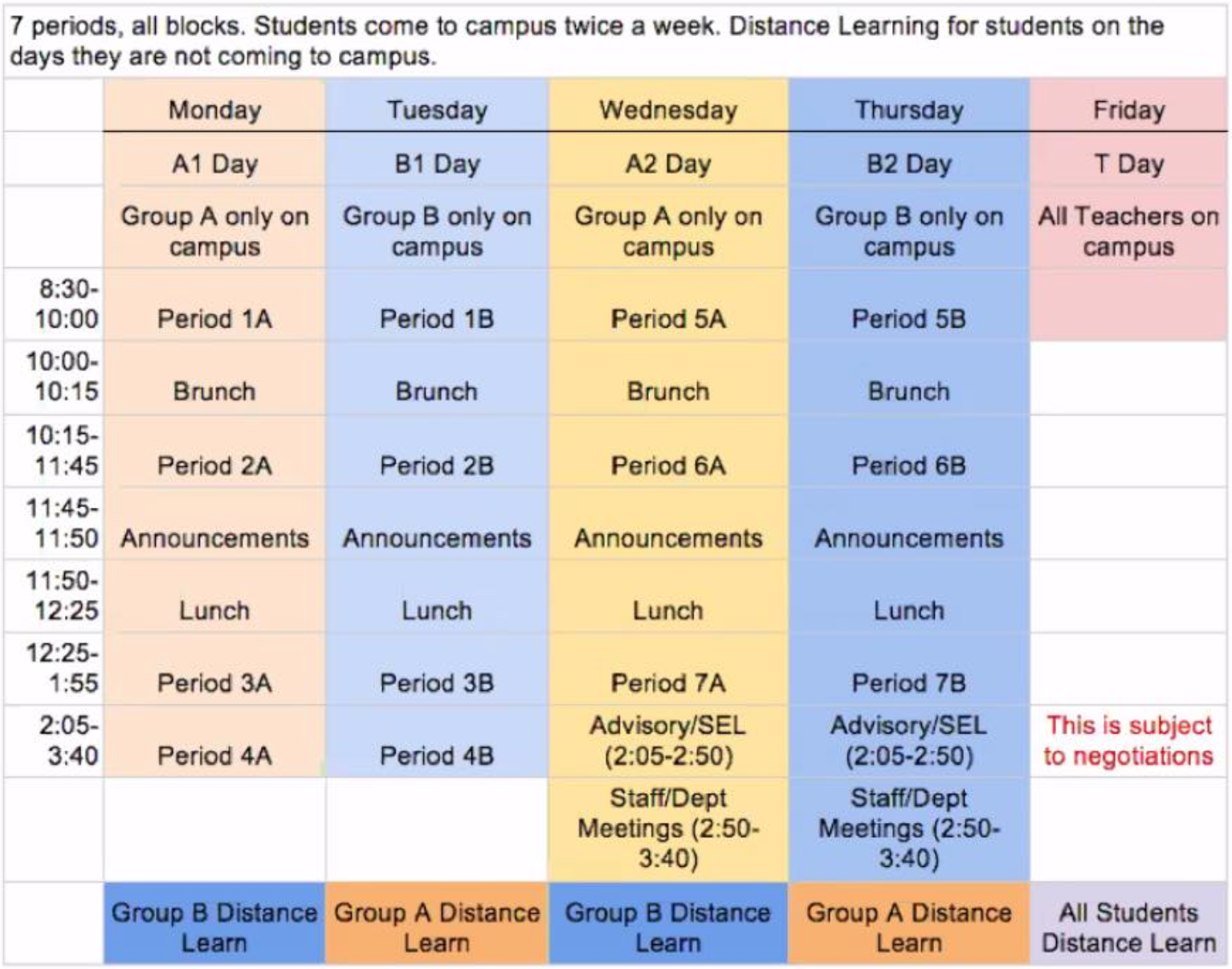 The Palo Alto Unified School District proposed a reopening plan and a new bell schedule for secondary schools for the fall semester of the 2020-21 school year in an online school board meeting on May 12. The tentative fall schedule consists of major changes to the current schedule, including staggered meeting times and periodic distance learning for students not on campus.

Associate Superintendent Sharon Ofek said the proposal stipulates students only come to campus twice a week in order to ensure proper social distancing. Distance learning would account for the remaining three days of the week.

Under the new proposal, students would be separated into Groups A and B, with school days alternating between A and B days. Group A students would attend school in person on Mondays and Wednesdays while Group B students complete assignments from home.

“We would have a prescribed schedule,” Ofek said at the board meeting. “Attendance will be taken, work will be graded.”

In the meeting, Ofek also discussed plans for summer school. Credit recovery courses — in the event that a student fails a required class — will be held through the University of California Scout online program. Popular summer classes Living Skills and Economics will be made available online for students who had previously signed up to take the courses in June or July.

“We have a team of three people building it out, and (summer school) would be driven through Schoology (for Living Skills and Economics),” Ofek said.

Ofek said the school district will also change the summer school schedule in order to give students a break from screen time. As a result, summer school will be pushed to a July start date.

Ofek also said that the bell schedules and opening logistics for secondary schools are being planned first, followed by those for elementary schools.

“The thinking behind the scheduling at the secondary level (is that) we thought that it was important to create the schedule first and build a program around it. At the elementary (level) it’s a completely different approach. We want to start with the program and build the schedule that matches the program,” Supt. Don Austin said.

At the online board meeting, Ofek also briefly explained some of the logistics concerning reopening secondary schools that the school district must consider.

“It is very much an operations piece with procedures for cleaning and entering and coming on campus,” Ofek said. “We are also simultaneously thinking, ‘What if we have to close school again?’ So we’re working on what a complete closure might look like as well. Although I will say more of our energy is on creating that blended learning.”

Ofek also discussed data from progress reports that all teachers submitted last week. The data presented showed 545 unique students at Paly received no credit for one or more subjects, and 2118 students received credit for all subjects. Overall, 92% of course grades received “Credit” and 8% of grades in courses were marked as “No Credit.”

Earlier this week, the school administration asked teachers to rethink giving a “No Credit” grade to students and subsequently reopened the progress report window so that teachers could go back and make any changes from “No Credit” to “Credit” that they deemed necessary.

Paulson later said the progress report window was reopened to give teachers a chance to reconsider the Credit/No Credit distinction.

“We saw a disproportionate amount of (No Credit) grades district-wide and wanted to make sure we were all aligned around the (Credit/No Credit) rubric and also considering the challenges that many students are having,” Paulson said.

In the email to teachers, Paulson did not say what school administrators are doing to help students who received “No Credit” on their progress reports. However, Ofek said teachers and school staff are doing their best to help students receive credit.

“Students are receiving outreach from school sites,” Ofek said. “The principals and their support teams are all working diligently to provide support and intervention and encourage participation.”