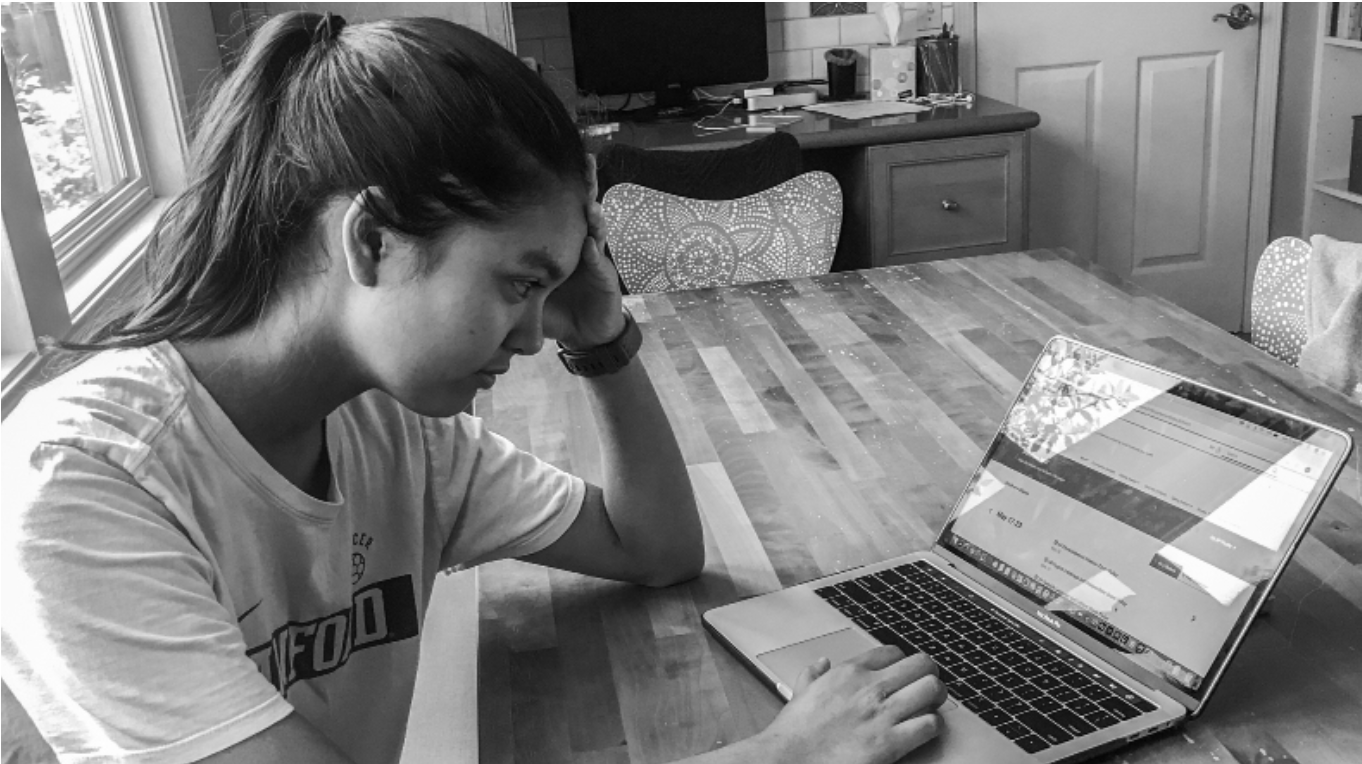 Right before school closed down, junior Ellie Wong said she felt a cloud of stress looming over the students as they walked through the huddled outdoor hallways.

Even during quarantine as she takes a seat to join her next Zoom class, Wong said she can feel this same sentiment of unmentioned stress penetrating through her computer screen.

According to Wong, the college admissions process has become even more confusing now than it was before, creating new stress levels for students.

“The college admissions process was a toss-up before, and it’s even more of one now,” Wong said.

With changes in the school’s grading system, the way Advanced Placement tests are administered and the cancellation of college tours and standardized testing, COVID-19 has added to the uncertainty of the college process, increasing juniors’ stress.

Junior Mia Baldonado said she came face-to-face with these struggles when her college tours were canceled.

“When shutdowns started, I had just begun looking at colleges that were of interest to me,” Baldonado said. “During President’s Day weekend, I had looked at a few West Coast colleges, and was planning on visiting schools on the East Coast during spring break.”

Unable to tour colleges, juniors like Wong, who is trying to decide whether she would thrive in the suburbs or a rural environment, say they are feeling confused.

“I was one of those students planning to visit colleges,” Wong said. “Obviously, the notion of demonstrated interest in college admissions will have to be redefined. Virtual tours are still available, but it’s not the same. I will likely have to reach out to alumni or current students at the schools I am interested in to gain insight into the campus culture.”

In addition to these changes, many juniors are also feeling anxious over Palo Alto Unified School District’s decision to transition to a credit-based grading system.

However, both Baldonado and Wong said they were quick to realize that credit grading is a feasible method, despite originally feeling frustrated that their hard work during the third quarter would not count toward much.

“It’s a little disappointing that I won’t get recognized for my third-quarter efforts, (but) I’m glad that grading has shifted to this system as it levels the playing field for students with different at-home situations,” Baldonado said.

According to Baldonado, the current switch to credit grading will motivate her to work even harder senior year for her grades to make up for the absence of letter grades this semester.

And the changes in the upcoming AP exams only adds to Baldonado and Wong’s anxiety and confusion.

“In AP Spanish, they have removed the reading and listening comprehension sections and writing sections, leaving only two short spoken tests,” Baldonado said. “Since I’m not a native speaker, my weakest point is speaking, so I’m really worried about how that will play out because before, my other sections would have compensated for the speaking section.”

For Wong, the root for her uneasiness regarding AP tests has to do with less clarity about how the tests will work since this is a special circumstance.

“I do not know what to expect for these APs, whether to be relieved or worried,” Wong said.

Wong said the scariest part of the exam is that she can spend her time frantically preparing for the tests by studying in-depth material learned all year, yet only one 45-minute question will determine whether or not students receive credit.

“I think that all scores in general from this year have to be taken with a grain of salt by college admissions committees,” Wong said.

While it’s no surprise that colleges have been discussing contingency plans for the fall 2020 semester, many students fear schools being closed for the rest of the 2020 year due to COVID-19.

This possibility, coupled with current frustration from college students still expected to pay full tuition for a virtual education, might cause more graduating seniors to take a gap year.

“Because more of the kids from high school class of 2020 will be deferring their admission to next year, there may be drastically fewer spots available at schools for prospective applicants from the class of 2021,” Wong said.

Though, according to Baldonado, not all novel COVID-19-related changes have caused more stress.

Most colleges have gone test-optional, which is a relief for juniors who had not taken SATs and ACTs before COVID-19.

“I honestly do not mind that some schools aren’t considering these scores because the SATs and ACTs put so much pressure and stress on students anyways,” she said.

“I hope this affects change in the college admissions process as a whole because maybe they will realize that standardized tests actually do not reflect a person’s smartness and only measure one specific kind of intelligence,” Wong said.

Juniors are constantly thinking about what’s in store for them after high school, forcing most to push themselves to limits, hoping to get into their respective dream colleges.

“I still feel like everyone — especially juniors — thinks about college a lot, including whether or not we get in, what we can do to give ourselves a leg up, and a lot of the time we tie our happiness and value to this blatantly random game called college admissions,” Wong said. “I try to separate myself from this, but it’s very hard.”

Palo Alto, infamous for its competitive atmosphere, is known for fostering a stressful environment amongst its students, especially around college.

“In Palo Alto there’s this expectation that everyone will be going to college and preferably a well-known one,” Baldonado said. “This creates this sort of pressure for everyone to do exceptionally when it comes to grades, extracurriculars, and just life in general.”

According to Baldonado, while the pressure may be a result of underlying parental and societal pressures, Palo Alto has done a better job with working towards eliminating unhealthy stress at school, whether that be through college counseling or mental health resources.

According to Whitney Aquino, Paly’s Wellness Outreach Worker, it is important for students to find outlets to deal with their stress. Aquino emphasizes how important it is to make sure the college a student is looking at is a good fit for them. She also suggests breaking up the application into manageable steps so the process as a whole does not become too overwhelming.

“During this time, it’s important to manage expectations and maintain perspective. Future plans are uncertain for everyone, so it’s especially important to recognize what you can control and try to let go of what you can’t,” Aquino said.

While many of these pressures may come from other sources, much of it has to do with the pressure we put on ourselves as students. Wong said students often compare themselves to their peers and their family.

To change the stigma surrounding college talk in Palo Alto, students will have to redefine success, satisfaction and their source of value to match their own terms, Aquino said.

“This also serves to teach us that no matter how much we prepare for college — whether by participating in multiple extracurriculars or studying hard to get only a certain grade in school — things will happen that we never saw coming,” Wong said. “You can’t plan for everything.”