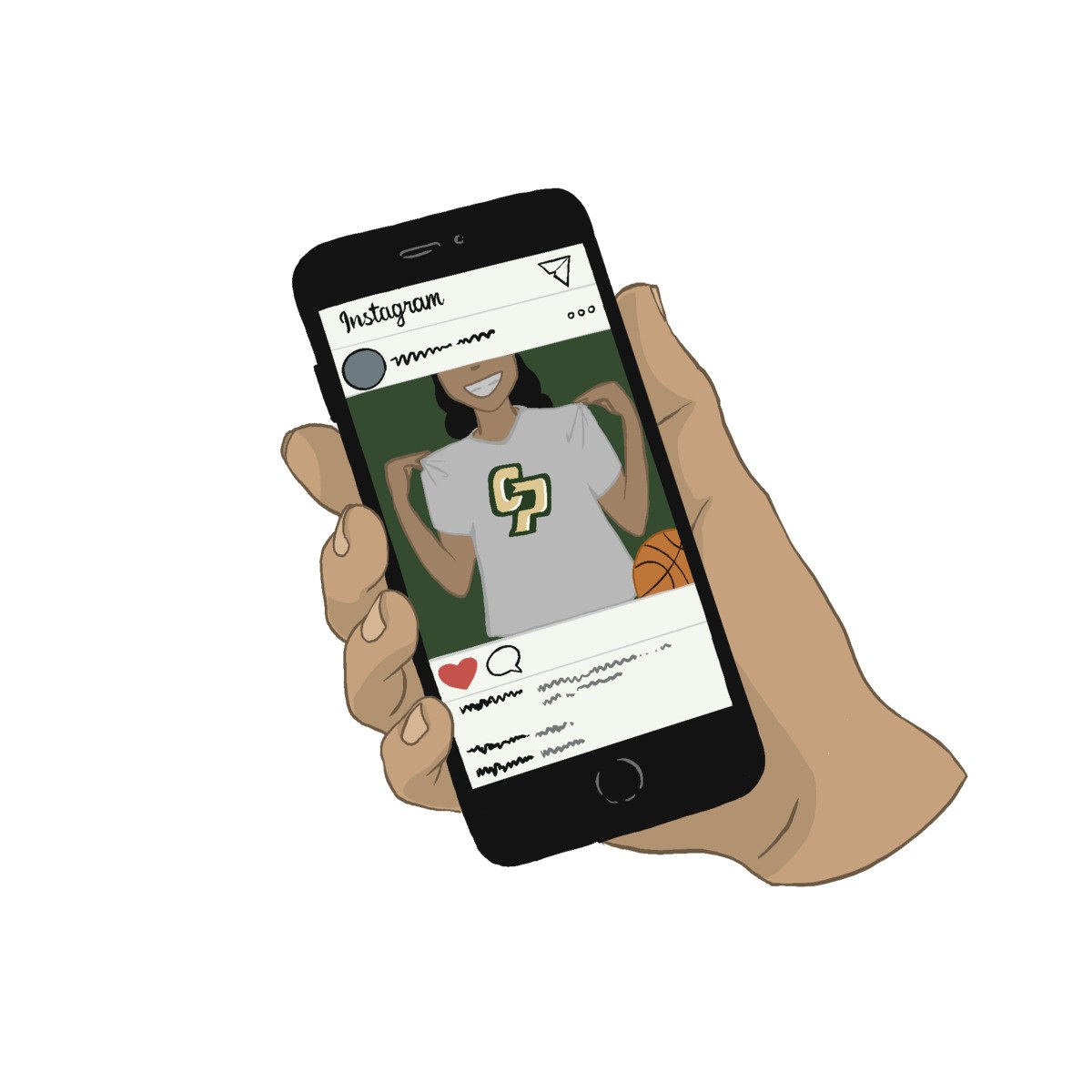 Opening the Zoom link to her first meeting with the Cal Poly’s womens basketball coach, senior Annika Shah felt her heart beat out of her chest. Two years ago, Shah wouldn’t have believed she would meet her future coach via Zoom rather than at a tournament. Despite COVID-19 restrictions, though, recruitment processes for high school athletes such as Shah are in full swing.

Shah said the hardships she faced as an athlete aspiring to be recruited included getting her name out there and onto the digital clipboards of recruiters.

“There are no “in person” visits or viewing tournaments for almost all recruits, depending on where you live,” Shah said. “Due to this, most of us had to individually take action in putting ourselves out there, by sending highlights videos, game film, workouts, etc. In terms of my recruitment process, there were a lot more phone calls and zoom meetings. I was constantly sending stuff out to coaches and putting tapes on social media.”

Shah said she has not officially visited Cal Poly but is staying connected virtually.

“I went on zero official visits, but instead I had Zoom visits where my parents and I and the coaches of the womens basketball program met to discuss academics and athletics,” Shah said. “On top of that, usually programs will give you an offer during your official visit, but I was offered during my Zoom visit. Thankfully, my college was close, so my family and I made a day trip to walk around campus and the area to get a feel for the atmosphere, but it was still different since the campus was empty, and we couldn’t really get a true tour experience.”

“As a high school athlete, coaches are always looking at how you represent yourself on social media,” Shah said. “Personally, I choose to keep my social media usage primarily on just basketball, so anyone looking can see my progress and dedication to the game. Continually posting highlights and workout videos are crucial to gain college coaches’ attention.”

Head basketball and assistant varsity baseball coach Pete Colombo has similar thoughts on social media, saying it is important recruits utilize their social media to advertise who they are as a person.

“They are looking at the content in terms of attitude, language used, videos posted, belief systems. Remember most college coaches are recruiting a person first, athlete second,” Colombo said. “Sure, kids need to be talented but college coaches do not want to deal with bad attitudes, head cases, etc. It is absolutely true that an athlete’s social media tells a story, paints a narrative of that athlete as a person and how he or she would fit into that college’s culture. And yes, colleges do go back in time and look at all past posts.”

Shah also has tips for athletes who hope to be recruited in the future, many of whom are dealing with the same hardships she is.

“College coaches want to see progress and dedication to your sport — in other words, constant clips of you in the gym working out,” Shah said. “When they see this continuous repetition, they can understand and see the time you sacrifice for your sport, and the hard work you put in daily. More directed outside of sports, any little spotting of alcohol or drugs in a picture, even if it was not yours, will automatically direct the coach’s attention away from you. Coaches will infer a lot of things about a player if any bad thing is seen, so as an athlete, you should never surround yourself with that kind of stuff and those kinds of people.”

Next College Student Athlete Recruiting Coach Manager Dan Doyle agrees, saying recruits should use their social media to positively promote themselves and their performance by posting videos, upcoming game schedules and other sport-related content.

“Recruits should absolutely be aware of what they’re posting, tweeting, retweeting, sharing,” Doyle said. “It doesn’t need to be your original post or thought for a college coach to hold it against you on why they don’t want to recruit you. Rule of thumb is, if you’re unsure or if you don’t want your parents to see what you’re posting, you shouldn’t post.”

“Up until a year ago, the traditional recruiting process was a college coach evaluates a recruit at an event or online through film, contacts them electronically and then works to get them on campus,” Doyle said. “Over the last year, much of this has been disrupted by COVID-19. College coaches now must rely on older game film along with skill or workout footage to evaluate recruits until recruits get back to playing a normal season. Campus visits have been replaced with virtual tours and Zoom meetings between recruits and college coaches and their team.”

Doyle said coaches are having to turn more to digital resources such as Hudl and Twitter to find, evaluate and connect with athletes. He said the NCSA is also helping coaches this year by working with them to find film and information on recruits all on a single database.

“Up until a year ago, the traditional recruiting process was a college coach evaluates a recruit at an event or online through film, contacts them electronically and then works to get them on campus,” Doyle said. “Over the last year, much of this has been disrupted by COVID-19. College coaches noWw must rely on older game film along with skill or workout footage to evaluate recruits until recruits get back to playing a normal season. Campus visits have been replaced with virtual tours and Zoom meetings between recruits and college coaches and their team.”