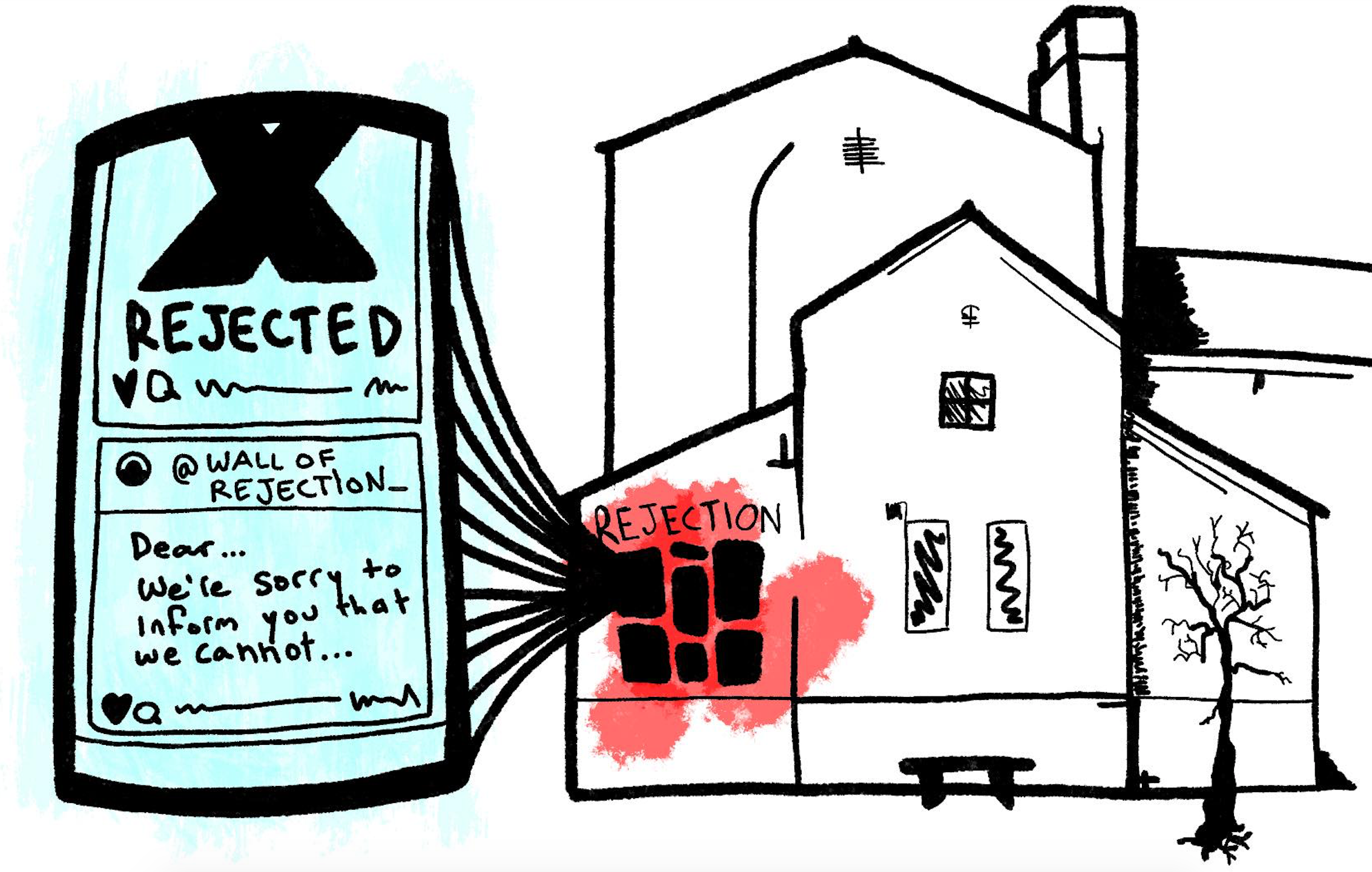 Blacked-out addresses and scrawled retorts cover the college rejection letters that typically span the entire senior deck-facing wall of the Haymarket Theater every spring. For over 10 years, Paly seniors have taped their college rejection letters onto the so-called Wall of Rejection. For the class of 2021, the basic elements that make up the Wall of Rejection remain unchanged. Except this year, the letters are posted online.

Senior David Evans, who runs the @wallofrejection_ account on Instagram, said he started the account because he had looked forward to posting his rejections on the wall for years.

“The wall of rejection was always one of my favorite things about Paly — it’s a big part of our student culture,” Evans said. “Going into a new online year, I saw this void and I just finished up all of my college applications. I figured I’m going to be pretty free second-semester senior year, so I might as well do my part in making the experience as normal as it can be.”

To submit a rejection letter to the account, students can click the link in the Instagram account’s bio and fill out a Google Form where they are prompted to upload an image or PDF of their rejection letter, with or without markups. They can also ask for their comments to be a part of the post’s caption and can choose to remain anonymous. Senior Kevin Zhao decided to submit his Stanford University rejection letter with his name shown to help continue the tradition.

“I’ve always remembered how every one of my senior friends would post their rejections on the wall,” Zhao said. “There were always comments on each letter, and my friends and I always got a good laugh reading them.”

As of March 1, the account had 529 followers and Evans had posted 62 letters. Evans said he considers these numbers both a success and a pleasant surprise.

“We started obviously at zero followers just two months ago, and now we’re at 529, which is more than my entire class put together,” Evans said. “But I’m also getting DMs from other schools on a monthly or weekly basis at this point. I’m just super happy that it didn’t flop because my biggest concern was that I was going to put it up and just make a bit of a fool of myself but you know people enjoy it.”

Although the tradition could not be continued in-person this year, Evans said there are many positives to running the wall online.

Some adults on campus, though, say a wall of rejection contributes to a toxic culture surrounding college admission. College and Career Counselor Sandra Cernobori is one of them.

“Sometimes I think it can convey the message that it’s hard to get into college, and honestly that’s a myth,” Cernobori said. “The reality is that of the 2,300 four-year colleges, 70% of them admit more than 50% of the students who apply.”

Although Cernobori said she understands the idea behind the wall of rejection, she said it’s the unintended consequences that bother her.

“Inevitably, by posting these things, it opens up conversation which can be positive, but what I find happens, and especially among parents, is they start comparing,” Cernobori said. “I’ve definitely had students tell me it actually made them feel dumb by hearing people complaining they didn’t get into (a certain) school when it was that person’s first choice, and they’re dumbing it down.”

And this year’s online Wall of Rejection has caused additional concerns for her.

“But Instagram, where people can comment,” Cernobori said. “I really don’t like that, unless the comments could be disabled. Again, I just worry about it opening up and inviting conversation, which could be healthy, but I think there are other ways we could celebrate acceptances rather than rejections.”

While Zhao said he sees validity in Cernobori’s concerns, he said the wall can actually help students deal positively with the disappointment of college rejection.

“People feel a pressure to appear as if everything is going well, regardless of how they truly feel,” Zhao said. “I think the rejection wall is truly a great way for myself and others to understand that no one is perfect, even at Paly. It gives us a rare opportunity to mourn, cope and laugh off our hurdles together.”

“I think it actually takes away from the elitism and competitiveness because it shows that it’s OK to fail,” Evans said. “We could pretend like nobody gets rejected. We could just not talk about it. We could not have a wall of rejection — or, we can own it. We could be like, ‘Everybody gets rejected. I got rejected from this school, and I’m proud to say that I’m not perfect.’”