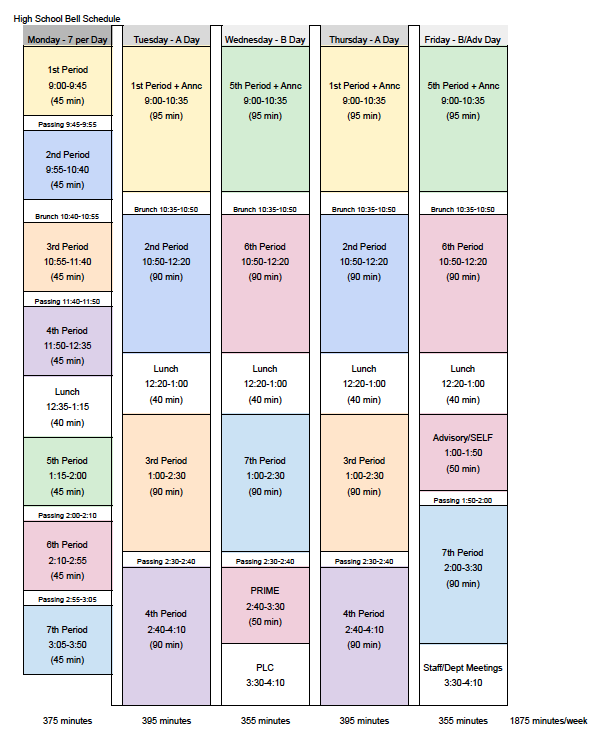 PAUSD’s new bell schedules for the 2021 fall semester were released Friday afternoon by Superintendent Don Austin through Schoology, with the high school schedule adopting a later start time of 9 a.m. every morning.

The schedule plans for Mondays to be seven periods, each 45 minutes, similar to this year’s online schedule. Tuesday through Friday will alternate between A days, or when class periods one through three will meet, and B days, when periods five through seven will meet. Each period on both A days and B days is 90 minutes long, except for the first periods of the day, which allot an additional five minutes for announcements.

In compliance with CA Bill 328, legislation passed in 2019 that mandates high schools to start no earlier than 8:30 a.m, the PAUSD Board of Education asked a committee of community members to plan around a start time of 9 a.m. Austin stated that the benefits of students getting more sleep was the motivation behind this decision.

“We believe in sleep research and respect the guidance from pediatricians,” Austin wrote.

However, with the late start time comes a late end time: on Tuesdays and Thursdays, school is not released until 4:10 p.m, and on Mondays, students are released at 3:50 p.m.

“The late end (time) is a little later than I would prefer, but I personally think that it’s worth it if we get to sleep in later,” Junior Emma Turnbull said. “It’s definitely a bit inconvenient for people who do a lot of activities after school, though.”

Agnes Mar, a junior on the girls varsity tennis team, said she’s concerned that the later end time will mean her classes will overlap more with her practices and matches.

“It will definitely make participating in sports a lot harder because we will have to miss more class,” Mar said.

Turnbull added that she was disappointed to see the continuation of this year’s Monday schedule, where all seven class periods meet.

“I’m not super happy about the seven period day because that’s added a lot of stress and weekend homework for me this year,” Turnbull said. “I would have preferred the schedule we had (last year).”

Austin added in his message that he, the school board and the bell schedule committee are doing their best to work with SCVAL to prevent any overlap of class and sports, as well as implement a policy where no homework or tests will be assigned for seven-period Mondays.

“(The policy) will keep Mondays from test stacking and reduce weekend homework.  This recommendation will be taken and implemented at each of our secondary schools,” Austin wrote.

Austin added that the bell schedule will be officially finalized as soon as the schedule is confirmed to comply with instructional minute requirements.