Rachel Feinstein
News
September 8, 2021
Construction projects around campus to replace outdated climate control pipe systems have frustrated students, but Assistant Principal Jerry Berkson said they should be completed soon.
The most recent wave of construction at Paly began when the Measure A Strong School Bond passed in 2008, which authorized $378 million for various construction projects in the district, former Paly librarian Rachel Kellerman said. Kellerman also said this bond, funded by the Palo Alto community, was the first major one in many years.
“Paly had very little done to it since (the 1970s),” Kellerman said. “So (Paly) was able to get quite a lot of money from that bond, enough money to build the Performing Arts Center, the Media Arts Center, the library and the science
buildings.”
Every construction project at Paly is funded by a school bond. For a bond to pass, it needs to have a 55% approval rate, but Kellerman said the bonds have always passed by a large margin because the community is generous in prioritizing education.
“I can only think of one bond measure that was not supported by the community,” Kellerman said.
The latest construction is the hot and cold water piping project, funded by a new bond, Measure Z. The project is replacing the 80-year-old clay heating and cooling pipes that no longer regulate temperature properly, Assistant Principal and facilities director Jerry Berkson said.
However, many students, including senior Fraser Phillips, have expressed frustration with the construction’s timeline.
“It would have been great if they did this before school started, so we wouldn’t have to deal with this,” Phillips said.
Though many students are frustrated with the untimeliness of the construction, Berkson said it is the most well run project out of the many he has overseen in his 16 years at Paly.
“They are ahead of schedule,” Berkson said. “We were fortunate to get most of the noisy parts done throughout the summer break.”
Though noise may not be an issue, the project has closed many areas of campus, forcing students to take detours. Because critical areas of campus are closed, senior Sophia Henderson said the pipes project is more intrusive than any other school construction she’s experienced, including that of the library and science building.
“The library and the science building were out of the way, so we were still able to walk around,” Henderson said. “With the construction on the quad, and especially in other random places, it’s hard to get through.” 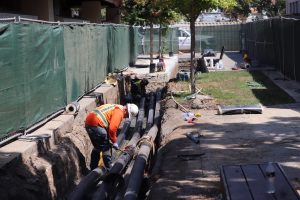 Berkson said the quad will be open to students sooner than the other areas because no pipes are being installed in the quad. Instead, the quad is a convenient and time-efficient staging area for the project.
“The quad was just to put the dirt somewhere,” Berkson said. “They will be re-sodding probably starting next week. It’ll take about two months for it to grab hold.”
After the completion of the pipes project, the next project funded by the new bond is the renovation of the Tower Building. Berkson said this remodel is set to take place in 2022, and will take around 18 months to complete. Renovating such a historic building can be risky, but Berkson said it’s overdue, and most of the remodel will be on the interior.
“The outside will look the same,” Berkson said. “The entire inside will be revamped to accommodate wellness, the nurse’s office and a lot of therapeutic offices.”
Berkson also said all remodels match the original Spanish architecture of Paly to preserve as much history as possible.
“We try to keep the look consistent,” Berkson said. “The mini-tower at the entrance of the football field, the Peery Center and the science buildings all look mostly like the older structures.”
Kellerman said maintaining the original look of the campus makes it a common ground that unites all Paly alumni.
“The place binds everyone together with their memories, good and bad,” Kellerman said. “Preserving landscape and putting in new landscape with the same flow is really important so everyone stays connected.”