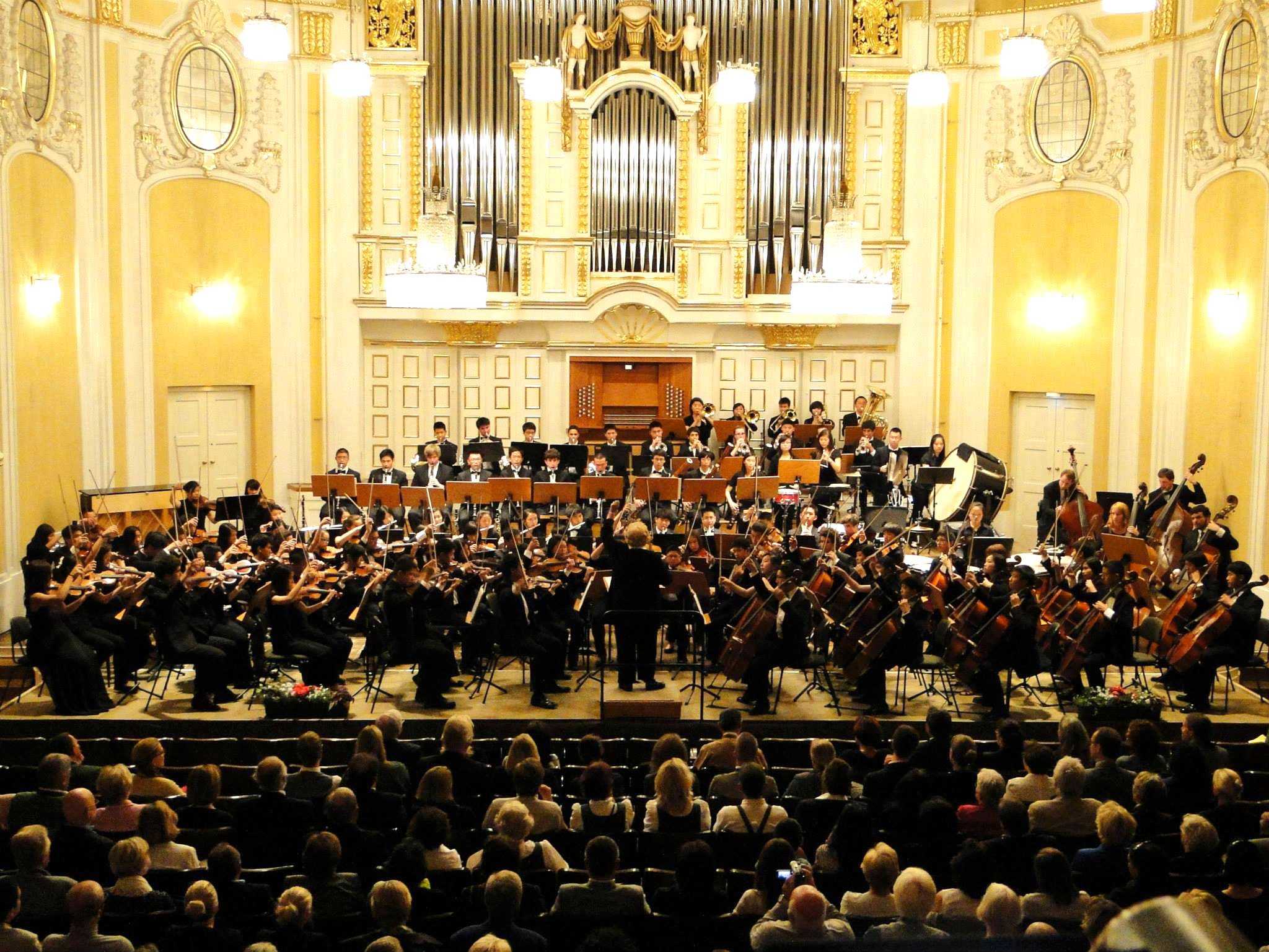 ECYS performs with soloist Yujin Ariza, a Julliard violinist, at the Mozarteum Hall in Salzburg, Austria during its Central European Tour last summer.

As Zuill Bailey steps onto the stage, with his beautiful copper-colored instrument in hand, the eyes of the spectators already begin to bulge. The captivated audience leans in as Bailey’s voluminous hair flies around and his body tremors with the soul-warming chords he plays with the glorious ending of the piece.

Many fail to realize that Bailey is actually performing a classical cello concerto, not a rock or pop culture song on his guitar. With the mesmerizing nature of social media, our generation seems to be undergoing a revolutionary shift towards mainstream music and away from classical music. Although classical music is dormant on the Billboard Hot 100, there still exists a world where the greats like Mozart and Beethoven are celebrated — a world in which classical musicians thrive.

“I think people our age don’t appreciate classical music because they don’t understand it,” senior William Yang said. “It is the most theoretically complex genre and takes a certain level of musical profundity and exposure.”

School music programs are generally rudimentary because they must accommodate all levels of music players, and this seems to influence students’ belief that classical music is humdrum and boring. However, the Bay Area itself exemplifies the existence of this classical appreciation with its abundance of symphony level youth orchestras, including the prestigious San Francisco Symphony Youth Orchestra (SFSYO).

Sponsored by the San Francisco Symphony, SFSYO not only shares the same grand practice and performance space, Davies Symphony Hall, but its coaches also consist of Symphony members. SFSYO also offers a multitude of benefits for its musicians including free membership, unlike any other youth orchestra in the Bay Area. String players receive complimentary strings and bow hair every couple of months, making it one of the most desired and selective orchestras for young musicians in the area.

“I know some musicians in SFSYO and I have a great deal of respect for their program because they have some of the best musicians in the Bay Area, and I know they have great conductors, too,” Yang said. “However, the culture around SFSYO is that kids are competing to beat out one another, and the focus is on performing rather than educating.”

Palo Alto Chamber Orchestra (PACO), the organization that Yang participates in, differs from the big symphony style programs in that it focuses on chamber music, so it only contains string players, including violin, viola, cello and bass.

“Not only does playing chamber music allow me to branch out and make friends, but it has also really helps make me a better musician overall because it really forces me to listen, and makes more cognizant of how different parts fit in together, and I have to be more attentive to know how and when to blend in, or stick out,” Yang said.

Also a selective orchestra in the Bay Area, the El Camino Youth Senior Symphony (ECYS) offers a similar professional experience for youth musicians including annual competitions where winners receive a solo experience with the accompaniment of the entire symphony. Every two years, the symphony also goes on tour with a professional solo artist and has recently performed in world-renowned halls such as Franz Liszt Hall in Hungary and Rudolfinum’s Dvorak Hall in Prague. It offers musicians the opportunity to learn the universal communication through music.

“ECYS is a great way for me to experience being in a symphony and is probably something I won’t be able to do for the rest of my life,” junior Alex Hwang said, a former member of the Paly orchestra. “Tour in Central Europe was amazing and I made a bunch of new friends and had some unforgettable times.”

Classical music is more than the dull, obsolete genre our generation generally makes it out to be. Its artistic intricacy makes it an outlet of expression — a medium in which people can manifest their emotions.

“I’ve been bullied before and to be honest Paly isn’t a place where I always feel safe being myself,” Yang said. “Playing classical music really gives me a chance to separate myself from whatever stress I face in my everyday life.”

For a large part of the youth population, classical ensemble music, specifically the struggle of finding the perfect harmony, the highly complex yet unadulterated ring, between every musician’s unique style serves as a coalescing language. Classical music takes more than just an ear for pleasing euphonies but proves to be a mental challenge and takes dedication to acquire the sensitivity needed to appreciate it.

“There’s something about devoting hours to the challenge of practicing your music then mixing your part with others’ to produce harmonies that’s beautiful,” Hwang said.