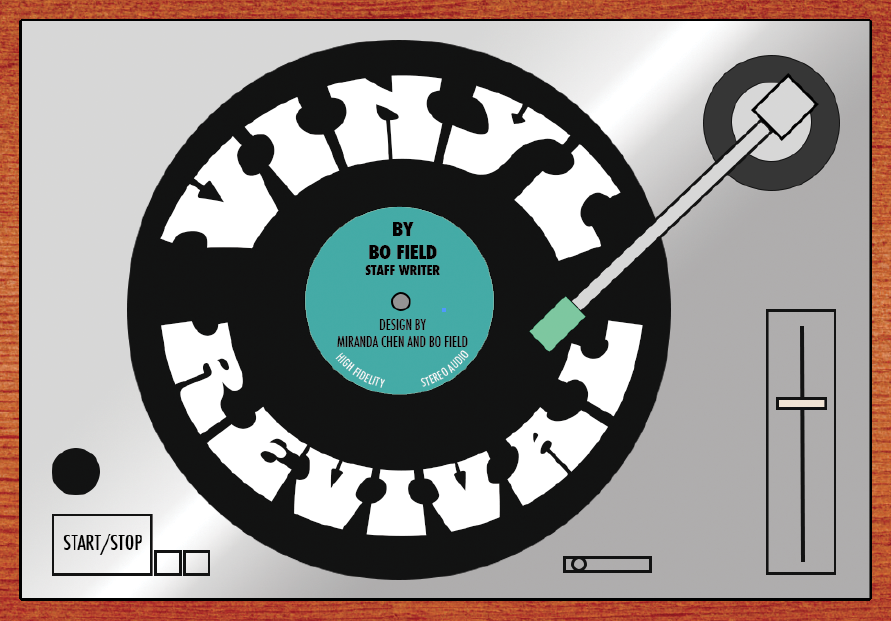 Ever since it began its slow revival in the late 2000s, music on vinyl has been dismissed by many as a token possession of pretentious, delusional hipsters holding onto an obsolete format simply for its style or its irony. The same people making these assumptions then go home and listen to compressed, low quality mp3s through their Beats by Dre headphones and think it sounds great because they can hear some semblance of bass for the first time. Vinyl is making its comeback not just because it’s fashionable or for its aesthetic value, but because of its superior sound quality relative to most of the compressed digital formats of today. Music listeners should be able to hear sound the way the artist intended it, with no concessions, and with a reasonable investment in a good system, the listening experience is completely new.

When music switched to mainly digital formats, audio compression was created as a way to reduce storage space needed for audio files used for personal storage, distribution through CDs and radio, and later streaming and sharing on the internet. Many compression algorithms and codes were introduced, and the most popular became the mp3. Along with the other major compression file type mp4, which was made ubiquitous in digital music through iTunes, these two files are the only formats most people ever hear of or use. Lossless, uncompressed digital file types do exist, such as wav and FLAC, but they take up much more space and were deemed inferior by the powers that be in the interest of storage. Quantity over quality, right?

Mp3s and mp4s are flawed formats due to the process behind shrinking the files. Compression codes are created to pick out certain frequencies from the original lossless file that are considered inaudible or unnecessary. This sounds logical at first, but if, for example, a very high frequency exists at the same time as a very deep bass frequency, the compression code could cut it out assuming we only focus on one at a time. In addition, even audible frequencies could be cut out in the interest of saving space depending on how small the file is being compressed. Essentially, a computer algorithm throws away sounds it assumes you don’t need so it can save more space for itself. This process is selfish of the computer, condescending towards the capabilities of human hearing and with today’s current storage capabilities, quickly becoming unnecessary.

However, if we go a couple steps back chronologically, there’s a format that isn’t squashed through any digital sausage press between the studio and your ears,  gives you all the frequencies you deserve and looks great sitting in your room or while it’s being played. The revolutionary invention of vinyl recording has been around since the 1800s, and the first high-fidelity stereo records were produced in 1933. People in the early 20th century could have been listening to better sound quality than your Beats could ever deliver. Thankfully, it’s easy to break out of the five-minute foot rub that is digital music and start getting the auditory full-body massage you truly deserve if you have a little determination and some hard earned cash.

First, you’ll need a turntable. Due to the recent spike in vinyl’s popularity, a variety of models from different manufacturers are readily available at retail music stores or online. As with most purchases, you get what you pay for, and sound quality will definitely suffer with cheaper models, defeating the original purpose. This is something better saved up for. Instead of going for the amazing deal you found on eBay, it’s worth dropping at least $100 or more on a better quality model. Companies like Crosley and Audio-Technica have more affordable players that are intended for analog-to-digital conversion, but can still be used just to play records with excellent quality. More expensive models, such as the Pro-Ject Debut, will set you back a little farther financially, but boast incredible playback capabilities and stylish designs that will leave your friends drooling at your feet in awe of the sonic fidelity god that you have become.

The next investment you’ll have to make is quality speakers. The selection can seem daunting and threatening to your wallet at first, but you can get what you need from anywhere as low as $100 to up in the thousands, depending on how much income you’re willing to spend in the pursuit of superior sound. A stereo setup is the most compatible with your average turntable, and these can be sold as pairs of speakers or individually, in which case, buy two. Depending on the bass capabilities of these speakers, it might also be a good idea to buy a subwoofer of a decent size. To put all of these together with the turntable, a receiver console is needed. These can also vary in quality but not as drastically, and anything with enough input and output plugs will do. Having a receiver also makes it easy to switch between audio from your phone or computer and your turntable at the turn of a dial. These can all be found at stores like Best Buy or Fry’s Electronics, and can be bought at great prices second hand as long as they’re in good condition. Tip: go to Goodwill.

Finally, you’ll need some actual LPs. LP stands for long play, used in the industry to denote a full album length. These, along with the shorter EPs, or extended plays, come in either the wider 33 1/3 rotations per minute format or the smaller, more compact 45 rpm discs. Many modern turntables will play records at both speeds, but some only work for one kind so make sure you know what yours can and can’t play. Most modern record labels are in tune with the demand for vinyl, and the majority of new releases along with pretty much everything released pre-digital, are available in vinyl format. Although slightly more expensive than the average CD or digital downloads, LPs often come with cool extra stuff like posters or lyric booklets to thank you for shelling out the extra money. In addition, some people enjoy having their album art larger than a 500×500 pixel thumbnail and LPs allow true appreciation of the effort and design that goes into an album’s visual aesthetic. Good places to buy records are Rasputin Music, which has various locations around the bay, Vinyl Solution Records in San Mateo and Amoeba Music in San Francisco and Berkeley, which doesn’t rival Rasputin’s selection or pricing but does sell cool T-shirts. Some of the best LPs are found in Rasputin’s bargain bins, containing a plethora of obscure rock, jazz and soul albums and Hip-Hop singles from the ‘90s and early 2000’s, on sale for 50 cents to a dollar.

In conclusion, you’ve been cheated out of superior sound quality by compressed digital media and inferior sound systems, and the sooner you pursue an interest in vinyl collecting, the closer you are to unlocking an entirely fresh sonic experience. If you’re interested in music and quality sound or just looking for a good way to burn through your summer job money, vinyl collecting is a rewarding and fascinating pursuit. With a decent amount of money and anything more than a basic knowledge of music, you too can ascend to the next dimension of auditory bliss.