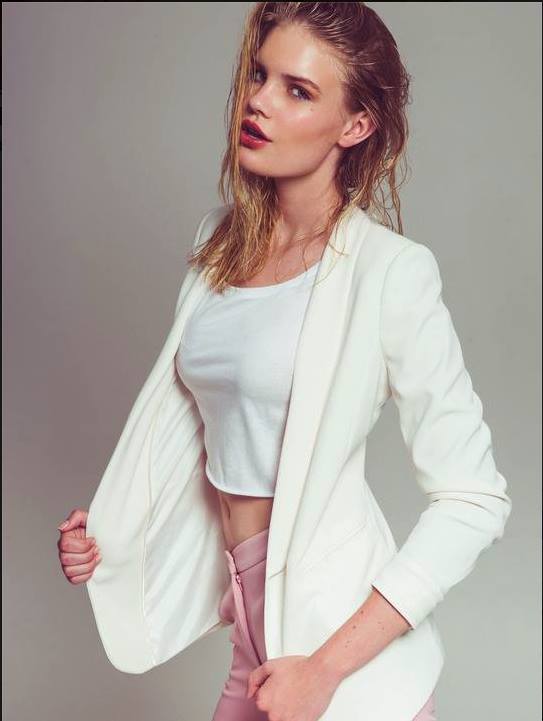 Balancing school with sports or clubs is a challenge faced by most students, but focusing on academics while also modeling for magazines across the world is a different story. For junior Ellinor Saltin, it has become her flourishing passion throughout high school.

Only three years ago, the 5-foot-10, 17-year-old Swedish native had never thought of becoming a model as an attainable dream.

After agencies asked her numerous times to consider joining the fashion world, Saltin finally decided to pursue it.

“The first time I got asked to become a model, I started crying because I was so scared,” Saltin said. “I thought I totally did not fit [the standards of] a model, but after I got asked a couple other times, I was like ‘okay, maybe I should try [modeling], because it could be pretty fun.’”

Saltin was first asked to join an agency while shopping at a mall in Sweden at the age of 13 but waited another year, until moving to Spain, before posing for her first photoshoot in Majorca, Spain.

“[My first shoot] was with a famous photographer, Nicole Langholz, from Holland, for Women’s Magazine,” Saltin said. “I was scared but it was fun.”

Now, two years later, Saltin already has a contract with Next Models in Los Angeles, Tyra Banks’ agency, as well as four others in Sweden, Germany and Spain.

Her “mother agency,” Sight Models, located in Barcelona, was the first agency that discovered her and works personally with the development of her career.

Despite her abundant career opportunities, Saltin has decided to focus on school after moving to Palo Alto in the beginning of her freshman year.

“Right now school is my main priority, and I know that it’s really important,” Saltin said. “That’s why I can’t take off a week or two to go to Europe, I have to do [school work] first.”

Saltin has lately had to reject multiple jobs from well-known designers due to her dedication to her academics.

“Last year I got asked to do a runway for Burberry, Gucci and Yves Saint Laurent,” Saltin said. “But because of school I never had the chance to go.”

An additional obstacle Saltin has faced is the different age requirements the U.S. has for models, and until recently, Saltin had been unable to walk the runway as runway models must be over 16.

Although Saltin has done seven or eight jobs for top magazines across Europe, as well as various editorials, she has yet to do any photoshoots or  walk runway in the U.S. because agencies tend to prefer models 16 and over.

“Before you are 16 it’s very unusual to get a lot of work since you’re still quite young,” Saltin said. “It’s more like preparation for future jobs.”

With her early start in modeling Saltin has already made post high school plans with her “mother agency.”

“I’m going to take a gap year after I graduate and start working more, because I love traveling, and my agency is really supportive,” Saltin said. “I’m going do things in Paris and Milan.”

Saltin wishes to pursue a career in modeling as long as possible, yet obtain a college degree and have another profession after modeling ends, possibly in graphic design.

But while her passion continues, Saltin wishes to pursue more bridal shoots after her first experience with Prinovias Wedding Dresses.

“I love bridal because it is very different from other kinds of shoots,” Saltin said. “The dresses are beautiful and the make-up is very natural.”

The make-up may be natural, but the shoot itself is most definitely not.

The modeling agency appears glamorous, but according to Saltin, it too can be difficult.