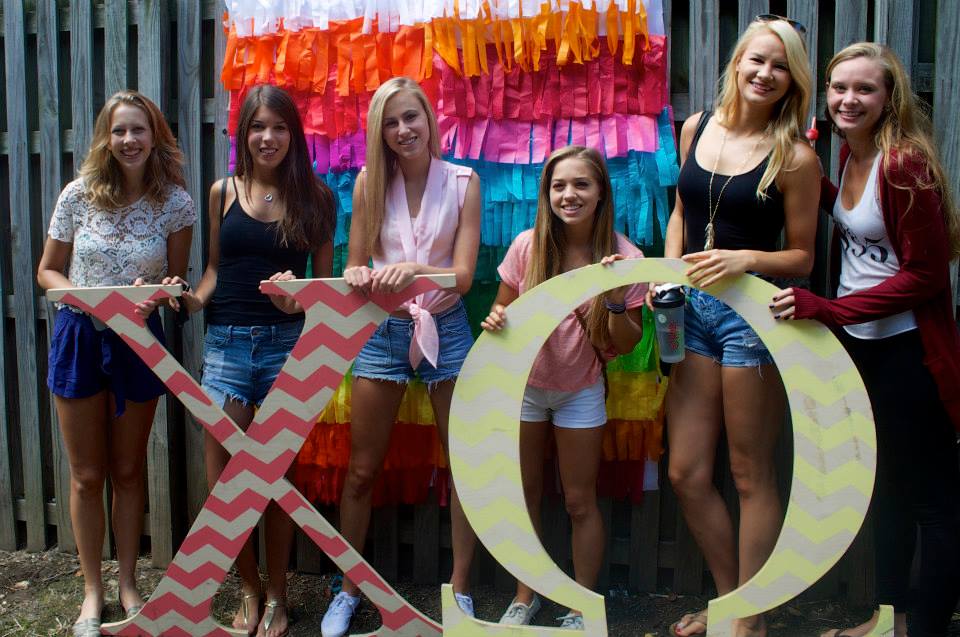 Paly alumna Nadya Nee (third from the right) at an event with her Chi Omega sorority sisters at the University of Pennsylvania.

Now that spring has sprung onto us, second semester seniors are playing the waiting game when it comes to college acceptances. With the anxieties of applying behind them, soon to be graduates can finally start looking forward to the college experience.

Many factors contribute to the debatable idea that college is the best four years of one’s life, but this is often attributed to the experiences students in Greek life share. While not all colleges in the United States have a Greek system, there are currently over nine million sorority and fraternity members in the nation.

According to the Merriam-Webster Dictionary, a fraternity is “a local or national organization of male students, primarily for social purposes, usually with secret initiation and rituals, and a name composed of two of three Greek letters.” Over the years, “frat” culture has evolved into so much more, garnering a negative connotation for the Greek system in general.

More recently, a fraternity related incident grabbed the nation’s attention at the University of Oklahoma, when a video of Sigma Alpha Epsilon members taking part in a racist chant went viral. The University disbanded the fraternity and expelled two of its members. These instances go farther than -isms, pushing legal boundaries of vandalism and hazing.

In January, three University of Michigan fraternities allegedly did tens of thousands of dollars worth of damage to two Michigan ski resorts.

These unfortunate occurrences have created the stereotype that all fraternities and sororities are associated with hazing, drinking and partying. Unfortunately this assumption has some truth; according to USA Today, there has been at least one death related to hazing per year since 1975. Binge drinking is responsible for 82 percent of these deaths.

Comedy actor Will Ferrell, who himself was a fraternity member during his time at the University of Southern California, reacted to the Oklahoma incident by suggesting to shut down the whole Greek system altogether.

“Because when you break it down, it really is about creating cliques and clubs and being exclusionary,” Ferrell said.

“Fraternities were started as academic societies that were supposed to have a philanthropic arm to them. And when it’s governed by those kind of rules, then they’re still beneficial. But you gotta be careful.”

Due to the sensationalist tendencies in the media, the hazing scandals are making headlines, while fundraisers and philanthropy events generally do not. There are just as many positive statistics regarding Greek life as deterring ones.

According to USA Today, 85 percent of Fortune 500 executives were part of Greek life, and college graduation rates are 20 percent higher among Greeks than non-Greeks.

Palo Alto High School alumna Natalie Brock, who is currently a member of Delta Gamma sorority at Southern Methodist University, believes getting involved in Greek life has been one of the best decisions that she has made in her college career.

“My sorority has given me so many things, including ways to get involved in campus, ways to improve in school, and friends that will last a lifetime,” Brock said. “Greek life will take you past college, I’ve been connected to employers who also happened to be Greek, and it helped me get [my] job. One of the main misconceptions about Greek life is that were all snobby brats who hate each other, and all we care about is partying, which is just completely untrue. We rarely are recognized for the good things we do, such as raising millions of dollars for philanthropies every year, or being one of the top fundraising groups for Relay For Life every year.”

Lauren Hammerson, a Paly alumna and graduate from Loyola Marymount University, was a member of Alpha Phi. Her opinion towards the Greek system aligns with Brock’s, as she views it as something solely beneficial to one’s college experience.

“I think the greek community and sororities norms/values/general attitude completely pertains to the college campus you are looking at. But that is my own experience that I to be true within my sorority,” Hammerson said. “Someone else could have an entirely different experience, just depends.”

Although sorority members have the stereotype of being shallow and overly consumed with social status, “frat guys” are thought to be racist, sexist, and crazy party animals.

Paly alumni Connor Fitzgerald and current member of the Delta Chi fraternity at Denison University thinks that some of the stereotypes regarding fraternities are true, but do not define them whatsoever.

“I was lucky enough to be social Chairman, rush Chairman and President, so it was a lot of responsibility which was a good experience for me,” Fitzgerald said. “Least favorite part is the politics/rivalries between fraternities, fairly similar to cliqueness in high school. At my school the majority of houses that are not affiliated with a sports teams are looking for good guys with big personalities. Knowing someone in the fraternity can definitely help you get a bid, but what is more important is your conversations and actions at parties and other social events. A stereotype I saw to be true would be that fraternities dictate the social scene which can definitely be frustrating for those who are not affiliated.”

To pledge or not to pledge is a personal decision, but the negative stigma in society should be reconsidered because at the end of the day, it is up to the future students to define the reputations of Greek organizations.