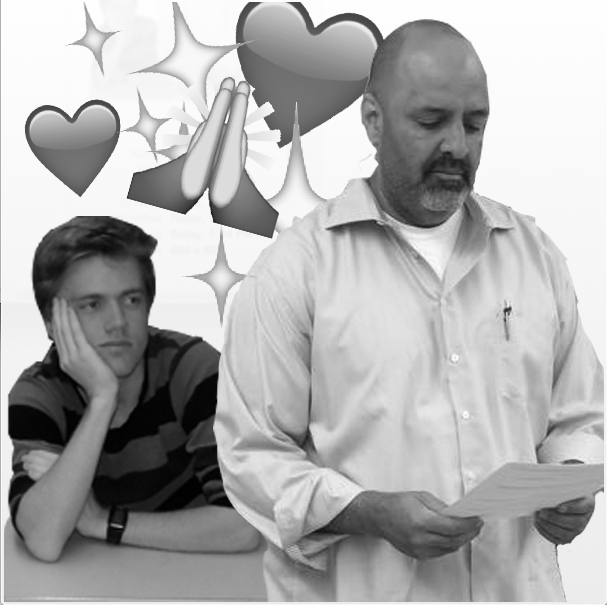 Teachers include life lessons in their curricula

Life advice from fellow students can often come off as both hypocritical and uninformed, so where should you really be looking for helpful tips? In the past, my answer would have been Yahoo Answers to all of my pressing questions: “How many times is it socially acceptable to text a girl with no response??!!”  “What should I wear on a first date?” and “Tips for manscaping”. But after sitting through a year of lectures by AP Chemistry teacher Ms. Sylvestri and U.S. History teacher Mr. Cronin, I can guarantee you that the answers are lying right in front of you every period of the day. You just have to listen closely and read a little between the lines.

As those of you taking the April ACT found out, fast food is such a major part of our lives that sometimes taking it away can seem extremely daunting. Its food is meant to be cheap, look good and taste mediocre. But despite the golden buns and seemingly juicy patties, Burger King’s slogan is filled with many promises as empty as the calories of its burgers. As Ms. Sylvestri tells us, chemistry doesn’t let you choose what it’s going to do, and neither does life. The Maillard reaction will only happen above 130°C and the hot guy isn’t going to ask you out until fate lets it happen. No matter how much you may want it to be true, you just can’t have it your way.

No excuses. Coaches have said it, weightloss campaigns have said it and now Ms. Sylvestri has said it. The work that you’re going to have to do is not just going to go away, and the things worth doing of course require some effort. And for that, God gave us Fritos (or whatever your chip of choice happens to be). So drown in your half-gallon tubs of ice cream while you sit down to watch the newest episode of The Bachelor (except not this year because “countryboy” Chris Soules bored us all out of our minds and the girls’ looks didn’t make up for any of his shortcomings) without shame because we all have multiple midnight snacks when we give up on a limits homework or don’t want to read anymore Shakespeare.

“Don’t start none, don’t be none.” — Justin Cronin

For those that claim to not want drama in their lives, (I’m definitely not one of those people) a sure lot of them “start some.” You can always be the better man no matter what the situation. As Jordan Baker in “The Great Gatsby” put it, “It takes two to make an accident.” Now whether that’s just a euphemism I can’t be sure, but just always know that getting stuck in the thick of an argument or lovers’ quarrel is done out of your own volition. It’s always up to you to decide if you want to be on the next World Star Hip Hop clip, so don’t throw the first punch.

“Somebody has to be the lifeguard of the gene pool.”

I’ll just leave the literal meaning of that up to you guys to interpret, but there’s always got to be a lifeguard of every pool. Not everyone can just have fun all the time, so don’t be the douche that always refuses to be the “lifeguard.” Be a lifeguard out of empathy and kindness but also out of personal gain (because that’s why most of us do anything anyways). Everyone should have the opportunity to be in control of a situation and hold all of the responsibility. It’s a test that all of us as humans must endure. And as to the gene aspect of it, just don’t hookup with any loosely related cousins.