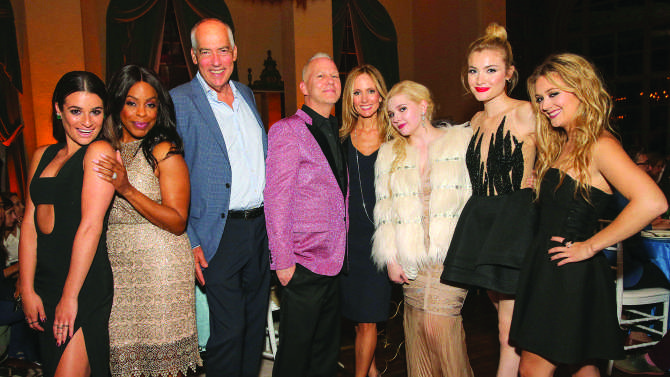 Despite the incessant wave of promotion for Ryan Murphy’s new horror-comedy, “Scream Queens,” the premiere was an entirely predictable disappointment, showing little difference from Murphy’s previous shows, “Glee” and “American Horror Story.” “Scream Queens,” which is intended to mock horror movies, centers on the murders of the members of an elite sorority, Kappa Kappa Tau, run by the rich and entitled Chanel Oberlin, who is portrayed by Emma Roberts.

Within the first five minutes of the show’s premiere on Sept. 22, Chanel gives a monologue on what it is like to be president of the top sorority on campus and how blessed she is to be in such a position. After introducing all of her minions, Chanel describes the woman scrubbing the floors of their house, introducing her as “Ms. Bean,” but later referring to her as “white mammy,” calling her “essentially a house slave.”

Murphy prides himself on focusing on those oppressed and underrepresented in the media. He has been praised for filling his shows with people who would not normally be cast in other mainstream TV shows.

As the poster boy for representing the bullied and marginalized, Murphy sure has a lot of problematic depictions of race, racist jokes and racial stereotypes in all of his works.

“Glee” seems like it would be the exception to the rule, with one of the most diverse casts on television. But Murphy ended up only marginalizing minority characters further by pushing them to the sidelines. For the most part, the characters of color were only there to push the storylines of the white characters forward. The only black character to have even half the presence of a white character was Mercedes, played by Amber Riley. Unfortunately, Mercedes’ character was only there to pander the stereotype of the sassy black girl with a great voice and was usually there to heighten Rachel Berry’s, who is portrayed by Lea Michele, success. Despite these problems with “Glee,” the show was highly successful, going on for six seasons and winning upwards of 30 awards.

Murphy dealt with race much more explicitly in the third season of “American Horror Story,” “AHS: Coven.” Kathy Bates played a 200-year-old slave owner in New Orleans named Madame Delphine LaLaurie, who brutally tortured and murdered all of her slaves. When her severed head meets Queenie, who is portrayed by Amber Riley, the only black witch in the coven, LaLaurie speaks to her as if she is one of her slaves. Queenie then forces her to watch footage from the Civil Rights movement and clips from the movie “Roots.” By the end of the episode, despite her boasting that she had not watched any of the film, LaLaurie is visibly moved and there are tears streaming down her face as she realizes that her unjust actions towards her slaves were atrocious.

This feels like the start of the road to redemption for LaLaurie, which is undeserving. Much of LaLaurie’s history is shown in flashback clips and all of them are horrifying to watch. One particularly graphic scene included Madame LaLaurie using her slave’s blood as her face moisturizer. Now are the viewers are supposed to feel sorry for her because she realizes she made a mistake? Even in the show, Queenie begins to sympathize with LaLaurie. It seems like the viewers are supposed to push the obvious racial issues that LaLaurie represents to the side just because she learned a valuable lesson.

“She’s a sadistic psychopath, not only sadistic to her slaves, but to her daughters, too — and you don’t recover from being that kind of person,” critic Kera Bolonik said to Medium Magazine after the series’ initial run. “It’s who you are, even if you’ve been buried alive with your own thoughts for 200 years.”

“Scream Queens” is a continuation of Ryan Murphy’s traditional “satirical” humor as seen in the first five minutes, and it continues to escalate from there. Towards the end of the 2-hour episode, Chanel begins hazing the pledges, one being Zayday, who is portrayed by Keke Palmer. Chanel begins writing all of the pledge’s flaws on their half naked bodies with black eyeliner, and when she gets to Zayday, greets her with “Hello, hoodrat.” She then proceeds to explain that she needs to go upstairs to get white eyeliner in order to be able to read the words on Zayday’s black body.

Pledges and sisters both react to these actions with a headroll. It seems that these responses are indications that this is something that the audience can just gloss over.

Murphy and the stars of his shows have defended his brand of humor by categorizing it as satire. And yes, all of his shows definitely have their moments and, judging by his viewer count, huge amounts of people find Murphy hilarious. But it gets less funny when the racist jokes are the only dialogue present. “Scream Queens” is meant to be a satire of a system that is traditionally very unfair — the Greek system — but instead of being funny, most of Murphy’s jokes are mean and so blatantly racist that they make viewers uncomfortable. It makes it even worse while realizing that Murphy is openly gay and, as a member of a minority, should be much more sensitive with the types of jokes he is making in his shows.

What is most disappointing about all of this is that Murphy’s shows are actually kind of good without the underlying racist theme. If he could just gravitate away from what he is used to and what viewers are used to seeing from him, he could produce some seriously funny content. It is time to forget the ‘laugh-at-hatefulness’ routine and move on.