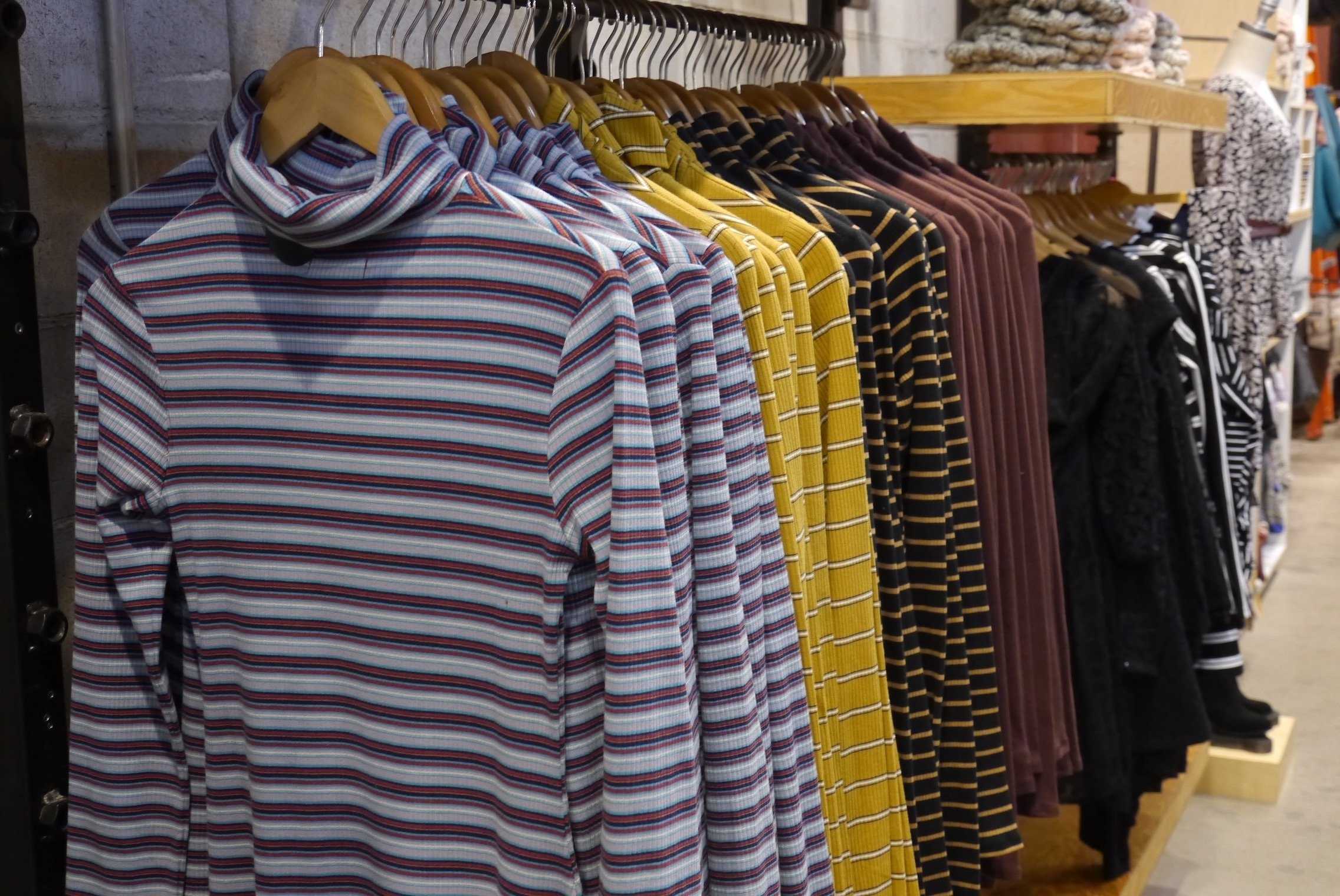 Retailer, Urban Outfitters, with a store location at Stanford Shopping Center, faced controversy over its past clothing releases.

Lifestyle
October 30, 2015
Patterned dresses, thin crop tops and pajama shorts can be seen all around the Palo Alto High School campus, popularized by the Italian company Brandy Melville. The majority of the company’s stores are located throughout California, with a location opening in Stanford Shopping Center this past summer.

It is easy to fall weak to the Brandy Melville spell: they sell fashionable clothes offered at reasonable prices. However, there is a catch — regardless of how far someone rummages through the clothing racks at Brandy Melville, they are not going to find a variety of sizes. The enterprise does not sell clothes by size, as their clothes are only made in one size.

All clothing in store is labeled with either “one size” or “small.” The majority of the skirts available on the store’s website have a waist measurement capable of stretching to about 25 inches, which is a size zero or two on denim size charts. By contrast, according to the U.S. Center for Disease Control, the average 16-year-old girl in the United States weighs 137 pounds and has a 31-inch waist.

One of the probable business incentives for this policy is the efficiency and increase in profit margin that comes from not needing to produce multiple sizes of clothing. Another  in-store convenience is that the process of trying on clothing items is shortened because people do not have the option to try on other sizes if the initial item does not fit them properly.

Other previously popular retailers of young adult clothing have started to experience significant loss, with Abercrombie & Fitch closing 60 stores in 2014, at the same time that Brandy Melville was becoming one of the most popular teen brands.

None of the success that Brandy Melville has gained was due to traditional advertising. The popularity of these brands can be almost solely attributed to social media buzz. American Eagle has attempted to copy Brandy Melville’s “one size” sales technique in order to attract more customers. In September 2014, American Eagle attempted to revamp its look by opening a pop-up shop called “Don’t Ask Why” in New York City, with styles nearly replicating those of Brandy Melville but at slightly higher prices.

From Brandy Melville’s and now Don’t Ask Why’s success, the implementation of the “one size fits most” policy has proven to be exceptionally successful.

Though one might think that the companies are losing profits by excluding a large amount of people from purchasing their clothing, it may be that the exclusivity of the product encourages those who can fit into the clothing to purchase it and display themselves as someone who, quite  literally, “fits in.”

“You’ll get a loyal following from those who can fit into the clothing, hence the crazy amount of Instagram followers Brandy Melville has [2.9 million],” senior Emma Sternfield said.

According to the Huffington Post, Brandy Melville’s visual manager Sairlight Saller denied that their sizing policy potentially discriminates among shoppers.

“I don’t think it causes a negative effect on the body image of any one of our shoppers because anyone can come in the store and find something,” Saller said in an interview with the Huffington Post. “At other places, certain people can’t find things at all.”

There is no doubt that Brandy Melville is one of the biggest teenage brands on the market right now, but critics stick firmly to how the store has a high potential of perpetuating poor self-esteem, distorted perceptions of weight and social exclusion, particularly for those who see the store’s sign as a “Do Not Enter” sign.

Another American retailer often in the news for controversial clothing is Urban Outfitters. This past February,  a $69 gray and white tapestry with pink triangles was put up for sale. Many found that these triangles emulated the ones Nazis used to brand gay prisoners.

Months prior in September 2014, Urban Outfitters sold a “Vintage Kent State Sweatshirt” splattered with blood spots, clearly alluding to the shootings in 1970. During the $129 dollar sweatshirt’s time on the market, it was advertised as being on an “extremely limited run” and advised consumers to “get it or regret it.”

The retailer does not steer away from the sensitive topic of body image, releasing a T-shirt with the phrase “Eat Less” written across the fabric.

“How Urban Outfitters misuses their freedom of expression makes me not like their business model,” Sternfield said. “But it is a popular store among our age group.”

Sternfield criticized the brand’s lack of a size range, which limits the diversity of its customers.

“It also bothers me how the same type of girls are inside the Brandy Melville stores — there is really no diversity when it comes to their customers,” Sternfield said. “Despite how much I disagree with the store’s practices, they will be receiving my money, and that’s what really matters to the business.”