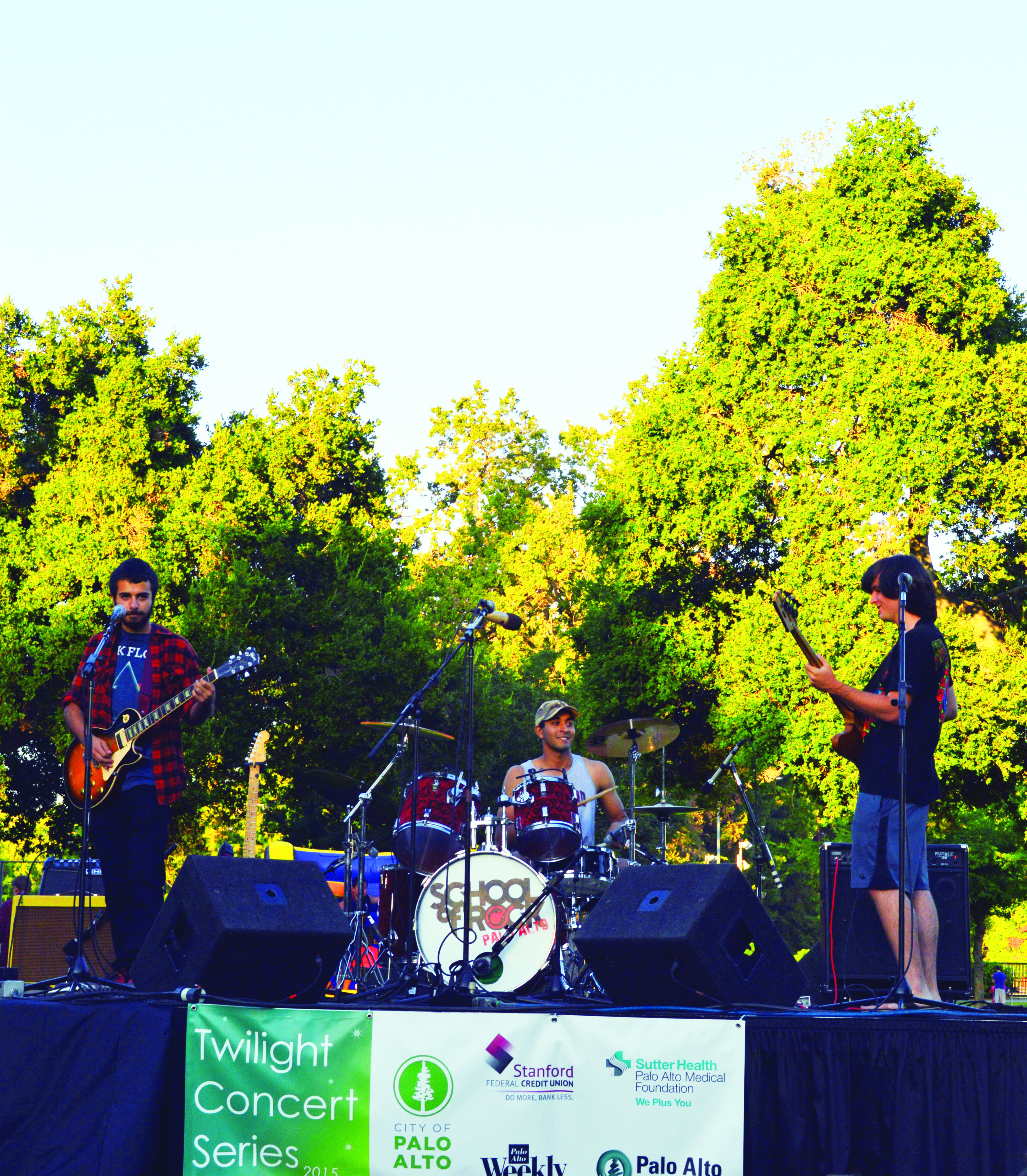 Ethan Teo
Lifestyle
April 27, 2016
It’s a Saturday afternoon, and lead singer and guitarist Russell Star-Lack, bassist Jer Samos and drummer Arjun Vasudevan are hanging out in Vasudevan’s living room. Starting out as three individuals who had developed their own passions for music separately, in only a year, the three seniors have come together and transformed into a performing classic rock band called RAJ — an acronym of each member’s first name initials.

The three musicians formed RAJ towards the end of their junior year and have played at Open Mics, the Palo Alto High School quad and various outdoor events at Mitchell Park and Rinconada Park. Their next big event is called “Buoyancy,” a concert on June 5 at Mitchell Park which was organized by RAJ in collaboration with the Teen Arts Council. The concert will feature RAJ themselves and other local teen acts, including Axiom, Pacific Drive and several other artists. Artwork will also be displayed at the venue.

“We just came up to Jer in the library once,” Star-Lack said. “I said to Arjun, ‘Hey, we should try to get Jer to play with us.’ I was kind of nervous to ask him, because I really didn’t know him.”

Star-Lack and Vasudevan had already become very comfortable playing with each other, but they took a risk by asking Samos to join the group. They had limited interactions with Samos prior to the formation of RAJ.

“I met Arjun through the band program here at Paly, so we had played together in Jazz Band for almost all throughout high school,” Star-Lack said. “But the first time Jer and I ever played together was winter of last year at an Open Mic. We had seen each other around, but we never really talked.”

Luckily, Samos was a good fit for the trio despite rarely having played with Star-Lack and Vasudevan before — their backgrounds in music meshed well together, and they were able to balance out their differences in musical approaches.

“We primarily play classic rock,” Vasudevan said. “But we have branched out with the occasional pop song.”

All three band members had substantial exposure to classic rock in their childhoods. Samos’s parents were avid fans of the Grateful Dead, and to this day, Samos credits Grateful Dead members Jerry Garcia and Phil Lesh as his biggest musical influences. He also cites Frank Zappa, Neil Young and Geezer Butler as a few of his other favorite musicians, all of whom inspired Samos to pick up the guitar.

“In eighth grade, I tried to teach myself [guitar] online just by looking at tabs, but that did not work out very well,” Samos said. “After a year, I started taking lessons, and I’ve been taking lessons from the same teacher for about three years now.”

Samos learned to play the bass guitar in the summer after his sophomore year, mainly because he found that not many of his friends played the instrument. He believes that his past experience with guitar made learning bass an easy task.

Unlike Samos, Star-Lack started playing guitar at a very young age. His parents were dedicated listeners of rock music, so he was constantly exposed to the genre. Having listened to classic rock guitarists such as Eric Clapton, Jimi Hendrix, Duane Allman and Jimmy Paige throughout his childhood, Star-Lack was inspired to learn the guitar.

“I remember exactly where I was when I heard ‘Layla’ by Eric Clapton on the radio,” Star-Lack said. “I was 6 and I was just like, ‘Whoa, what is this thing?’ I had never heard anything like it before. It just sounded insane.”

Very soon after, Star-Lack began taking guitar lessons in bluegrass and jazz. He has never had a formal guitar lesson on rock music, but finds rock relatively straightforward compared to other genres, and therefore easy to learn. Even though Star-Lack’s technical guitar background is in bluegrass and jazz and his performance experience lies primarily in rock, his favorite genre of music is the blues — a style that draws influences from both jazz and rock.

“You can get to the blues in both jazz and rock in different ways,” Star-Lack said. “In jazz, there’s more freedom if you know what you’re doing, so you’re able to improvise and experiment more, which is a key part of the blues. However, in rock, it’s easier to connect with the blues on an emotional level because the music is more direct.”

Being a drummer in Paly’s Jazz Band and a percussionist in Paly’s Symphonic Band together with Star-Lack, Vasudevan also incorporates techniques from different genres into his style of rock drumming.

Prior to learning the drums in sixth grade, Vasudevan played both the piano and the cello, but was not very skilled at the instruments and therefore did not enjoy playing them. However, Vasudevan quickly found his niche with drumming and has pursued it heavily ever since. Vasudevan has developed a style of drumming drawn from his classic rock influences that complements Samos and Star-Lack well.

“I play pretty loud and with a lot of fast fills so that’s mostly absorbed from the type of music we play,” Vasudevan said. “I’d label it as a combination of [Jimi Hendrix Experience drummer] Mitch Mitchell and [Led Zeppelin drummer] John Bonham.”

It is no surprise that RAJ started off as a Hendrix cover band. However, the group quickly began expanding their repertoire to songs by other classic rock artists like The Who and Black Sabbath. Star-Lack even wrote a few songs that RAJ has performed live.

One of RAJ’s most memorable performances was on March 15 on the Paly quad during lunch. Senior Peter Willits joined the band on stage to sing “War Pigs” by Black Sabbath in a spur-of-the-moment decision.

“We were performing on the quad and I was about to start singing War Pigs, and then we saw our friend Peter Willits watching us,” Samos said. “I knew Peter was really good at singing — he’s got a nice rock voice. So I was just like, ‘Peter, do you want to sing this really quick?’ He ran up on stage and he had a lot of fun with it.”

Impromptu performances and loose practice schedules are not the only instances that highlight RAJ’s casual approach to music. In one of RAJ’s latest performances, the three of them decided to play instruments that they were not accustomed to playing — Vasudevan played guitar, Star-Lack played bass and Samos played drums.

The band enjoyed the experiment and looks forward to rotating instruments in future performances as well. Vasudevan is beginning to invest more time and effort into learning guitar and vocals for multiple songs, including “Uptown Funk” by Mark Ronson.

“Singing and playing guitar would be nice for me because both Russell and Jer are able to play multiple instruments, which gives us more flexibility and diversity in our sound,” Vasudevan said.

With just a few more concerts left in the year, RAJ looks forward to performances loaded with energy, excitement and passion. The members of RAJ are going their separate ways for college, but their experience together will be remembered for a long time.

“I’m going to miss everyone when we go off to college,” Star-Lack said. “But maybe we’ll get to jam again in the future.”