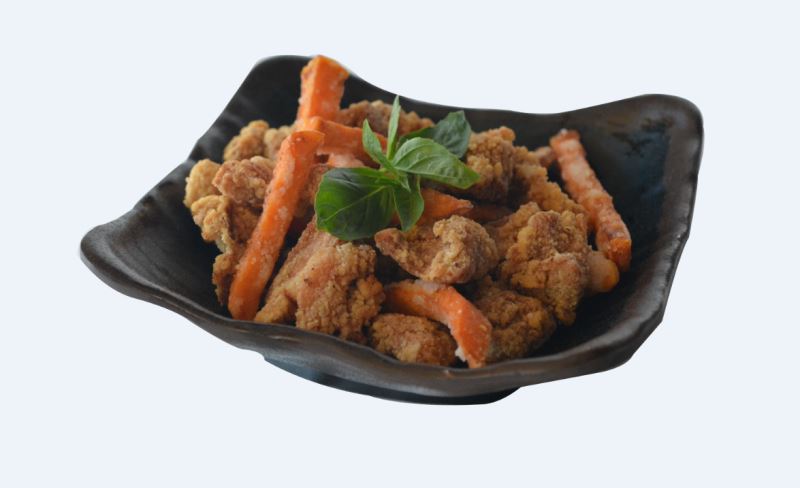 Pearl milk tea shops are already a common sight in the Bay Area — as are Taiwanese “tea bistros,” which specialize in light cuisine in addition to the popular tea-based beverage.

At first glance, Verde Tea Kitchen, one such Asian restaurant freshly opened in Mountain View in the spring of 2016, seems to be no more than yet another generic addition to an already well-established dining trend.  But could it prove its worth through an exceptional dining experience? Not quite.

Located by the crossroads of Hope and Villa Streets, and bordering the bland residential area of downtown Mountain View, Verde Tea Kitchen is one of the myriad restaurants of all sizes and genres in the bustling Castro Street network.  Parking is scarce anywhere within even the remote vicinity of the bistro, especially on Saturday nights.  Frustration had already began to seep into one’s mind before the dining even began.

The view of the facade was all but obstructed by a crude web of metal scaffolding.  So much so, one could hardly make out the signboard from across the street.

Sure, it wasn’t the restaurant management’s fault that the building required renovation.  But it did have a detrimental effect, however blamelessly, on first impressions.  What could have potentially set the mood visually for the upcoming dine ended up somewhat smudging it.

Stepping through glass-panel double doors into a spacious waiting area, one is greeted immediately by a beverage counter not unlike that of a pearl milk tea shop, complete with dangling glasses and a row of overhead menu panels.  The bistro was situated directly behind.

A waist-high sign by the door read: “Please Wait To Be Seated.”  But as no waiters seemed to be available, customers would wait a bit, figure better, then promptly proceed to seat themselves.  It would have been irksome if the sight wasn’t so humorously ironic.

While the service was initially absent, one should not, by any means, disregard the soothing interior decor.  There was an intentional naturalistic appeal, with many shades of green — from the mahogany-colored ceiling and walls to the bamboo-textured floorboards, tabletops, and cabinets, to the tea-green posters and, well, glasses of tea.

The relaxing atmosphere is accented with lively Mandopop, dampened lighting from acrylic stick lamps, and the faint, steady trickling from the cascading fountain laid against the back wall opposite the main entrance, in accordance, undoubtedly, with Chinese feng-shui.

The one thing that subtracted from the homey ambiance was the awkward spaciousness — of the 40 available tables, only a quarter were occupied.  No one sat at adjacent tables.

The very fact that the restaurant was not packed to the brim at 7:30 p.m. on a Saturday night, as most other decent restaurants nearby were, was an ominous sign.  Which begs the question, is there something wrong with the food?

Menus are delivered promptly enough, almost right after seating.   On the flimsy plastic plaque was a fair range of food choices, albeit printed in sans serif font, half the size of random newspaper articles.

The centerpiece of the selection was obviously rice plate sets (which comes with a drink), but some alternatives, such as noodle soup, teppanyaki and fillets are also available.

Exactly one half of the menu was dedicated to the incredible array of tea-based beverages and desserts.  Unfortunately, those who prefer alcoholic drinks are not in luck.

The waiters, with their uniformed black collared shirts and aprons, were professional, though they only seemed to frequent the tables when hollered at.  Which was weird.  The waiter-to-customer ratio was so high, one would expect them to drop by a little more frequently.

Much like the cascading fountain on the back wall, the food arrived in a lazy trickle

Fourteen minutes after the order was placed, the beverages arrived.

The complementary milk green teas, first to arrive, were a mild shock, with an over-administered dose of syrup and unsaturated powdered milk, the residue of which clung stubbornly to the roof of the mouth.  Yet something about the grainy texture of the otherwise plain wheat germ milk tea ($3.20) made it exceptionally refreshing for the throat.

Seventeen minutes after that, when the drinks were long exhausted, the first actual dish was finally served.

Speaking of salty fried chicken rice ($8.49), it was not excessively salty.  It was a faultless adjustment though: the dish was derived from popcorn chicken, a typical Taiwanese snack typically consumed in much smaller portions.

The dish was a letdown though.  The rice, slightly undercooked, was sprinkled with dull brown meat sauce that looked — and tasted — flaky.  Even the diced chicken consisted of visually lackluster and flavorless chunks.

Most horrifically, the lack of basil, almost always applied to popcorn chicken, was a defect that practically guaranteed a bland taste.

Aside from the small chunk of oily tofu and boiled egg by the side of the plate, everything else helped to induce a parched throat.  And it was the kind of dryness that couldn’t be washed down by a beverage.

The rice plate set included no vegetables, yet another shortcoming that did not help the case.  Neither did the fact that virtually everything — including the complimentary cold dishes — was sprinkled with a large of MSG.

The bland impression and parched flavor of meat extended to the grilled chicken breast teppanyaki ($10.99) and the pork chop rice ($8.49), rendering the final and most important piece of the dining experience ungratifying.

Yet taking into account the otherwise passable flavoring and appropriate serving size, the overall meal can best be framed as one of average quality.

In its brief six months of existence, Verde Tea Kitchen is already expanding, having opened a subsidiary in Fremont and planning to break ground in Cupertino by this December.  But, with all due respect, for the fledgeling restaurant’s purpose and welfare, quality and not quantity is the way to go.