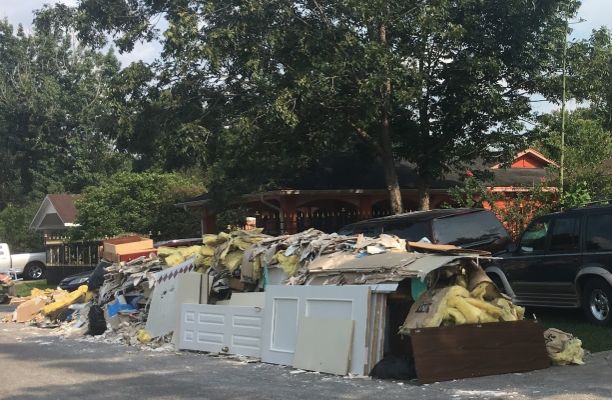 The aftermath of Hurricane Harvey

On the evening of Aug. 25, Hurricane Harvey became the first hurricane to make landfall in the United States since 2005. For most people watching from the Bay Area, Harvey was a sad but distant natural disaster almost 2,000 miles away that made the rounds on all the major news channels for a week.

However, for the Flores family, residing in Houston, the destruction and disaster Harvey left in late August will not be forgotten.

“The hurricane is just the beginning; the worst part is what comes after,” said Yesenia Flores, a law student in the Bay Area, in an email.

A breakdown of basic infrastructure, the rule of law and the social fabric of a community usually accompany natural disasters.

Hurricane Katrina in 2005 demonstrated that the rescue and support work that come in the aftermath of a natural event are more critical to the well being of our population than mitigating the actual physical damage caused by Mother Nature. For many victims of Hurricane Harvey, however, the help hasn’t come yet.

Although the government, through the FEMA [Federal Emergency Management Agency], has gotten better at helping after a natural disaster, it still takes a lot of time and resources to rebuild infrastructure and repair whole communities. During this time, victims struggle with basic life necessities.

“It’s incredibly humbling to need to ask others for help, even simple things like water, soap, or a clean shirt,” Flores said.

Flores is currently studying law in the Bay Area, but has monitored her family’s situation closely. The destruction caused by Harvey has taken an emotional toll on her.

“I started law school the week Hurricane Harvey hit Houston, so it has been incredibly stressful,” Flores said. “The day of the hurricane was probably the worst. It was almost impossible to pay attention in class while I worried about whether my family was safe. It didn’t help that family and friends had turned off their phones to save battery during the hurricane. When my phone calls went to voicemail it was hard to imagine anything other than the worst.”

Being separated from her family has been tough on Flores, and has led to conflicted feelings and a pressing urge to help.

“I know there is so much I could help with if only I was there in Houston. I’ve tried to help as much as I could from afar, including getting them hotels, finding them places to stay, calling the insurance companies and aid groups, among other things.”

There have been significant efforts by individuals and organizations to raise money, but Flores said this money has yet to reach many Houston families.

“We live in an area that is primarily lower income and minority families,” Flores said. “A lot of my little sister’s friends from wealthier neighborhoods have come to help us and noticed obvious discrimination in aid distribution. My mom has been turned down twice when she has lined up to receive water. Our neighborhood is yet to receive aid and few are willing to volunteer to help. Red Cross and FEMA did come one time to give out food, but the produce was all moldy and expired. When my mom and my sister went to a shelter nearby to try to get a change of clothes, all they had were rags.We realize that beggars shouldn’t be choosers, but I feel like human dignity should still be respected.”

The lack of aid has directly culminated in health issues, contamination and other problems.

Despite their suffering, the struggles these families are facing have flown under the radar, largely in part to news cycles moving on from Houston.

While mainstream publications explore more recent events, Houston residents are suffering, with no end in sight.

The prospect of helping Houston residents likely seems daunting for Californians; however, Flores said that methods are available for California residents to deliver much needed and appreciated aid.

Being almost 2,000 miles away from the havoc, Californians likely can’t sympathize with the harsh road to recovery but should not underestimate the difference almost anyone interested in helping can make from afar.

“I think reaching out to local organizations and GoFundMe pages for individual families would be the most effective.”

The Flores family has a GoFundMe page for relief funds, and has raised $9,893 of their $40,000 goal. The money is needed for basic human necessities, including housing, cleaning supplies, clothes, food and medical bills. The urgent need for funds is a common predicament of families like the Flores family.

Although individuals like J.J Watt, a football player for the Houston Texans, have raised large sums of money, Flores believes more can and should be done.

While I’m grateful individuals like J.J. Watt have done so much to fundraise, it’s still unclear how this will be spread to the community and how families like mine can get assistance for immediate needs,” Flores said.

The devastating material destruction left by Harvey is just one component of the many harms caused by Harvey. The emotional void left in Harvey’s wake has also severely affected the Flores’ family.

“To see all of your childhood memories and photographs covered in mold and soaking with water is impossible to describe,” Flores said. “We have no more pictures of our grandparents or our parent’s wedding. My mom still calls me in tears almost daily because of the memories that were lost.”

As the news cycle rolls on, Houston communities are suffering, waiting for help that is long overdue.

“Our community has been completely abandoned,” Flores said. “The nicer parts of town are recovering well with the help of volunteers, but we are doing the best we can. I know neighbors who are living in their flooded homes because there is no room for them at shelters and they can’t afford hotels.  I think what makes this recovery so much harder is hoping for help that still hasn’t arrived.”