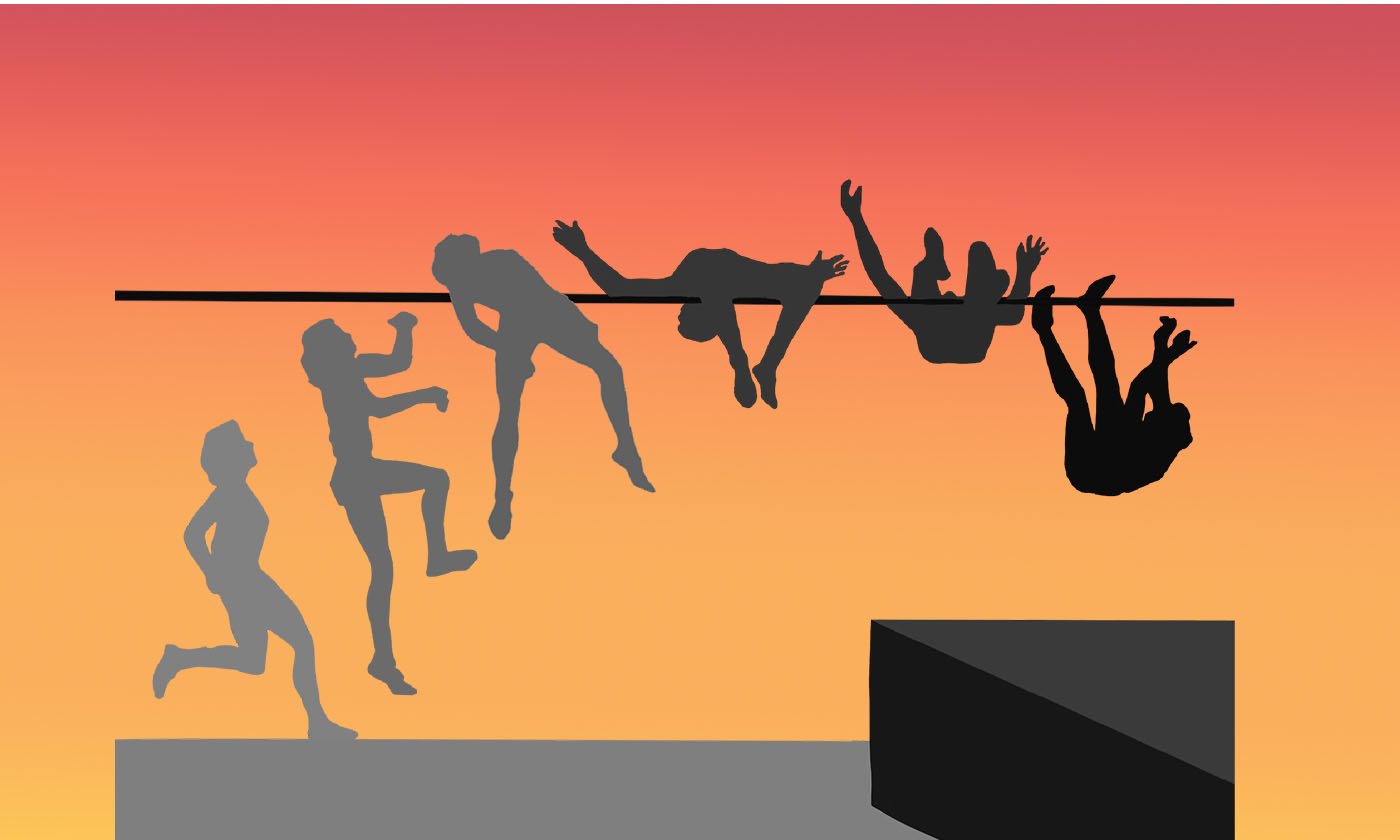 As former Paly student Eden Hagen prepares for her run up to the bar, she mentally prepares herself to take on the highest jump she has yet to successfully complete.

Hagen is trying to pass her personal record and jump over a bar 5 feet high.

Hagen competes in high jump, a track and field event in which the goal is to jump over a horizontal bar that increases in height each round.

In competition, the bar starts at a relatively low height that everyone is supposed to be able to clear, such as 4 feet.

According to Hagen, the competitor can join at whatever height they feel comfortable at, which is usually an easier height for the person.

“You determine what height you start at,” Hagen said. “Usually jumpers will start 4 to 6 inches below their personal record, as sort of a warm up for higher heights.”

Hagen said it is important for a jumper to start  at a low height and gradually reach the higher heights so their body has a chance to warm up.

“Because you can join at whatever height you feel comfortable, there’s always the risk that you won’t pass a height at all, especially if you come in at a height that is challenging to your ability,” Hagen said.

Participants in high jump competitions have three tries to get over the bar. If they don’t make it, they are eliminated from the competition.

According to Hagen, the competition continues until no one is able to jump over the bar and the jumper who can clear the tallest height is crowned the winner.

“Though you do technically place in high jump, it is really a competition against yourself more than against the opponent, as you are jumping to surpass your personal record,” Hagen said. “That’s the thing I like most about track and field: in the end, you’re really your own opponent.”

According to sophomore Natalia Cossio who has been high jumping since eighth grade, one of the hardest parts about high jump is its mental aspect.

“I think high jump is hard because there are a lot of mental hurdles,” Cossio said. “At each new height, when the bar is raised, you have to imagine yourself going over the bar without thinking about the daunting new height.”

Junior and high jumper Ras Kebebew said he is able to remain focused by being mentally strong.

“In order to be a good high jumper you must be explosive, balanced and have mental toughness,” Kebebew said. “(You need) mental toughness since it is a sport where you are in control of what you are capable of. If you miss a jump, you have to believe you can still make it.”

One way junior and high jumper Aaron Kim said he keeps mentally strong is through  individual goals and targets that he aims to reach throughout the season.

“It’s really easy to get in your own head, so setting goals for yourself and staying focused is crucial,” Kim said.

However, along with being mentally strong, athletes must also have the physical traits and abilities to be a successful high jumper, according to Cossio.

“High jumpers tend to be pretty tall and skinny, which I am not, but that aside it’s important to have strong legs and a solid core to get yourself up and over the bar,” Cossio said.

Often, one of the most overlooked parts of the sport is the run up to the bar, according to Kim.

But according to Paly’s high jump coach Chamique Francis, who has been working with Paly for six months, the run-up can be one of the most crucial parts of finding success in this event.

“The quality of an approach is just as important as the jump itself,” Francis said. “It requires consistency, counted steps and confidence. Our high jump crew spends a lot of time on approaches.”

Every high jumper has a different approach to the bar, which requires lots of technique and practice.

“I have a nine-step run-up to the bar before I jump, but I’ve seen people with as few (steps) as four and as high as 14,” Hagen said. “The side from which you start your run-up is also important, as that determines which foot you jump off on, which can greatly affect your height.”

After the run-up is when the jump takes place, and what many high jumpers try to improve the most on.

For example, Kim reached his personal record of 5 feet 6 inches during his sophomore year. This year, he is striving to jump 4 inches higher, which would put him at 5 feet 11 inches.

However, Kim said this cannot be done without a significant amount of practice and hard work everyday.

“We only jump around two times per week, so we spend most of our time at practice building strength and stability,” Kim said. “The work we have to put in on the track can be pretty tough.”

Francis explains how each day of practice focuses on something different, not solely jumping.

“Each practice includes a warm-up, drills, hip mobility exercises and abdominal exercises,” Francis said. “Our workout schedule is as follows: Mondays are our interval training days, Wednesdays and Fridays are typically our jump intensive days which includes high jumping and/or plyometrics, and Tuesdays and Thursdays are our rest and light activity days.”

While track and field is a popular sport as a whole, high jump tends to be an event that many athletes stray away from, Kebebew said.

This may be because many athletes fear they would not be skilled enough to do well in the event, according to Kebebew.

“People have to start with a decent amount of bounce or vertical to do a good job,” Kebebew said. “People only want to do something they are good at.”

Additionally, Kim said there may not be enough publicity around the event due to the hit-or -miss nature.

“We don’t get much recognition at all,” Kim said. “Usually, the sprinters get the most attention due to the fast-paced and exciting nature of the event. High jump can be somewhat of a drag depending on the skill of the athletes. If most of the competitors aren’t jumping very high or not clearing the bar, it’s not that fun to watch. In other words, I guess high jump can be inconsistent. Sometimes it can be really exciting, but other times it can be kind of boring to watch.”

Despite this, the members of the high jump team truly love the sport and all the support that comes with it.

“One of the best parts of high jump isn’t the exhilaration of clearing a new height,” Hagen said. “It is the feeling of community among teammates that really makes the event worthwhile.”