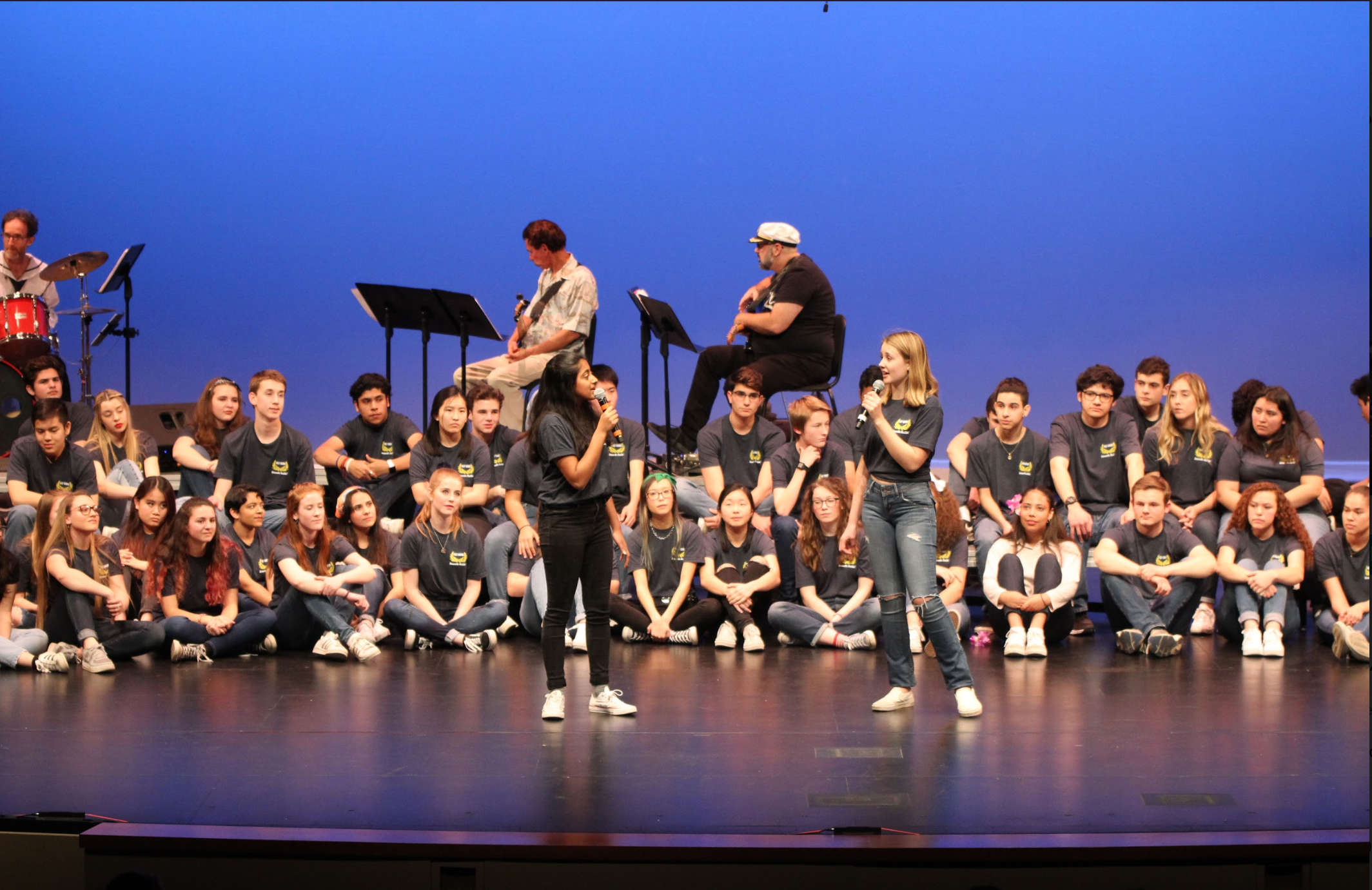 In front of the majestic backdrops and high tech sound features of the Performing Arts Center, the Paly choirs sang a wide variety of songs from the ‘70s and ‘80s yacht rock style of the smooth rock music genre in its annual Pops Concert on the evenings of Feb. 6 and 7. Featuring songs from the Paly choirs: Concert, Spectrum, Premier, and Madrigal, as well as soloists and groups, the concert demonstrated the diversity of the music genre through its selections.

The theme of this year’s Pops Concert was “Smooth Sailin’,” a play off of the genre unknown to many, yacht rock.

“It’s really great music from the ‘70s and ‘80s,” Director Michael Najar said. “It’s got a lot of harmonies, (and) it makes for perfect singing.”

Director Brittney Kerby said they chose the theme in order to expose students to different eras of music, offer them an opportunity to get out of their comfort zone and feel confident performing on stage.

One of a performer’s biggest challenges to doing well on stage is often getting over the sensation of feeling nervous before a concert.

“I would say my biggest challenge was stage fright, but once I started singing, it kind of went away, and I could get into the music more,” senior Georgia Cowie said.

Sophomore Rohini Bharat also had a similar experience when she performed as both part of the Spectrum Choir and with Cate Dyer in the duet “Lost in Love” written by Graham Russell and performed by Air Supply. Bharat said that although she was nervous before getting on the stage, as soon as she started singing, the concert became fun.

“I think that one of the best parts of the concert was that since we had already spent weeks practicing and learning the dance moves, the performance was just for us to let go and have fun,” Bharat said.

The concert gave students such as senior Tyler Furrier a fun, unique opportunity to perform and express themselves and listen to others as well.

“I think some of the solos blew it out of the water, and that’s probably the most memorable part (of the concert),” Furrier said.

Furrier performed multiple times: as a soloist, as part of the Heartbreakers a capella group and as part of the choir. He said the best parts about performing are the music, the crowd and the people he performs with.

“It’s really gratifying when the crowd really embraces you,” Furrier said. “And performing good music makes it that much nicer to perform.”

One aspect of yacht rock Furrier said he enjoys are the harmonies. When the Heartbreakers were looking through yacht rock songs, they stopped at “Brandy (You’re a Fine Girl)” written by Elliot Lurie and performed by Looking Glass because it already included vocals and sounded great harmonically in four voices.

In addition to the solo and a capella performances, the choirs all had their unique moments. One such moment came from the freshmen Premier Choir, when it sang “Come Sail Away” written by Dennis DeYoung and performed by Styx. A nod to the theme of the concert, the Premier Choir pulled out chair-sized “sailboats” and glided across the stage to the surprise and applause of the audience.

Those watching, including Bharat and Najar, described the Premier Choir’s performance as “fun” and “awesome.”

For both Najar and Kerby, one of the best parts of the concert was watching the improvement that all students made throughout the year.

“Just watching them hone their craft and go onstage and give it their all is one of the most rewarding parts of being a teacher,” Kerby said.

For Kerby, seeing the joy that the concert brings to the students and the audience is the best part about the annual Pops Concert.

Kerby said, “There’s nothing better than making people’s hearts feel light for however long we can.”