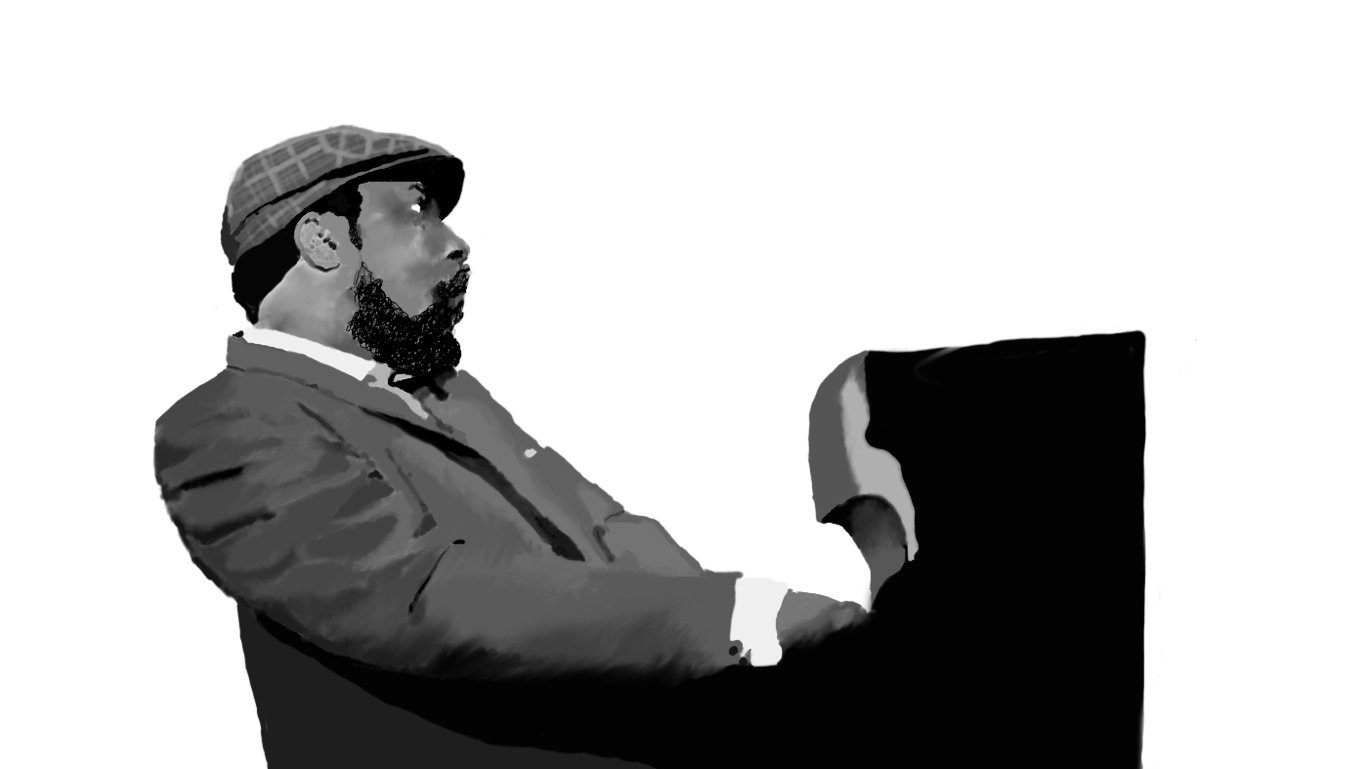 Thelonious Monk at Paly: A story of unexpected unity

It’s pouring rain outside the Haymarket Theater, and Danny Scher is brimming with anticipation. He stands alongside countless other jazz aficionados as he waits anxiously for his performers to show up.

Finally, with the neck of an upright bass sticking out of the window of his older brother’s van, Thelonious Monk and his ensemble pull up to the theater. The show starts, and after 46 minutes of passionate and entrancing jazz, the crowd erupts with applause.

Monk interrupts the cheers and apologizes for the end of the concert saying, “We got to hurry back to get to work, you dig?”

Monk, a jazz pianist known for his innovative playing style, performed on a whim at Paly in 1968. The concert, which was released on September 18 by Impulse! Records as a live record of Monk’s entitled “Palo Alto,” was organized solely by then-16-year-old Scher.

Scher, looking for an opportunity to hold a fundraiser for the International club, called Monk’s manager at the Jazz Workshop in San Francisco, where Monk was performing. They agreed to hold a concert at Paly for $500.

Unbeknownst to Scher, Monk needed the money. He was deeply in debt with his label, Columbia Records, and wasn’t attracting the younger fans that his label hoped he would. $500 for a performance less than an hour long was not only appealing to Monk, it was necessary. His family’s well-being depended on it.

Scher went to work on publicizing the concert — a talent that would later turn into his career. He put posters everywhere, including in then-unincorporated and predominantly Black East Palo Alto. Despite local police officers discouraging a white kid from advertising in the area, he continued, focused on making sure the show would be a success.

“I’ve got to sell tickets, and if you think I’m in trouble by being here, I’ll be in even more trouble if the show doesn’t do well,” Scher recalled telling the officers.

It wasn’t obvious that there would even be a show. Plenty of skeptics within the community doubted whether a revered artist like Monk would even show up to the concert.

In the liner notes for the vinyl release of the concert, Scher recalls the word on the street being, “So Monk is coming to lily-white Palo Alto? We’ll believe it when we see it.”

But when Monk and his ensemble pulled up to the Haymarket Theater, the same skeptics flocked to Paly to buy tickets at $2 a person or $1.50 for students. The show was on.

“The concert was successful,” Scher said. “There was not one negative vibe the whole time.”

The two main high schools in Palo Alto and East Palo Alto represented the divide between the neighboring communities well. In 1970, 64% of the students at East Palo Alto’s Ravenswood High School were Black, whereas Paly was almost entirely white. Paly alumnus and Ph.D. Greg Florant attended the concert and was one of eight Black students in the class of 1969.

“The thing that struck me about the concert was that it was a great Black jazz musician coming to play at what was basically an all-white high school,” Florant said. “So, I can say that I was surprised and encouraged by the fact that Danny had reached out to folks all over Palo Alto, as well as East Palo Alto to have them come to the concert. So in effect, he was trying to bring different people together.”

The concert also came during a time of civil unrest in East Palo Alto. Just months after the assassination of Martin Luther King Jr., the community was advocating for renaming the area Nairobi, after the Kenyan capital, due to the population being predominantly Black. There were, and still are, distinct social, economic and racial divides between East Palo Alto and white, affluent Palo Alto.

“It doesn’t surprise me that Palo Alto hasn’t changed as much as I hoped it would,” Florant said.

Palo Alto is still a place of indirect segregation. East Palo Alto has more than eight times the percent of Black residents than Palo Alto Historian Steve Steiger believes that this is a statistic that can be attributed to the way many developers delegated the rules of who could live in a residence. In many Palo Alto neighborhoods, title deeds forbid Blacks from living in the house.

“Many developers didn’t want Blacks to buy houses in Palo Alto, even when they had the money,” Steiger said. “So if you had a young, black engineer at HP, he would be told, ‘Here’s where you need to buy a house,’ and would be sent to East Palo Alto.”

These racist deed restrictions were ruled unconstitutional by the U.S. Supreme Court in 1948, but the clauses in the title deeds remain unaltered. And even after the implementation of the Tinsley Voluntary Transfer program, which allows students from the East Palo Alto District to transfer to PAUSD via a lottery system, Black students at Paly are still an overwhelming minority, making up only 2% of the student body.

Despite the inequities that remain after Monk’s concert, the event was one of unity between the two communities.

“It was white, Black, young, old, high school, grandparents and parents at the end,” Scher said in an interview with The New York Times. “To me, this was like pressing pause. It was like a time out. Let’s just all get along. Let’s just hear some great music for a day.”