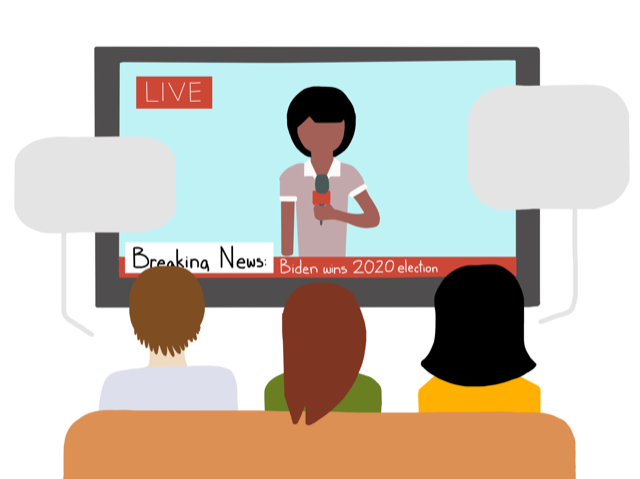 When Joe Biden was announced as the U.S. president-elect, senior Rachel Owens felt reassured. It marked the end of five consecutive days of nerve-wracking anticipation and president Donald Trump’s tumultuous four-year term, which had given her a constant sense of uneasiness.

“I think I’m just really relieved,” Owens said. “I think that like a lot of people had been anxious for a very long time about what was happening in the state of the country and the state of the world.”

After five days of continuously refreshing the election results tab, sophomore Kyle Park said that he felt the same way. Park said he found the motivation to escape the confines of his bed only when his parents informed him of the results of the election.

“I guess that really expresses how happy I was,” Park said. “We have a president whose next four years are not going to be a complete disaster. I hope.”

When junior Anton Tompert woke up Saturday morning to the election results, he said he regarded them with both surprise and indifference.

“I was kind of surprised –– I totally thought Trump was gonna win,” Tompert said. “At first, it did not look like Joe Biden had a chance. I’m not upset or anything, but I think if the Senate is Republican, then crazy stuff isn’t going to be passed.”

As someone whose mother supports Biden and whose father supports Trump, Tompert said he falls somewhat in between his parents on the political spectrum, aligning most similarly with the views of Liberatarian candidate Jo Jorgenson.

“I think she has the most policies that I line up with,” Tompert said. “I think the presidential candidates for the Republican Party and the Democratic Party are too extreme at the moment.”

History teacher Katya Villalobos was pouring herself a morning coffee when her mother alerted her of the results on CNN. During the last week, Villalobos said she and her mother were addicted to CNN and almost everything about the election.

“It was kind of exciting to see it live. And then watching so many Americans start to celebrate, it was like one big block party,” Villalobos said. “Especially in the cities, people were dancing and hugging each other, not great for COVID-19, but it was nice to see America celebrating for a day.”

The New York Times has called every state in the presidential election, with Biden winning vital swing states such as Pennsylvania, Georgia and Michigan. Biden currently holds a seven million vote lead in the popular vote as well, with 81 million votes to Trump’s 74 million. Villalobos said the voter turnout was unprecedented.

“The biggest news about the election right now is that 150 million Americans voted, and we are still counting,” Villalobos said. “That is astonishing. We have never seen a turnout like this. And I think that does tell you to the importance of the election.”

Nonetheless, some think that Biden’s margin of victory was too little for comfort. Senior Antonia Mou said while she is happy with the results of the election, she is disappointed with the large number of votes Trump received.

“The Palo Alto bubble is not really representative of the entire U.S., and 60, 70 million people still voted for Trump even after his four years,” Mou said. “That was very disheartening for me.”

Come Jan. 20, Biden will be sworn into office in the midst of both a health and economic crisis in the wake of the COVID-19 pandemic. Owens said she thinks many of the deaths from the pandemic are a result of Trump’s disregard for medical experts.

Tompert said the pandemic was clearly the worst part of Trump’s presidency.

“I think (in) the first three years, everyone was overreacting,” Tompert said. “And then this (past) year, everything was really poorly dealt with.”

Owens said Biden’s candidacy marks a change in the country for the better, both in terms of the COVID-19 predicament and as a president.

“To have a president in office who is going to try and represent the views of everyone who voted for him, try and bring this country together, listen to scientists, advisers and experts on issues and not make rash decisions based on what he’s feeling like that day –– that is really great,” Owens said.

But Tompert said the importance of the 2020 presidential election has been overstated.

“It gives hope to a lot of young girls and women in general to see themselves in such a high position,” Owens said. “I really hope that like she said in her speech, she’s the first but she better not be the last.”

Villalobos said she admires Harris’ decision to wear white for her victory speech.

“It’s the 100th anniversary of the 19th amendment this year,” Villalobos said. “She wore white on her when she spoke that night of when the election was called for Biden. White is the color of women’s coats in the suffrage movement. I thought that it was amazing to pay homage to the women that came before her.”

Villalobos said Harris as vice president is a significant event in America’s history. She said that having a woman of color in office could change future expectations for the position.

“It’s important for young women and men across this nation to see that a woman has attained that level of political office,” Villalobos said. “Not just as a woman, but a Black woman, and a woman of Indian descent, which is for our first time in history.”