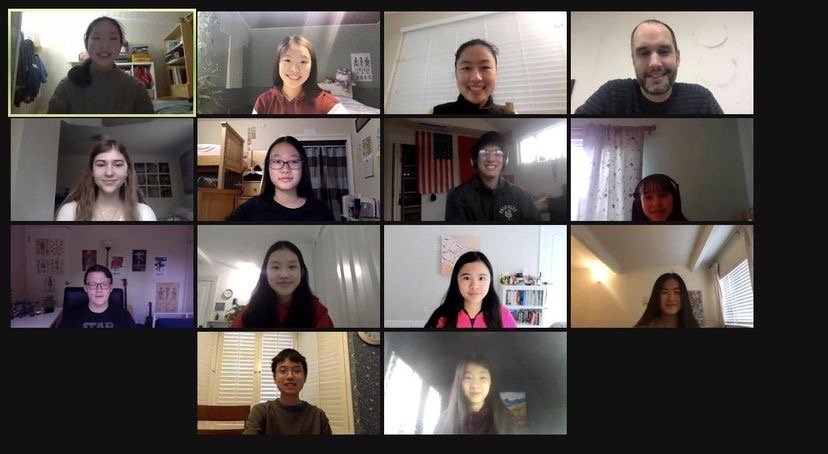 The science of thinking

In order to educate students about the brain and how it functions, junior Cynthia Zhang and sophomore Isabella Pei started the neuroscience club. In January of 2020, and in August of 2020 the club elected junior Madison Abbassi and sophomore Sophie Gu as vice presidents.

“We started it because we all were interested in neuroscience, and we thought we might as well just start a club for it, and hopefully see if any other students had the same interests and form a community there,” Abbassi said.

Pei and Zhang both began to work on the club as a way of understanding humans, particularly in matters of behavior.

“I’ve just always been questioning human behavior, so I’m interested in both neuroscience and psychology,” Pei said. “I thought it would be nice to learn the actual science behind how we think, so that’s why I thought of starting the neuroscience club with Cynthia.”

In September of 2020, the club posted to its Instagram account for the first time, welcoming anyone with even a passing interest in how the brain works to join them Friday at lunch. But the club actually began nearly a year prior.

Pei said many of the club members joined because of their interest in psychology and human behavior, but anyone who is interested in neuroscience is welcome.

The first meeting happened in person, but the club had to adapt to virtual meetings, like all other Paly clubs, last March.

“Our first, and only, in-person meeting, we were actually able to get Boba, and we were kind of doing like a Jeopardy-style thing and giving Boba to the winners.” Abbassi said. “And obviously with the virtual, you can’t really give out any prizes. So we shifted to almost more of like a lecture-style meeting where we would all like to research a topic and present some slides on it and then do like a little quiz over Zoom.”

Pei and Zhang lead club meetings, which often include presentations, videos, games and special guest speakers. Along with their vice presidents, they research topics such as neurosurgery and brain structure — enough so that they’re able to convey their knowledge effectively to members.

And while the club’s Instagram, brain-related memes have garnered 180 followers and helps followers grasp a more full understanding of blood barriers, the club’s lessons teach a lot more than someone learns from scrolling through the memes on its feed.

“In the past we’ve done or we’re planning to do the neurochemistry of emotion. We have also talked about mental illness,” Abbassi said. “But we have also done more hard scientific stuff like neuroanatomy, because there’s some cool online 3D interactives. And I guess that’s something cool about virtual is you can just pull up a 3D thing and screen share, and then you’re able to rotate it in real time.”

However, not all neuroscience can be taught through student knowledge. Zhang said sometimes the best way to learn about the neuroscience field is to listen to those who have firsthand experience.

“We were fortunate enough to have Dr. Linda Wei Xu, a female neurosurgeon who has trained at Stanford, speak with us about her experience studying neuroscience and what being a neurosurgeon looks like,” Zhang said. “Before the meeting, we sent out a form to our club members to see what questions and topics they wanted to learn about from our guest speaker, and using that form, Dr. Xu curated a presentation that basically described her experience.”

Xu’s cameo was not only informative for the club, but also inspiring for its members.

“And I think it was so cool just to have her,” Abbassi said. “She was a real role model, and she made neurosurgery seem very accessible because I know a lot of the people think: ‘Oh, brain surgery is this big daunting thing. Like only super crazy people would devote the time to that.’ But, I think honestly, having a good mentor, a good role model and having that exposure might encourage more people to consider careers or pathways that they would never look up before.”.

Despite welcoming professionals, the club is also a space for those who know nothing about neuroscience, and want to learn.

Whether or not you’ve taken a course on the topic, are interested in a cross section of neuroscience with another topic or just want to learn more about the brain, stop by P-11 (or their Zoom meetings, for the time being.)

“(We’re) just generally (open to) people who are curious about the brain and how it works,” Pei said. “And it’s a very beginner friendly club.”