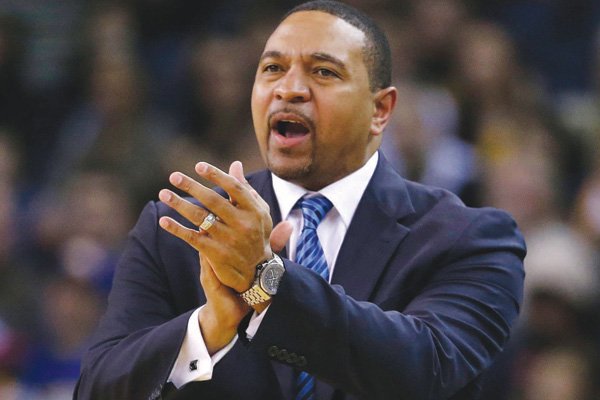 Mark Jackson, above, was let go from his position as the head coach of the Warriors a year earlier than his contract outlined.

The Golden State Warriors parted ways with former coach Mark Jackson following a first round loss to the Los Angeles Clippers in the playoffs.

Jackson compiled a 121-109 record over three seasons, but a rocky relationship with team ownership contributed to his firing.

After a 4-3 loss in the series to the L.A. Clippers, Golden State Warriors owner Joe Lacob decided that, for the benefit of the club, it would be a wiser decision to let go of Coach Mark Jackson a year earlier than his contract presumed.

“Maybe rookie-coach-to-be Steve Kerr can be the savior, perhaps bypassing his opportunity to take over the New York Knicks in order to take this talented team to the next level,” Sam Amick, writer for U.S.A. Today Sports, said.

According to Turner Network Television’s (TNT) David Aldrige, Steve Kerr has recently accepted a $25 million offer to become the next head coach of the Golden State Warriors, commiting to a five-year contract.

Kerr was considered to be the frontrunner for the Knicks’ head coaching vacancy after new President of Basketball Operations Phil Jackson made it clear his former guard was the franchise’s top choice for the job.

Golden State’s move to hire Kerr came a day after another candidate for the job, Stan Van Gundy, accepted an offer from the Detroit Pistons.

Kerr has no head coaching experience, but has been involved in the NBA since his 15-year playing career ended. He is currently serving as a color commentator for TNT, as he has done on-and-off since he retired from his playing career at 37.

Kerr has front office experience, having served as General Manager of the Phoenix Suns from 2007 to 2010. He was also behind the trading of Shawn Marion to the Miami Heat for Shaquille O’Neal in 2008.

Bob Myers, general manager of the Golden State Warriors, released a statement covering the hire of the new head coach.

“We’re very pleased to introduce Steve Kerr as our new head coach,” Myers said. “We are confident that he will be an extremely good fit for our team and our organization as we venture into the future. The fact that he played for several of the greatest coaches in the history of the game — including Phil Jackson and Gregg Popovich — will serve him well, as will the many nuances that he learned from performing on the brightest stage during his incredibly successful, championship-filled career.”

Steve Kerr expressed his excitement after being signed to the Golden State Warriors.

“I’m really excited about the unique opportunity to coach a very talented team and work for this committed management group,” Kerr said. “In my estimation, the Warriors, from top to bottom, have become one of the marquee organizations in the NBA in recent years. I’m looking forward to becoming part of that environment and building upon the success of the last two seasons.”