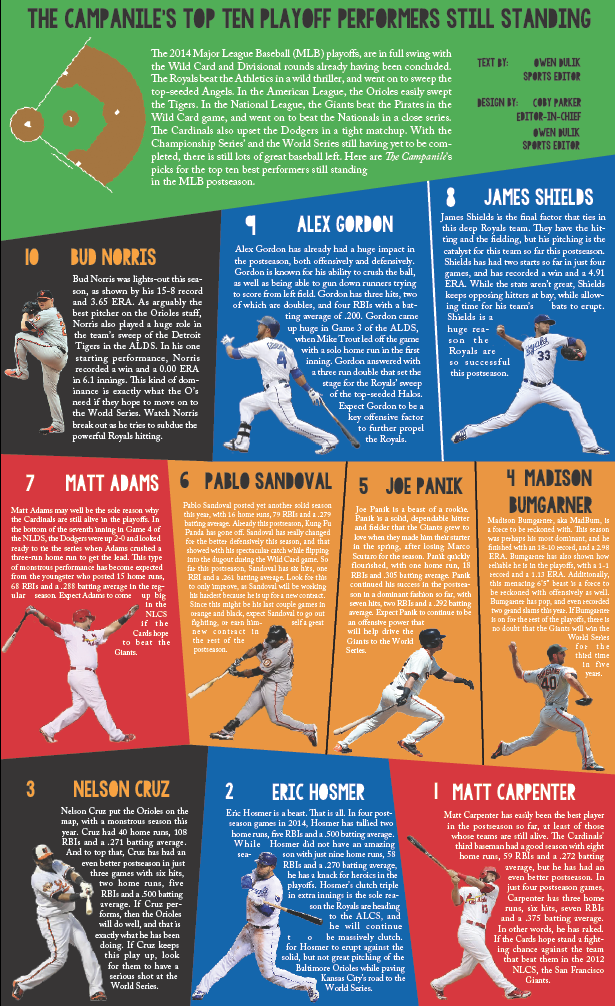 The 2014 Major League Baseball (MLB) playoffs, are in full swing with the Wild Card and Divisional rounds already having been concluded. The Royals beat the Athletics in a wild thriller, and went on to sweep the top-seeded Angels. In the American League, the Orioles easily swept the Tigers. In the National League, the Giants beat the Pirates in the Wild Card game, and went on to beat the Nationals in a close series. The Cardinals also upset the Dodgers in a tight matchup. With the Championship Series’ and the World Series still having yet to be completed, there is still lots of great baseball left. Here are The Campanile’s picks for the top ten best performers still standing in the MLB postseason.

Bud Norris was lights-out this season, as shown by his 15-8 record and 3.65 ERA. As arguably the best pitcher on the Orioles staff, Norris also played a huge role in the team’s sweep of the Detroit Tigers in the ALDS. In his one starting performance, Norris recorded a win and a 0.00 ERA in 6.1 innings. This kind of dominance is exactly what the O’s need if they hope to move on to the World Series. Watch Norris break out as he tries to subdue the powerful Royals hitting.

Alex Gordon has already had a huge impact in the postseason, both offensively and defensively. Gordon is known for his ability to crush the ball, as well as being able to gun down runners trying to score from left field. Gordon has three hits, two of which are doubles, and four RBIs with a batting average of .200. Gordon came up huge in Game 3 of the ALDS, when Mike Trout led off the game with a solo home run in the first inning. Gordon answered with a three run double that set the stage for the Royals’ sweep of the top-seeded Halos. Expect Gordon to be a key offensive factor to further propel the Royals.

James Shields is the final factor that ties in this deep Royals team. They have the hitting and the fielding, but his pitching is the catalyst for this team so far this postseason. Shields has had two starts so far in just four games, and has recorded a win and a 4.91 ERA. While the stats aren’t great, Shields keeps opposing hitters at bay, while allowing time for his team’s bats to erupt. Shields is a huge reason the Royals are so successful this postseason.

Matt Adams may well be the sole reason why the Cardinals are still alive in the playoffs. In the bottom of the seventh inning in Game 4 of the NLDS, the Dodgers were up 2-0 and looked ready to tie the series when Adams crushed a three-run home run to get the lead. This type of monstrous performance has become expected from the youngster who posted 15 home runs, 68 RBIs and a .288 batting average in the regular season. Expect Adams to come up big in the NLCS if the Cards hope to beat the Giants.

Pablo Sandoval posted yet another solid season this year, with 16 home runs, 79 RBIs and a .279 batting average. Already this postseason, Kung Fu Panda has gone off. Sandoval has really changed for the better defensively this season, and that showed with his spectacular catch while flipping into the dugout during the Wild Card game. So far this postseason, Sandoval has six hits, one RBI and a .261 batting average. Look for this to only improve, as Sandoval will be working his hardest because he is up for a new contract. Since this might be his last couple games in orange and black, expect Sandoval to go out fighting, or earn himself a great new contract in the rest of the postseason.

Joe Panik is a beast of a rookie. Panik is a solid, dependable hitter and fielder that the Giants grew to love when they made him their starter in the spring, after losing Marco Scutaro for the season. Panik quickly flourished, with one home run, 18 RBIs and .305 batting average. Panik continued his success in the postseason in a dominant fashion so far, with seven hits, two RBIs and a .292 batting average. Expect Panik to continue to be an offensive power that will help drive the Giants to the World Series.

Madison Bumgarner, aka MadBum, is a force to be reckoned with. This season was perhaps his most dominant, and he finished with an 18-10 record, and a 2.98 ERA. Bumgarner has also shown how reliable he is in the playoffs, with a 1-1 record and a 1.13 ERA. Additionally, this menacing 6’5” beast is a force to be reckoned with offensively as well. Bumgarner has pop, and even recorded two grand slams this year. If Bumgarner is on for the rest of the playoffs, there is no doubt that the Giants will win the World Series for the third time in five years.

Nelson Cruz put the Orioles on the map, with a monstrous season this year. Cruz had 40 home runs, 108 RBIs and a .271 batting average. And to top that, Cruz has had an even better postseason in just three games with six hits, two home runs, five RBIs and a .500 batting average. If Cruz performs, then the Orioles will do well, and that is exactly what he has been doing. If Cruz keeps this play up, look for them to have a serious shot at the World Series.

Eric Hosmer is a beast. That is all. In four postseason games in 2014, Hosmer has tallied two home runs, five RBIs and a .500 batting average. While Hosmer did not have an amazing season with just nine home runs, 58 RBIs and a .270 batting average, he has a knack for heroics in the playoffs. Hosmer’s clutch triple in extra innings is the sole reason the Royals are heading to the ALCS, and he will continue to be massively clutch. for Hosmer to erupt against the solid, but not great pitching of the Baltimore Orioles while paving Kansas City’s road to the World Series.

Matt Carpenter has easily been the best player in the postseason so far, at least of those whose teams are still alive. The Cardinals’ third baseman had a good season with eight home runs, 59 RBIs and a .272 batting average, but he has had an even better postseason. In just four postseason games, Carpenter has three home runs, six hits, seven RBIs and a .375 batting average. In other words, he has raked. If the Cards hope stand a fighting chance against the team that beat them in the 2012 NLCS, the San Francisco Giants.