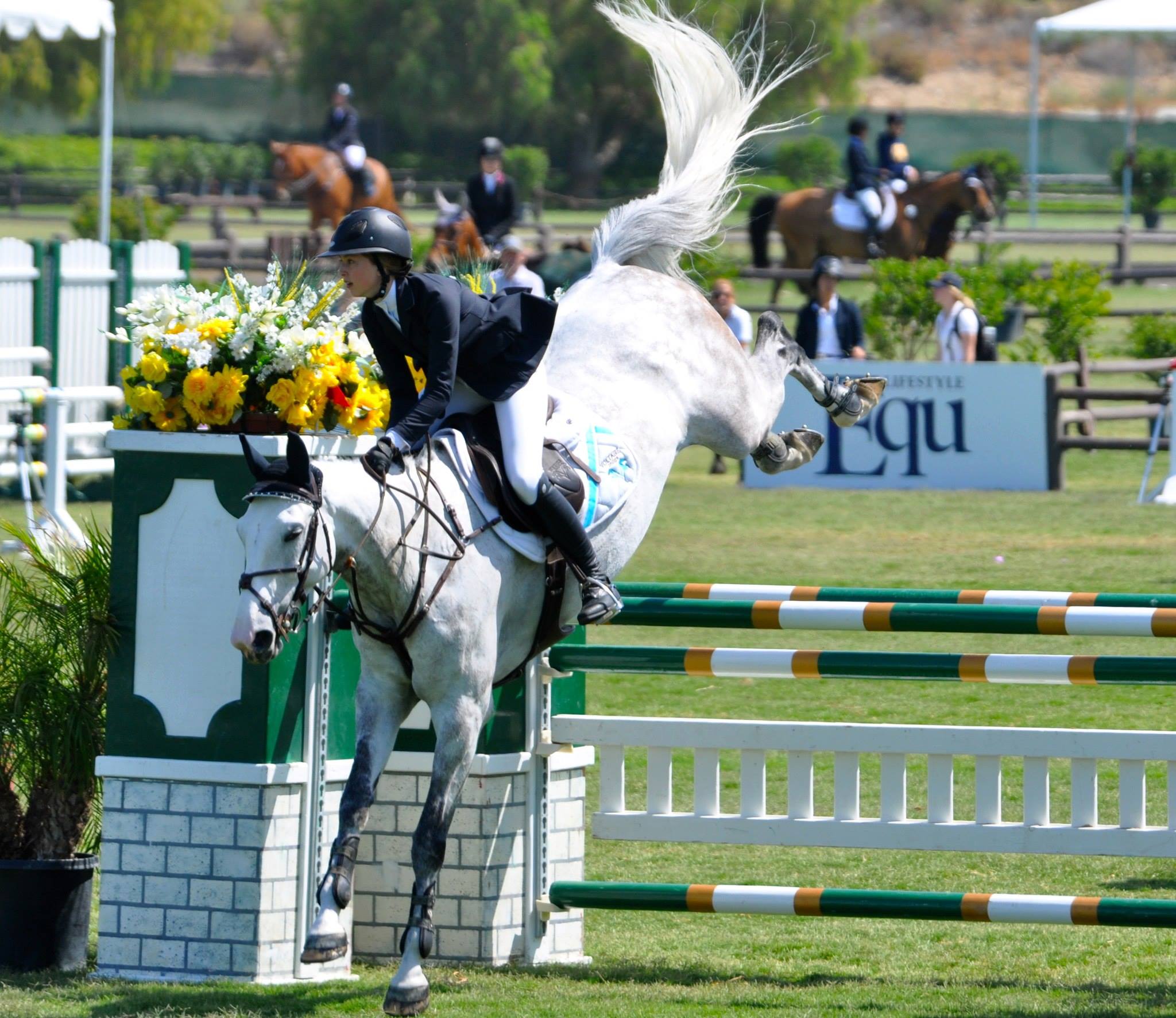 Most little girls day dream about riding horses, for equestrians, that dream is their reality.

Equestrian is the sport where the horse is considered as much of an athlete as the rider. It is a sport enjoyed frequently by our common peers and also by royalty. Equestrian has claimed its spot in the Olympics in 1912 and since then has had strong claims as one of the most unique sports to partake in the Olympic games. It is one of the few sports that favors experience over youth, the previous equestrian Olympians from London 2012 ages range from late twenties to mid thirties. Although only a select few athletes can make it to the Olympics, junior Eve Jobs is determined to achieve her dreams. Her promising equestrian career boasts some of the most prestigious awards one can earn at her age, setting her on the path towards competing in The World Equestrian Games and Olympic games.

Jobs first found her love for equestrian by spending time around horses. Soon after she began her equestrian career at the mere age of four, she started traveling around the country to compete at various competitions.

“I started riding when I was four years old and before that I’ve always just loved going to the barn and feeding horses,” Jobs said. “It just escalated into my passion.”

Her simple hobby of feeding horses would eventually lead to her successful career in equestrian. Jobs owns and regularly competes four horses. She currently rides with two trainers in Los Altos, Calif. whom she also travels around the country with alongside her team and horses to different competitions.

“Right now, I have four horses that are in my competition string, and they travel with me everywhere,” Jobs said. “Competitions are a really great way to meet people from around the world.”

Jobs competes primarily in show jumping, which is a member of the English riding equestrian event family. The intent of show jumping is simple and straightforward: to jump cleanly over a set course in an allotted time. It is one of the most popular and perhaps the most recognizable equestrian event, aside from Thoroughbred horse racing. Show jumpers must always be mindful of their ever ticking clock. Riders who race too fast may be at fault to careless mistakes like knocking down fences and riders who go too slowly may incur time faults. Show jumping is one of the three events of equestrian Olympic disciplines. It is essentially what pole vaulting is to track and field. Jobs has won multiple distinguished national awards for equestrian such as claiming numerous National Junior Jumper Championship titles. In addition, she has also won numerous competitions all across California, along with being on teams that have traveled to Canada and Kentucky.

Last June she competed at the North American Junior and Young Rider Championships (NAJYRC) in Kentucky, successfully placing sixth with her team. The NAJYRC competition is run by the rules of the Federation Equestre Internationale (FEI), which is the international governing body for equestrian sport. The NAJYRC is the only FEI championship held annually on the North American continent. Most equestrian competitions in the U.S. run under the United States Equestrian Federation.

Jobs considers competing and placing at the NAJYRC to be her biggest accomplishment in her equestrian career so far. The NAJYRC, which was founded in 1974, is not only extremely hard to qualify for, but it is also one of the most acclaimed competitions for young riders, ages 14 to 21, in show jumping. The NAJYRC is an international competition, and the young equestrians who compete at the NAJYRC come from several different countries such as the United States, Bermuda, Canada, Mexico, Puerto Rico and the Caribbean Islands. Several of North America’s best equestrians like Olympic medalists Karen O’Connor and McLain Ward, got their first taste of International competitions at the NAJYRC.

“Going to the Young Rider Championships would probably be my biggest achievement so far,” Jobs said. “It was really fun.”

Jobs’ success in equestrian certainly did not ensue overnight. It has taken countless hours of practice and time taken away from her free time to get to where her careeer currently stands.

“You always start on ponies,” Jobs said. “And then you get to horses and just kind of work your way up, trying to get the highest level of sport.”

Much like any other sport, equestrian requires a lot of time and a great deal of dedication. Jobs usually practices about 21 to 25 hours per week excluding competitions. With her extensive practice schedule, Jobs has had to set priorities. Although it has been difficult to find a balance between different aspects of her life, from time to time she has to miss school in order to go to competitions, Jobs believes that finding the compromise between equestrian and school is essential.

“It takes up a lot of time, and school is definitely hard to balance, but we make it work,” Jobs said. “You have to miss a lot of school for competitions but it’s fun and a great sport. It’s also very rewarding just to do well and have your hard work pay off.”

Jobs would like to continue her equestrian career after college. Ideally, by the end of the year, Jobs hopes to have competed in World Cup classes. However her ultimate goals regarding her future equestrian career is to make it to one day make it to The Olympics and the World Equestrian Games.

“I plan to take equestrian as far as I can, definitely after college,” Jobs said. “I want to try and start playing in some World Cup classes by the end of the year. I’m not trying to compete at the World Cup this year, I just want to go to some qualifying competitions to get experience. Ultimately, I want to make it to the World Equestrian Games and the Olympics but, I still have a long way to go.”

In order to qualify for the World Cup, the equestrian must compete in a certain number of the World Cup qualifying classes to earn points in order to be be able to participate as a contestant for the prestigious equestrian competition.

Contrary to how the term ‘classes’ sounds, ‘Classes’ in terms of horseback riding are not equestrian lessons, but rather they are events at competitions or horse shows. Each class is similar to a ‘level’ in other sports.