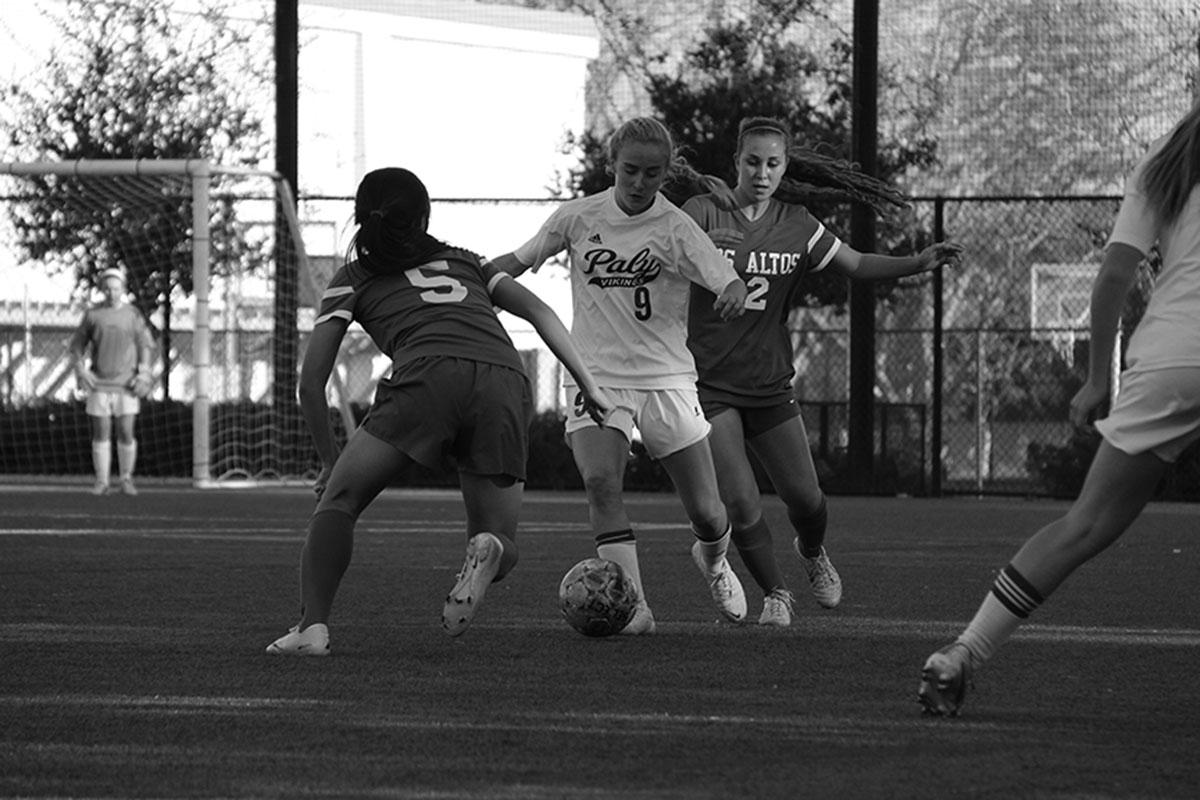 Varsity girls soccer tied for first in their league

Despite the team’s first loss this season to Santa Clara High School on Thursday, Jan. 15, the Lady Vikes came back strong in their defeat of Mountain View High School on Tuesday, Jan. 20 among several successes to follow.

The team currently holds an overall record of 12-1 and a league record of 6-1.

Up until Jan. 15, the Paly girls soccer team was undefeated. Though the 2-1 loss to Santa Clara broke the team’s winning streak, the team picked itself back up and continued fighting.

“I think we lost because we have had a lot of issues getting our shots on frame and missed some key opportunities in front of the goal,” Woodfill said. “Losing to Santa Clara inspired us to work harder. I believe we were the better team, but it wasn’t shown in the result and we don’t want to be in that kind of position again.”

Coming up right after the match against Santa Clara High School was the game against Mountain View High School, which members like senior Olivia Musil have considered their greatest competitor and were looking forwaerd to a tough game.

Though the recent loss could have greatly discouraged the team members, instead, they held a positive stance and mindset.

This game was critical for the team because it determined what position Paly girls soccer would hold in the SCVAL De Anza Division.

When preparing for the game, not only was the entire team focused on working as a whole unit but individuals also made specific goals  for themselves.

Sophomore Tess Preising scored both goals for Paly in the game to secure the team’s 2-0 win and described her experience before and during the game.

“My goals were all based on a great team effort and some beautiful through balls,” Preising said. “The win against Mountain View was one of many wins but sparked our confidence.”

Dedicated and insightful players like Woodfill were able to identify specific strategies and skills that worked for the team.

“We played especially well in the second half and started connecting passes really well,” Woodfill said.

She also accredited the team’s success to its acknowledgement of the game’s significance.

“Mountain View [players] have been really strong competitors the last couple years, so it was an important win for the team,” Woodfill said.

Preising believes the team’s success was largely a result of how the team went into the game.

“I think in the Mountain View game, our whole team had a very positive attitude before the game started,” Preising said. “We stayed very composed. Throughout the game we remained balanced in our sportsmanship, yet still made the other team worry about us.”

According to Musil, the Mountain View game was invaluable for more than just the win and status.

“The Mountain View game was a great battle,” Musil said. “We played our type of high intensity soccer. Our hard work and our composure helped us secure a win. Coming out of that game I was incredibly proud of my teammates and their effort.”

Following the Mountain View game, the Paly varsity girls soccer played against Homestead High School on Thursday, Jan. 22 and won by a score of 4-0, maintaining its lead.

“I think that we all knew the win against Homestead was crucial to stay in first place, … [which] is great for the team because it demonstrates all our hard work and effort that we put through training and during the games,” Preising said. “[Like for the Mountain View game], the win happened because of our unity in our team and [because] when we step on the field, we are focused and determined.”

The Paly girls soccer team also won its home conference games against Los Gatos High School by a score of 2-0 on Saturday, Jan. 24. and against Los Altos High School on Thursday, Jan. 29 by 3-1.  Like in their previous games, the Lady Vikes demonstrated great coordination and energy leading up to these wins.

Even though they have been highly successful already, the team members demonstrate their maturity through their willingness to improve, their ability to identify areas needing further work, and their determination.

“I think we need to continue to work hard and improve our finishes and work on our defensive and offensive crosses,” Woodfill said.

“I know we can win any game if we set our minds to it because each player has so much passion and desire that they put on the field,” Preising said. “The Paly team has so many skilled and talented players. I know we’ll work hard and keep up the good work as we look toward playing in the Central Coast Section playoffs.”