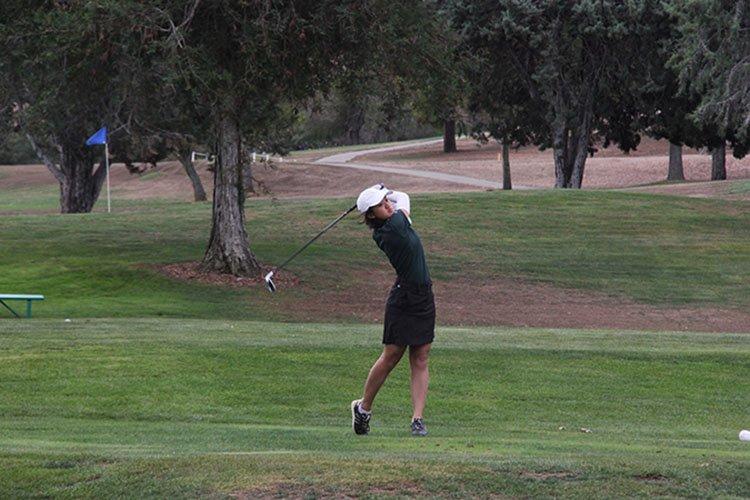 Girls golf team shines as it heads into Leagues and CCS

The girls golf team sought revenge as it defeated Los Gatos High School by a score of 191-200 — its best score this season — after losing to them in the first match at the beginning of the season.

The team has felt momentum gaining in the second half of the season, despite losing to Henry M. Gunn High School on Oct. 14, and freshman varsity golfer Jasmine Choi believes the game shaped the team’s attitude.

“Our team played really well against Gunn even though we lost to them,” Choi said. “The score we got was the best one since the season started, and that was the moment when we all realized that we could improve more.”

Playing on the team as the only freshman and seated as the number six player, Choi has adapted well to playing at the high school level and believes that the lack of seniors has strengthened the team.

“I was the only freshman but all of my teammates helped me a lot, especially when I went to the new courses that I wasn’t entirely familiar with,” Choi said.

After the team’s most recent win against Los Gatos with its lowest score yet, the girls solidified their place as the fourth best team in the league with an overall score of 9-4-1. With the current Santa Clara Valley League (SCVAL) rankings, coach Doyle Knight believes that the team is on a positive slope for the league championships and possibly for the Central Coast Section (CCS) Championships.

“The girls are playing really great right now, which is good going into Leagues and CCS,” Knight said. “Doesn’t necessarily guarantee us anything but it gives us a good shot to do well.”

In past years, the team has been known as a powerful force in the League, but this year, the girls had to fight to stay on top.

“We have played well all season long, it just seems the other teams we lost to played better on that day,” Knight said. “Our average score all year long is within one stroke of Gunn, who won the league title again, but that is pretty much nothing in golf.”

Throughout the season, the team has worked hard to overcome its impediments facing CCS, but the girls do not think that the team’s lack of seniors has held them back during the season.

Knight recognizes the potential in each of the girls’ playing ability, and is proud of how the team has adapted compared to the other teams in the league.

“I’m real happy with the way they are playing and coming together as a team,” Knight said. “The nice surprise this year has been Jasmine Choi, our freshman. She has improved steadily all season long with junior, Celia Willner.”

Not only have other players improved their technique, others helped give the team consistency throughout the season, according to Knight.

“[Junior] Stephanie Yu has the lowest average on the team, and [junior] Emily Hwang has played solidly all season,” Knight said.

Choi is confident that the team will have the mental and physical strength to win during SCVAL, but the girls must transfer what they learned in training onto the course.

“I think we are ready for the tournament, we just want everyone to hit their average score,” Choi said.