What makes surfing fun? Part of it is the anticipation of tracking a storm over several weeks, waiting for the imminent waves the storm will create. Part of it is the fear of watching the waves reach land in an explosion of water and sound. Part of it is the horror of wavering at the top of the wave, staring down into the blackness below and thinking about how sharp the rocks at the bottom are. But the exhilaration of skimming down the wave, narrowly dodging other people and just barely staying ahead of roiling foam combines the amalgamation of emotions together, creating a sport that many call “fun.”

Yet, surfing is a foreign sport to most Palo Alto High School students. This may be because of the difficult learning curve involved and one-hour drive needed to reach Santa Cruz, Calif., the most popular surfing destination in the Bay Area.

Learning to surf requires commitment and uncharacteristic patience. Juniors Peter Wisowaty and Johnny Rohrbach are familiar with the time required to learn how to surf well, as they have been surfing for four and 12 years, respectively.

“I’ve been surfing since I was 5 years old. I saw a surf camp, and not understanding that you had to pay to be there, ran up and stole a surfboard. And that was that.” 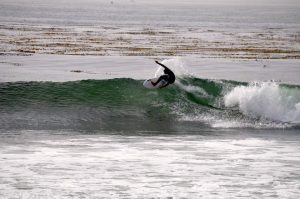 Johnny Rohrbach performs a trick called a “cutback” at the top of the wave.

Over time, the gap between people’s perceptions of surfing and the reality of the sport has grown further and further apart. First of all, the sunny beaches, palm trees and long wooden boards which most people imagine when thinking about surfing have been replaced with frigid waters, stone cliffs and shortboards made of expensive composite materials.

“In northern California you have to wear a wetsuit,” Wisowaty said. “You’re freezing your a** off in the water until you start moving around, and it’s not fun.”

The second misconception about surfing concerns the surfers themselves. The stereotypical surfer is pictured as either a tan male model or an anti-society rebel who dons beanies and rides around on a skateboard. They are generally unmotivated, even slackers at times.

“[People] think [surfers] are ripped or hippies,” Wisowaty said. “I mean that’s obviously not true because look at Johnny [Rohrbach]. Now look at me. We don’t exactly fit the stereotype.”

Surfers are known for their “Aloha” attitude and their acceptance of other surfers, associating each other like family. Unfortunately, this is also a myth.

Surfers have a vocabulary that is dedicated to describing how other people interfered with their waves.  Among this vocabulary are the phrases “dropped in,” “burned” and “cut me off” — terms which describe the relative position of two surfers are on the same wave. When accusations are made in the form of surfer slang, hostilities between surfers can reach an all time high.

“For the most part people are really really mean in Santa Cruz,” Rohrbach said. “One time this guy got really aggro and punched me in the temple after I dropped in on him.” 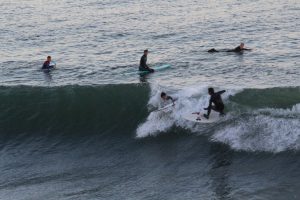 With all the complaints out of the way, the question of why people surf still remains. For Rohrbach, the stereotypes that surround surfing add a “cool” factor to the sport. The crowds, which are usually an annoyance and potential hazard, are also part of the equation.

“There’s this persona built around surfing [that describes] the cool, nice, hippie guy that just loves the sport, and that appeals to a lot of people,” Rohrbach said. “Also, when you get a good wave and people are watching you do something sick — that’s awesome.”

Both Wisowaty and Rohrbach used the word “fun” to describe their reasons for surfing. This fun comes from an adrenaline rush that ensues as the two juniors narrowly avoid rocks, people and even their own board while surfing.

Over the years, the two have made mistakes and sustained bloody injuries. Wisowaty has three stitches on his head from hitting the reef, while Rohrbach has nine stitches from collisions with rock piles. Rohrbach also has scars on his knee and butt where the fin of the board has impaled him, as well as various cuts on his mouth and face where other surfers have rammed into him. Wisowaty has  developed a fear of receiving more of these injuries, and the rush of evading danger factors into his enjoyment of surfing.

Despite occasional confrontations with other surfers, surfing has the potential to bring people together. For Rohrbach, the best feeling in surfing is sharing his love of the sport with other people.

The warm sandy beaches that most envision are replaced with rock cliffs.

“I enjoy surfing because it’s something my dad and I can do together,” Rohrbach said. “I also have a lot of friends who do it, and it’s a great thing to enjoy with other people.”

Surfing provides a unique connection to nature, as surfers can reap the benefits of the waves, but also receive a brutal beating depending on their skill level. With a little bit of time and hard work, a beginner can have as much fun as a pro surfer. The act of standing up on the board brings universal joy.

“Everything else just kind of leaves your mind and you focus on one thing,” Rohrbach said. “It’s a good place to go to clear your mind and get rid of stress.”