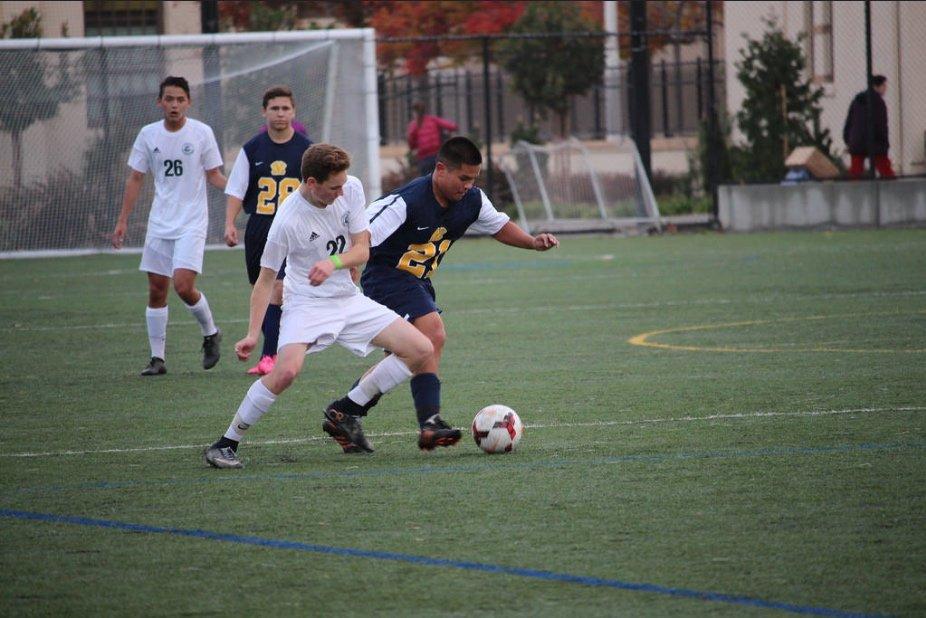 Senior Cole Tierney attempts to steal a ball while Junior Derek Schoenberger watches. Paly went on to win the scrimmage 3-0.

Season begins with victory for boys

With a final score of 3-0 against Milpitas High School, on Dec. 3, the boys soccer team started off the season with a scrimmage game win.

The three goals were scored by junior Neil Verwillow and seniors Dami Bolarinwa and Roberto Sotelo as the Paly team shut out Milpitas. Junior Derek Schoenberger believes that this first win is what will drive the players to be a more cohesive team.

“I think a win is what we needed as a team,” Schoenberger said. “We were still figuring some stuff out coming into [the Milpitas] game and changed player’s positions throughout the game and I think a win really boosted the team’s confidence.”

Senior Cole Tierney also looks back on the first unofficial game of the season as a learning experience and a concrete starting point for the team’s improvement during the regular season.

Schoenberger believes that the defense was underutilized and that defensive players were not able to show their worth.

“Offensively we had a lot of good opportunities, but we definitely need to work on our finishing and team chemistry when we’re building the ball to goal,” Schoenberger said. “The defense wasn’t challenged very much this game, but something we could improve on all around is our communication.”

The team scored one of its goals in the first half of the game and the other two in the second half, but Tierney thinks that those numbers could have been much larger if the team had played at its fullest potential.

“If we had capitalized on all our chances in the first half we could’ve ended the half up by at least 4,” Tierney said. “Defensively there were very few errors but unfortunately the defense and Eli [Friedlander], our goalkeeper, were hardly tested in this game.”

The boys soccer team lost five seniors last year and two sophomores have since been moved up to varsity in an attempt to fill the shoes the seniors left vacant. Senior Eli Friedlander believes that the team will deal with the losses in a strong way and the younger team members will be able to play at the same level as the other team members.

“They [the new players] have really stepped up and shown that they deserve to be where they are,” Friedlander said. “We definitely miss Wesley Woo, Preston Kuppe, and Steven Blatman, but we also have a lot of guys that are more than capable to take over.”

Looking ahead Schoenberger also believes that with the returning players and the addition of underclassmen, the team should place well in its league.

“There are only two underclassmen on the team this year and both are very good; despite their age they always seem to impress me with how they play,” Schoenberger said. “Considering the amount of returning players from last year, I believe this is going to be a very strong year for Paly soccer.”

With a team full of strong defensive and offensive players, the boys soccer team is sure to make a name for itself.