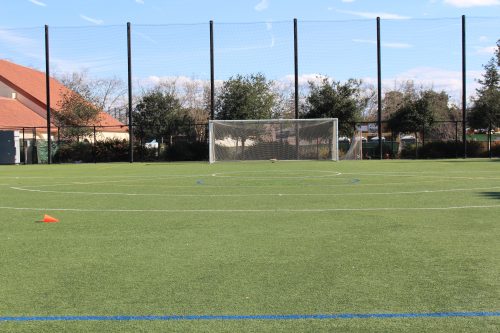 Tradeoffs of turf: studies show that turf may have links to cancer

It’s everywhere. It sticks to your gym shirt, slides into crevices in your shoes and embeds itself in your socks. Athletes run over it, skid across it and even inhale it. It’s turf, a synthetic material that covers more than 12,000 athletic fields in the United States. Turf has become popular for its durability, low maintenance and cost-effectiveness. The rubber crumbs have spread like wildfire across the country, and have been used in playgrounds. But as the number of turf fields grows, so do concerns about the risks they pose.

First invented in the 1960s, turf fields seemed like the perfect solution to some common problems caused by grass fields; the synthetic alternatives were more durable, easier to maintain, saved water and didn’t require harmful pesticides. Teams could play in almost all weather conditions without destroying their playing fields; injuries like scrapes and cuts were considerably reduced because athletes were not slipping in mud. Recycled tires mimicked the role of dirt and helped keep the rubber out of landfills.

“Turf costs less and is easier to play on than a lot of grass fields, but they also are a lot more dangerous to play on regarding slide tackling and goalkeeper diving.”

Although it had many advantages that had not been used before, turf was never truly flawless. Early models, known as “ChemGrass” or “AstroTurf,” made harder surfaces than grass fields, leading to a surge of joint injuries and other problems among athletes. Additionally, a Center for Disease Control report from 2013 found that older models of turf made of nylon or nylon/polyethylene fibers contained troubling amounts of lead. Other health concerns stemming from older models of turf include zinc poisoning, respiratory problems for asthmatics and toxic runoff from the lead paint.

However, research suggests that the turf fibers might not even be the most dangerous part of the field: the little black balls underneath the turf fibers are. Amy Griffin, a former American soccer player and current assistant coach of the women’s soccer team at University of Washington (UW), became one of the more outspoken advocates against turf fields when she noticed that some teammates and players under her management at UW had been diagnosed with cancer. Many of her players suffered from an array of blood cancers including leukemia and lymphoma. Griffin began compiling a list of athletes who had contracted cancer in 2014, and since then the list has grown to include more than 200 people. 150 of the players on her list played soccer, and 95 of the soccer players were goalkeepers.

“I think more tests need to be done. I just don’t quite know if it’s a direct link yet.”

“Goalkeepers get [rubber crumbs] in their sides, hips [and] elbows [as well as] abrasions from sliding on the stuff,” said Griffin in an interview with CNN. “So if they have an open sore, not only the black dots but the dust particles that you can’t even see when the tire crumb breaks down so small get in there. I’m sure you eat it and inhale it. Just in a 10-minute warm up, our keepers will hit the ground anywhere from 50 to 100 times.”

While there is still not a clear consensus on the effects of playing on turf, the Environmental Protection Agency has identified carcinogens like mercury, arsenic and benzene inside the tire crumbs. However, many manufacturers of the turf cite statistics that show no increased risk to athletes who play on turf fields.

“I don’t [believe that turf causes cancer],” said P.E. teacher Jason Fung. “There’s so many kids, so many places in so many parts of the world that play on this stuff, and what’s the percentage of kids that actually have that cancer, right? I think more tests need to be done. I just don’t quite know if it’s a direct link yet.”

Despite the studies cited by turf manufacturers, many scientists are calling for additional research and follow-up studies, as the effects of the chemicals in the rubber crumbs are slow-acting and tend to develop over time. Many existing studies also focused on the effects of turf on the air surrounding synthetic fields. While this area of research is important, it is not a completely accurate assessment of the risks turf fields pose to those that use them, as athletes who are scraping themselves on turf and inhaling the rubber particles are exposed to much higher levels of the chemicals than those who are standing in the vicinity of a turf field.

“Turf costs less and is easier to play on than a lot of grass fields, but they also are a lot more dangerous to play on regarding slide tackling and goalkeeper diving,” said junior and varsity soccer player Emily Tomz. “Getting turf burns and finding turf in my hair after I play soccer is kind of the usual.”

Palo Alto High School, among other attributes, is known for its excellent athletic program. Both the varsity and junior varsity soccer and lacrosse teams practice over 10 hours a week on turf fields.  The football team trains on Astroturf fields every fall, and P.E. classes do warm ups on the synthetic grass. Though there are definite benefits to using turf, there is still an enormous amount of risk and uncertainty for the athletes. It’s time to ask ourselves whether the trade-off is worth it.