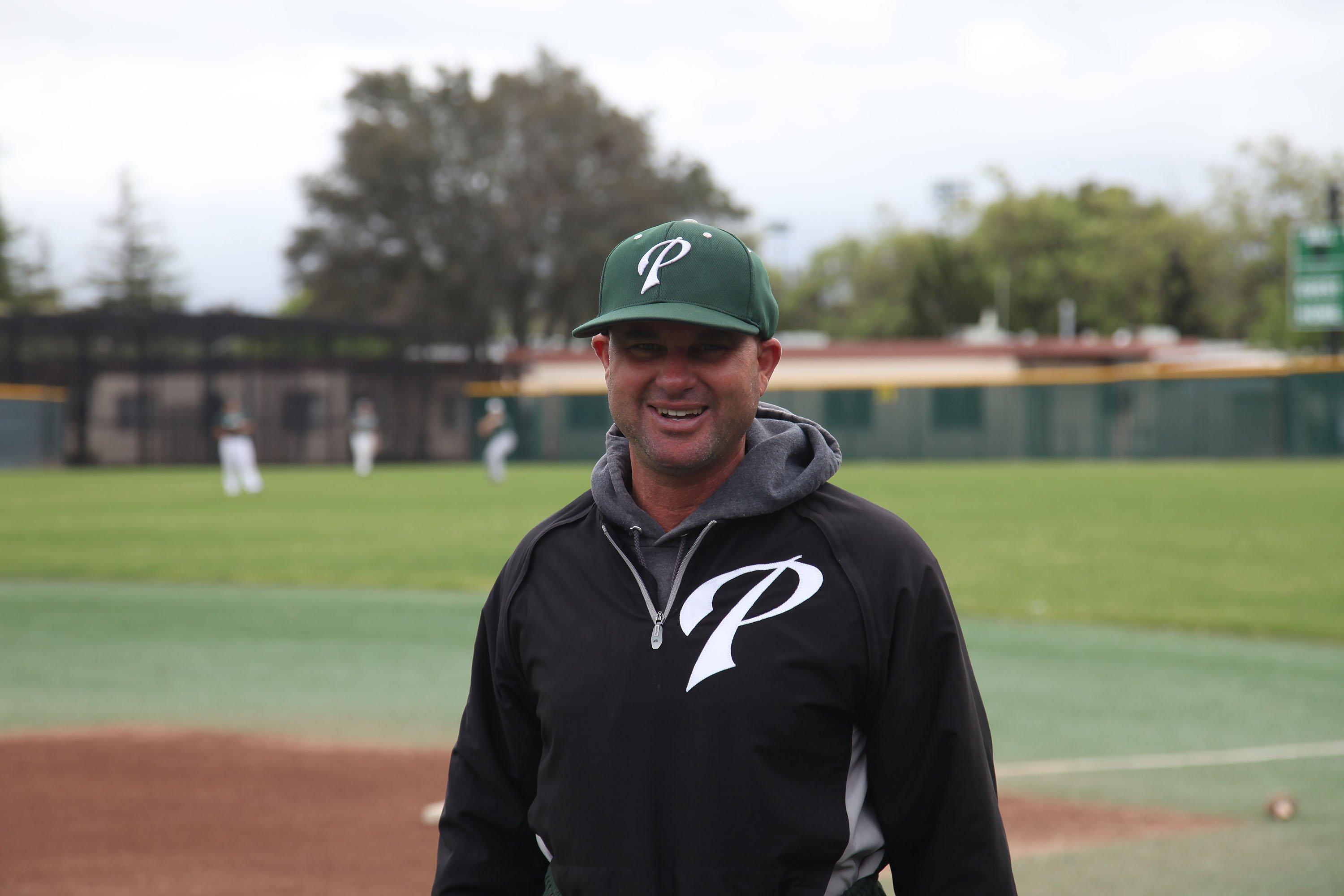 Pete Colombo: the man behind the mitt

Edan Sneh
Sports
April 26, 2017
Those who know him have very few bad things to say about him, probably because current Palo Alto High School varsity baseball assistant coach Pete Colombo is an enormous asset to the team for his skills both on and off the diamond.

Colombo resumed coaching Paly baseball in 2011 after a brief hiatus; however, his roots in the Palo Alto Unified School District (PAUSD) and coaching expertise extend long beforehand. Colombo has been a coach since 1993, starting off at Junipero Serra High School as the head coach of a JV squad. His tenure at Paly started in 1998 and he was the head coach from 2000 to 2005. Colombo ended up leading the 2004 Paly baseball team to a Central Coast Section (CCS) open division title appearance, defeating powerhouses Saint Francis High School and Bellarmine College Preparatory school for an unprecedented, second place finish.

While Colombo has the most experience coaching baseball, his expertise is not limited to the sport.

Colombo is unique when it comes to his coaching style and his attitude towards students. He exudes a dangerously infectious sense of charisma and enthusiasm.

“[Colombo] is unlike other coaches because he is always having fun and always goofing around, but he still gets on you if you’re slacking,” said junior George Welch.

Colombo’s love for coaching comes from his love for working with kids. Because he was so passionate, for a few years at Paly as a head coach, Colombo even worked without pay.

Colombo is unique when it comes to his coaching style and his attitude towards students. He exudes a dangerously infectious sense of charisma and enthusiasm.

“I didn’t care,” Colombo said. “You’re not doing it for the money, you’re doing it because you love kids. You want to teach the kids to compete and play the game the right way, be fundamentally sound, especially on defense.”

Colombo explained that his hate for paperwork and his gratitude for the District sticking by him through some difficult times made working without pay feel like a way of giving back.

Of all the positive remarks that can be said about Colombo, his passion and energy for coaching most certainly shine the brightest. Colombo’s energy was so prevalent that when asked about what his players thought about him, he immediately shouted to one of his players, asking them what they thought about him:

Not only does Colombo’s passion and energy comes from his enthusiasm for the student at Paly, but also for PAUSD. Colombo is especially grateful to Paly varsity baseball head coach Pete Fukuhara, who allows Colombo to be part of the program and gives him freedom while coaching the kids.

“[The students] are smart, they’re respectful and they will work hard for you if they buy into your system,” Colombo said. “I am the luckiest man in the world. I will teach and coach until I am 70, easy.”

Colombo’s honesty separates him from many coaches because he is able to get players working in the right direction.

“I’ll rip a kid, but later I will come back and touch base in a positive manner to let them know I care about them,” Colombo said. “When kids see humility and that you will make fun of yourself a little bit, they buy into that and will play hard for you. This should not apply to just coaches, but to any teacher who wants their kids to work hard.”

Of all the positive remarks that can be said about Colombo, his passion and energy for coaching most certainly shine the brightest.

“Colombo is honest with you, because he knows that if he makes stuff up about your playing then you are not going to get any better,” said junior Ole Erickson.

To Colombo, it does not matter what sport he is teaching, as long as the kids are learning fundamentals, and he is running a tight ship.

In fact, in 2010, during his time in PAUSD, Colombo coached football for his first time — a game in which he had no prior experience. Focusing hard on teamwork and learning the basics of the game, with the help of a few coordinators, the team ended up with a winning record of 8-2 in the season.

Colombo’s uniqueness as a coach comes from his goal of teaching players a bigger lesson than the game.

Colombo’s experiences over his 20 plus years of coaching have taught him many things about life.

“We are all going to make mistakes in life, its how we get up,” Colombo said, referencing the popular Japanese saying: “Fall seven times, stand up eight.”

“There are so many important life lessons that can be taught through sports,” Colombo said. “Working together as a team, putting the team before yourself and working together to achieve a common goal.”

He explained that sometimes his wife’s problems with coworkers at work are similar to lessons that he teaches.

“My wife, who works in high tech, shares with me the problems going on at work, and I will use those life lessons during team time with the kids,” Colombo said.

He prepares his players for the real world, not just the sports world.

“If you’re stuck with something, look for a solution and keep moving forward,” Colombo said. “In the real world now, everything is working on teams.”