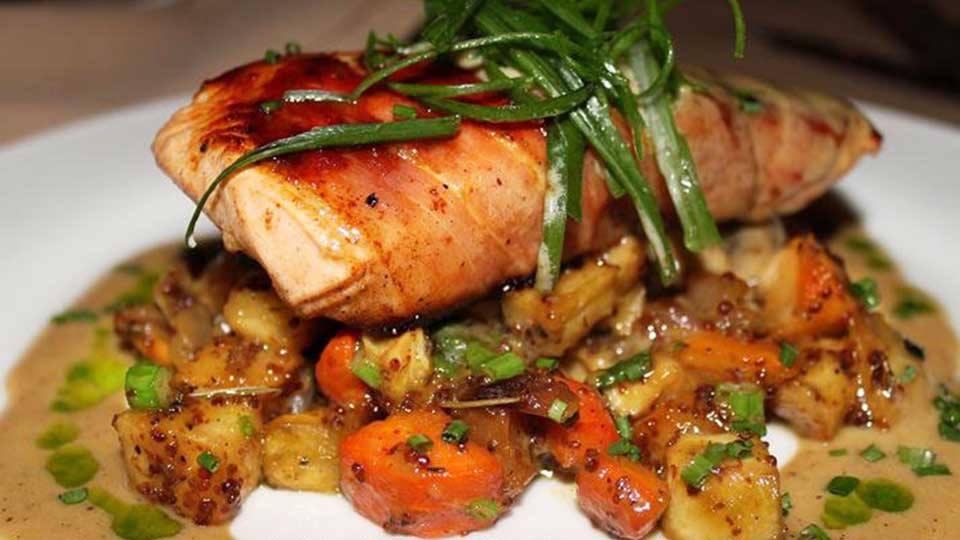 Peeking behind the curtains of California’s culinary culture

Ever watched an episode of Food Network’s popular television show “Chopped”? The precision with which nominated chefs execute their dishes is mesmerizing; they streak brightly-colored sauces onto their creations with a refined flourish.

As these highly-qualified chefs add the finishing touches to their dishes, the judges proceed to break down the masterpieces, skeptically surveying the plates to identify the different elements of composition and flavor.

“There is certainly an artistic side to cooking, and depending on the chef, sometimes that is taken to an extreme.”

The world of cooking is mysterious and complex. Numerous books, such as “The Art and Science of Culinary Preparation” by Jerald W. Chesser, detail the “theory of cooking” and “presenting the fundamentals of culinary arts in a fashion that leads the customer to the heart of the subject.”

There has to be a way to bridge the gap between the abilities of average and master chefs. In order to do so, one must break down the world of cooking and set attainable goals.

After choosing to scope out an inside perspective from culinary experts right here in Palo Alto, the top pick was popular modern Californian restaurant Saint Michael’s Alley, located downtown at 140 Homer Ave.

In a discussion about the fundamentals of cooking, executive chef Gary Messick initially detailed the presentational aspect, explaining that “there is certainly an artistic side to [cooking], and depending on the restaurant and the chef, sometimes that is taken to an extreme.”

It seems like the more upscale a restaurant, the higher the emphasis is on presentation – customers who seek these classy dining experiences are willing to pay for expensive plates of extremely small portions containing exotic blends of ingredients.

In a more casual restaurant, providing customer satisfaction is focused upon “sustenance and feeding people, much more about the entertainment [of the food itself rather] than the art,” Messick said.

In the process of creating such a dish, composition takes priority over presentation, which is considered only the final component of the process, according to Messick.

“I start with flavor profiles, and try to compose a dish that has enough contrast and complementary flavors to work as a dish, and then look at different ways of presenting it so it’s visually appealing as well,” Messick said. “I would never put anything on a dish just to accentuate the vibrant colors; it has to be a contributing factor to the dish.”

In his opinion, many chefs try to overcomplicate their dishes, taking away from the charm of simplicity.

“Food is inherently simple; you can come up with interesting combinations that don’t involve 20 different ingredients,” Messick said. “I really enjoy presenting a clean dish. I want my customers to appreciate the fact that thought has gone into the dish while refraining from appearing to be overly contrived.”

By now it had been established that presentation was not the focus of this inquisition, but rather the aspects that make a dish captivating: something that effortlessly entertains the diner.

“Food is inherently simple; you can come up with interesting combinations that don’t involve different ingredients.”

Saint Michael’s Alley takes pride in using fresh, locally-sourced ingredients, and builds its menu around what they can access at the time.

“We really focus on being seasonal, and even micro-seasonal,” Messick said. “We do change the menu quarterly, but there are several ingredients that are only available every two or three weeks a year, so we’ll try to highlight these items during this time, when they’re freshest and at their best.”

The restaurant’s success and popularity stem from the farm-to-table approach, in which locally-grown ingredients dominate the menu. This approach where American chef Alice Waters, whose palate had been sculpted by seasonal food while living in France.

“I was looking for taste, and I couldn’t find taste until I found the local farmers who were growing vegetables for flavor.”

In an interview with CNN, Waters detailed her experience opening her own restaurant and explained how she realized the importance of her ingredients and their sources.

“I was looking for taste, and I couldn’t find taste until I found the local organic farmers who were growing vegetables for flavor,” Waters told CNN. “It’s when I met them and realized that I was dependent on them for the success of the restaurant that I put [local, organic, ingredients] together.”

The fact that distinguished chefs have adopted this approach should not intimidate people, because anyone can develop these simple, helpful habits at the grocery store.

Draw inspiration from Waters and her realization about ingredients, and remember that “food is inherently simple,” in the words of Messick.