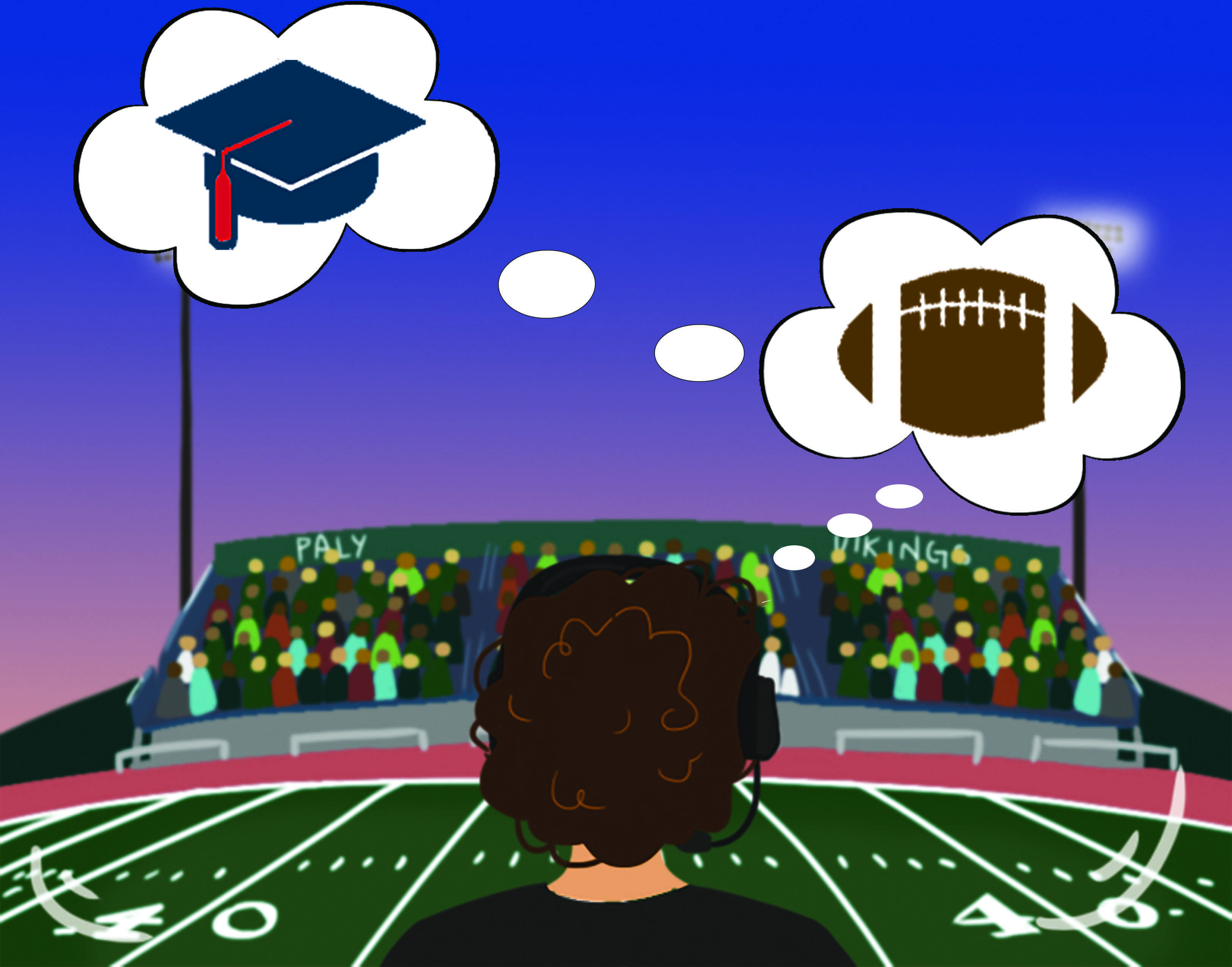 The year is 1992 and it’s a brisk January morning in Palo Alto. Ronald Michael McNulty makes his way onto the Palo Alto High School campus. He’s been assigned to be a student teacher for a semester so he can complete his teaching certification and is also taking over the Paly publication The Campanile  for one semester. Little does he know that he will make a huge impact on Paly sports history.

McNulty’s affinity for sports started young. He played on various teams throughout high school and continued on to play intramurals in college. An avid sports fan, McNulty wrote a sports column for the school paper while attending Gonzaga University in Spokane, Wash. Most importantly, he began announcing for a radio station in Spokane, sparking his interest in announcing.

“My dad had me playing catch before I could walk; I was born to it,” McNulty said.

Following graduation, McNulty left the announcing scene behind for a while to work in public relations at Santa Clara University for 10 years. There, he dealt with publicity for the university’s athletics program. However, after 10 years, McNulty developed a yearning for something new.

After his time at Santa Clara, he decided that teaching was where his true passions lied. McNulty returned to school in hopes to become a teacher and came to the Palo Alto Unified School District to complete his one-year student teaching requirement.

He first taught for one semester at Jane Lathrop Stanford Middle School, but when Paly journalism teacher Esther Wojcicki left for sabbatical, McNulty took her place for a semester at Paly. After his year as a student teacher, he was offered a full time job at Paly as a part of the journalism program, where he made many contributions to the community during his time there. McNulty began numerous programs in the journalism and English departments, including the Sports Literature program and the Freshman Together Everyone Achieves More (TEAM) program. McNulty has since retired, but continues to announce for the football games and substitute for journalism and English teachers occasionally.

“He was really cool to have as a sub and provided a lot of knowledge, and told us a lot of cool stories about his time at Paly,” said junior Charlotte Amsbaugh, who had him as a substitute recently.

McNulty  enjoys teaching students just as much as they enjoy having him teach, especially because the job is fullfilling to him.

“I’ve been really lucky in my life because I had the chance to do just about everything I wanted to do,” McNulty said. “Teaching was almost an accident that I got into. Once I did, I eventually discovered that it was the best thing I ever did, the most satisfying thing that  [I’ve ever done]. I don’t think I ever had a bad day here.”

For the past 20 years, McNulty has been the announcer for the football team and occasionally the boys and girls basketball teams. After physical education teacher Pete Diepenbrock stepped down from the position due to personal conflicts, McNulty was asked to replace him due to his vast experience in both athletics and announcing.

Many teachers have gotten to know McNulty very well over the years. During McNulty’s time in the English department, he served as Diepenbrock’s mentor.

“I would describe his character by saying that he is a character,” Diepenbrock said. “He is an extremely knowledgeable sports fan, knows about all different sports and a very very caring teacher that did everything he could to help every student that he taught.”

In order to prepare for fast-paced games, McNulty said he studies the names and numbers of athletes on each team prior to games and keeps track of plays made during the game in a notebook as he announces.

Paly’s 2010 football season was one to remember for McNulty, who had followed the team from the start. McNulty said his favorite game of all time was the home game against Archbishop Mitty High School in 2010, eventually leading up to Paly’s California Interscholastic Federation Championship win. The 2010 football team was not projected to win at all; in fact, McNulty said it was a shock to many that they even made it that far.

In the past 20 years, McNulty has seen the highs and lows of Paly’s football team which gives him unique perspectives.

“We’ve had some phenomenal years,” McNulty said. “Times have been a little bit lean the last few of years, but it goes in cycles. We’ve been fortunate to have such exceptional coaches and athletes throughout the years.”