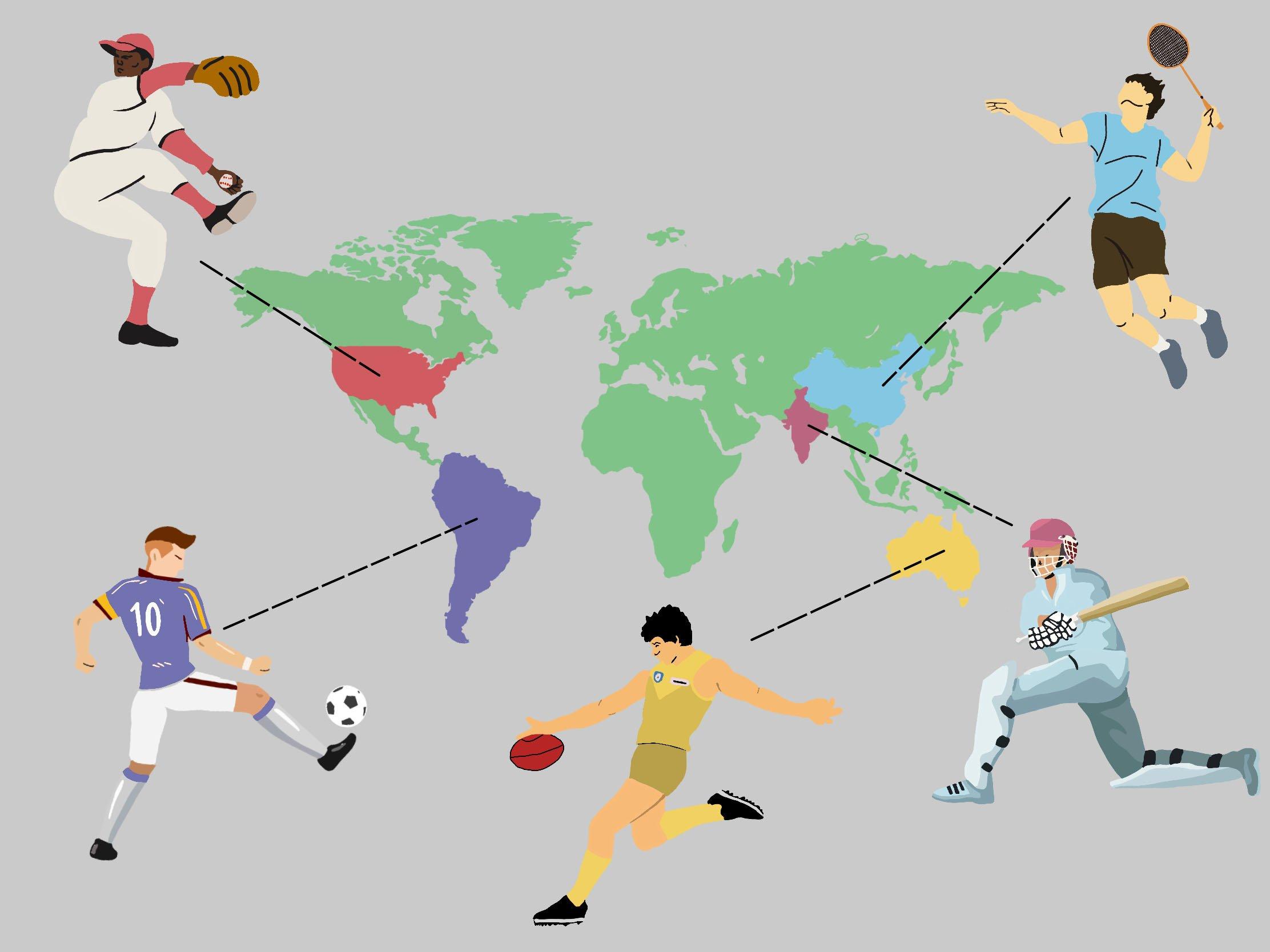 The majority of junior Francisco Moll’s life is filled with soccer. He is always thinking about the game, whether this be physically when he is on the field, or mentally when he is off of it.

Through his Brazilian heritage, Moll said he fell in love with soccer, spending most of his free time practicing two hours a day, five times a week. When he is not playing, he spends his time flipping through the pages of books covered from one end to another with soccer.

At family reunions, Moll said soccer talk constitutes most of the night. His uncles and cousins spend hours discussing their shared passion for the game.

But soccer does not only unite the members of Moll’s family — a shared love for the game is enough to unite the people of South America, Moll said.

Many countries place emphasis on a specific sport that unites the people of the country together. This trend can be seen through the emphasis put on baseball in the U.S., cricket in India, badminton in China, Australian football in Australia and soccer in Brazil.

According to Moll, soccer is an important part of the Brazilian lifestyle.

“Many of the people’s lives revolve around soccer,” Moll said. “Fans go every week to the stadiums to support their teams, even if the tickets are a bit expensive. It is a sport of union and that links all of us in Brazil.”

Moll said for many Brazilians living in poverty, soccer is an easy sport for locals to play and look to as a source of happiness. Soccer does not require expensive equipment — all that is needed is a ball and a couple of people who love the sport.

“I think South America puts a big emphasis on soccer because it is a sport that unites a lot of people and just brings so much joy,” Moll said. “Countries there are suffering a lot in the midst of poverty, hunger and violence, so I think soccer just provides an easy escape and happiness to all that are engaging in it.”

Brazil has produced numerous soccer stars such as Pelé, Zico, Neymar and Alisson Becker, and Moll said these athletes have become a beacon of hope for the next generation of Brazilians.

Moll said soccer has impacted Brazilian culture drastically and he is among the many Brazilians who focuses everything on soccer championships.

“Even living in Palo Alto, I am still highly connected with soccer in Brazil,” Moll said. “During break, I even went to South America to watch a championship final match.”

Moll said the culture built around soccer in Brazil can be credited to generations of successful soccer players and plentiful championship wins.

Baseball in the U.S.

Baseball has been known as the U.S.’s national sport for centuries. According to junior Vijay Homan, baseball brings generations of Americans together.

“Baseball has been a sport that has brought families together for generations,” Homan said. “For instance, sometimes entire families all root for a specific team, and show their support in different ways. As America has grown, baseball has been by its side.”

“I would say that baseball has had a very positive effect on me,” Homan said. “I loved playing it as a young kid, and some of my best memories are of playing baseball. Also, I think it would suffice to say that baseball reveals character.”

Unlike American football, which appeared 47 years after, baseball has been “America’s sport” for 175 years.

Starting out as a game dubbed “rounders” and played on sandlots before the American Civil War, baseball was a sport that many Americans played as a pastime.

“I think America puts so much emphasis on baseball because it is America’s sport,” Homan said. “Baseball defines a portion of our culture and livelihood, and it’s something that can be used to identify our country worldwide.”

Much like soccer in Brazil, baseball is ingrained in American culture.

Homan said, “Since baseball is America’s pastime, it makes sense that there is more emphasis on it  here than a sport like cricket.”

“There is not a day where I do not think about cricket,” Kataria said. “Cricket has shaped so much of my character, and I have learned so many life skills from the sport. There is just something special about cricket. It requires so much skill, focus and patience. Cricket is complex yet simple. You can only enjoy and appreciate the sport once you start playing and watching it.”

Cricket originated in Britain and was not designated as India’s national sport until India won the Cricket World Cup in 1983.

This win for India sparked the next generation of players, and soon after, India produced waves of cricket players who would bring home cricket World Cups for India.

“At the time, Indians were underdogs in, terms of cricket, and ended up winning the tournament against the feared West Indian team,” Kataria said. “Since then, India started producing fantastic players, including the legendary Sachin Tendulakar. Seeing the performance of the Indian team motivated people to pursue cricket. More Indians started focusing on cricket.”

Senior Jonathan Mi said badminton, the sport he has invested countless hours in, is connected to Chinese culture and its emphasis on the sport.

Badminton was taken up by the Chinese because of the simplicity of the sport, according to Mi.

“I think it definitely relates to the culture since it’s not about your talent,” Mi said. “Anyone can play it. Thus, you see a lot of kids training really hard when they are very young, even though they may not be that gifted, which kind of relates to how Chinese culture is about hard work.”

From China is one of the most recognizable badminton players, two-time Olympic champion and five-time world champion Lin Dan.

Unlike countries such as Brazil and India, China’s driving motivation for the emphasis on badminton does not have to do with the fame and recognition, but with  government benefits.

“I think that as a sport, it’s definitely heavily sponsored by the government,” Mi said. “So, if you play it really well, you get free coaches and everything is covered. It’s heavily emphasized because given the build of most Chinese people, badminton is a very suitable sport. If you’re on the slender side,  it’s probably the best sport for someone to play in China.”

However, the emphasis that China puts on badminton is unique to the country. Mi recalls intensely following badminton when he lived in China, but now in the U.S. he said he rarely finds himself following or playing the sport.

Junior Lexi Gwyn also found herself in a similar situation — she used to follow a sport in Australia, but she lost touch with it when moving to the U.S.

“I definitely used to follow the Australian Football League quite a lot,” Gwyn said. “I don’t anymore just because there aren’t people around me that also enjoy it. I can’t go to games with my friends and cheer. In Sydney, like American football, we all for the most part, had the same team to root for, but in America you lose that.”

Originally, Australian football was started as a sport by Tom Wills in 1857 to keep cricketers fit during the offseason. It was first played with a rugby ball on a cricket field. However, the sport became unique to Australia.

“AFL has such an emphasis in Australia because it’s one of their national sports (or widely popular sports)” Gwyn said. “Why do you think America puts such an emphasis on the NFL? Same deal. It brings in good money from fans and helps the economy and it brings the community together where people might usually be separated by wealth or long commutes, they can come together to cheer for the same team.”

In many instances, according to Gwyn, winning fuels a culture around the sport. It gives people a reason to want to watch the game, play the game, and creates that emphasis on the sport in the country.

“Winning is my jam,” Gwyn said. “Winning also fuels sub- communities within a population and I think it’s the competition that fuels the culture.”