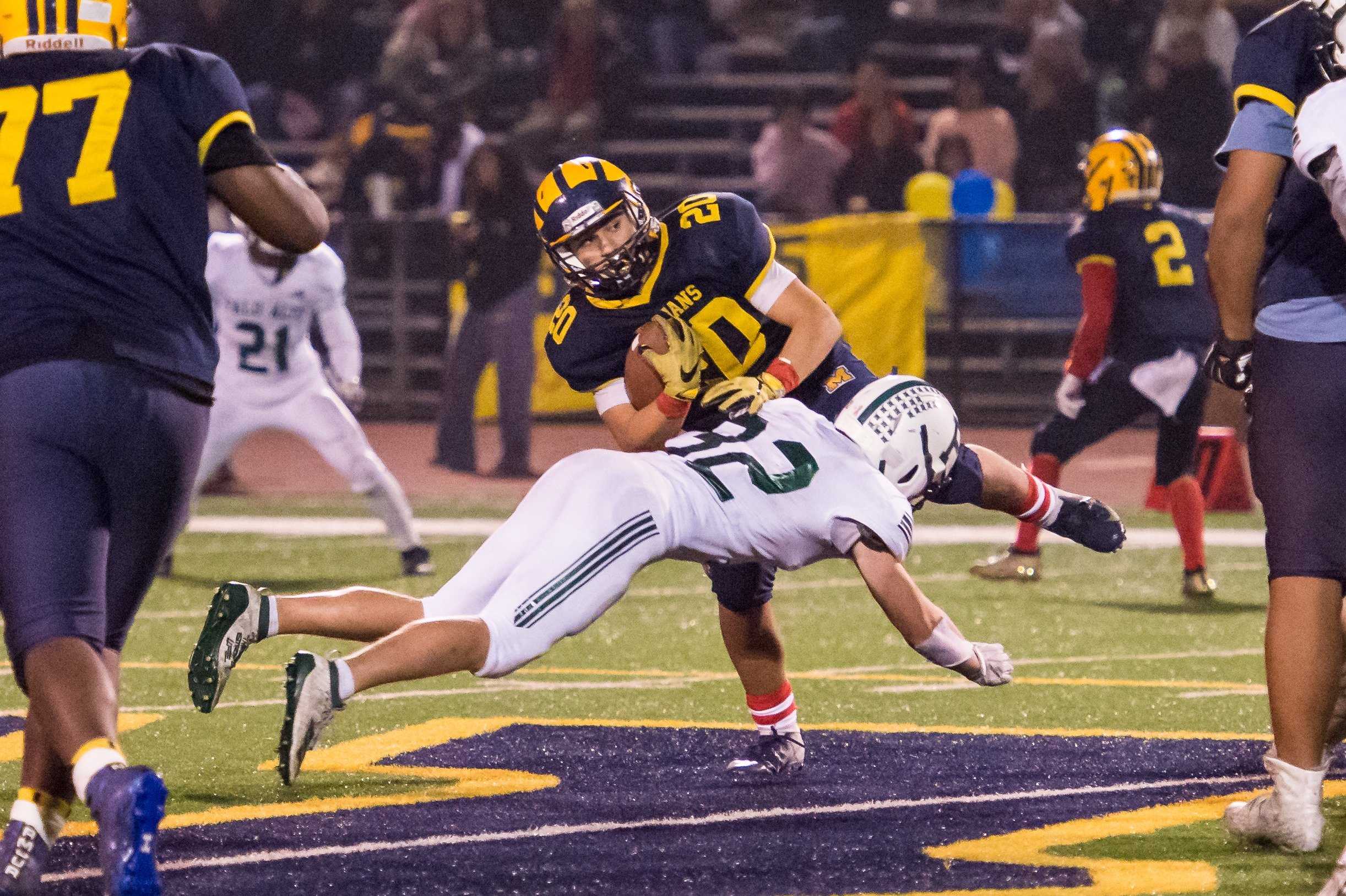 Between its better understood neurodegenerative side effects, national anthem protests and political overtones, football has seen its fair share of recent controversies.

But for senior Creighton Morgenfeld, football represents something more than the ups and downs of the sport. Having played since the second grade and completed four seasons with the Vikings, he said he looks at football as an avenue full of life lessons, virtues and friendship.

“It’s a lot of hard work throughout the week,” Morgenfeld said. “It’s not always so fun. But Friday nights in high school is the time to shine.”

“It’s the idea of delayed gratification,” Morgenfeld said. “It’s harder to come by today. People want things now and are less inclined to wait or work hard to get what they want. Football teaches you a lot about the value of hard work and dedication over a longer period of time, and how the work you put in throughout the season will pay off.”

That hard work took off when Morgenfeld was a middle schooler, playing corner for the Palo Alto Knights, a youth football team that went undefeated in Northern California in the 2015 season. The Knights went on to compete in Orlando, Fla. for the national championship.

“We won one game, but we got there,” Morgenfeld said. “I didn’t play very much because I was small, but I learned a lot and had a lot of fun. I really liked football as a game.”

In elementary school, Morgenfeld also played soccer, baseball and lacrosse, settling with the latter and football during middle and high school. Morgenfeld said this commitment has led him to forge strong friendships and has instilled in him leadership principles that guide his potential interest in entering the military after high school.

“I also really like how the (football) team is really close,” Morgenfeld said. “Everybody counts on each other to do their jobs. Everyone does their job, the team succeeds. If one person doesn’t, the team will fail. You can’t rely on just a few star players, you have to rely on everyone.”

Having started out as a physically smaller player, Morgenfeld said his willingness to work hard set him apart and positioned him to succeed.

“You might not start out as the best, but through hard work and dedication, you can make your mark,” Morgenfeld said. “I’ve gotten a lot better these past four years. I’ve moved around positions and have gotten better as a player, and I think a lot of that has to do with the coaches that I’ve had. They’ve all pushed me to succeed and imparted their knowledge to us, and pushed us on and off the field to be the best (we) can be.”

In particular, Morgenfeld credits his football and lacrosse coaches with the lessons he has learned about leadership. He was lacrosse captain his freshman and sophomore years.

“I learned from my coaches the best methods of leadership to motivate me and my peers,” Morgenfeld said. “Leading by example, you have to show who you’re leading that you’d be willing and able to do what you’re asking them to do. You have to show them that you care, that you’re really invested in them, their athletic career, their lives as a whole. If your team, those you’re leading, know you really care about them, they’re more likely to care about you and give it their all.”

Paly lacrosse coach DJ Shelton, who has known Morgenfeld since Morgenfeld was in middle school through summer lacrosse camps, has individually coached Morgenfeld to be a top face-off specialist — a position requiring extensive coaching and practice — in the league.

“As a leader, Creighton has grown from a tacit man of action, demonstrating personal growth and dedication, to actually requiring it of his teammates,” Shelton said. “He’s quite vocal on the field and in the weight room, encouraging his teammates to perform their best. He is, however, always able to maintain a friendly level of inspiration, encouraging rather than demanding. His positive demeanor and dedicated work ethic clearly evokes higher performances from his teammates.”

As Morgenfeld’s freshman World History teacher, Shelton described Morgenfeld’s motivation as a student and athlete as a factor in his lacrosse success.

“I learned why Creighton is so successful in all that he does — he is one of the most driven individuals I have ever met,” Shelton said. “When he makes mistakes, he is quick to inquire and then fix it. He is not only one of the top student-athletes at this school, but in the entire CCS (Central Coast Section) lacrosse community.”

“My experience with Creighton is as someone driven by an internal and unyielding standard of performance,” Gifford said. “He is highly competitive and does the necessary work to succeed and win. However, it is his deferential and humble nature that has impressed and been noted by all of our coaches. I see Creighton as someone who does well because that is what makes them happy — not to please someone else or hold it over others.”

Beyond serving as a leader on the field, Morgenfeld — who said he is interested in an economics or math major — may try to attend the U.S. Military Academy at West Point, from which he received a likely admit letter. He said his interest in military service was sparked by his father and grandfathers who served in the military.

“I’ve always viewed it as something that I’ve wanted to do,” Morgenfeld said. “Wanting to be in a career field where people are motivated, goal-driven and a tight atmosphere in the military, like on the football and lacrosse teams, the same closeness, the same motivation, people who are willing to sacrifice for each other. I think that kind of environment in the military is really appealing to me.”

Although Morgenfeld has not yet decided which military branch he would like to join, he said that he likes the fulfilling aspect of the service and the opportunities to furthermore improve oneself.

“You get a lot out of it,” Morgenfeld said. “You have a lot of leadership responsibilities that can really help you grow. The environment as a whole helps you build your character and become a better person. The caliber of the people you’re surrounded by are just higher than the average person, so it’s great people that you’re interacting with.”