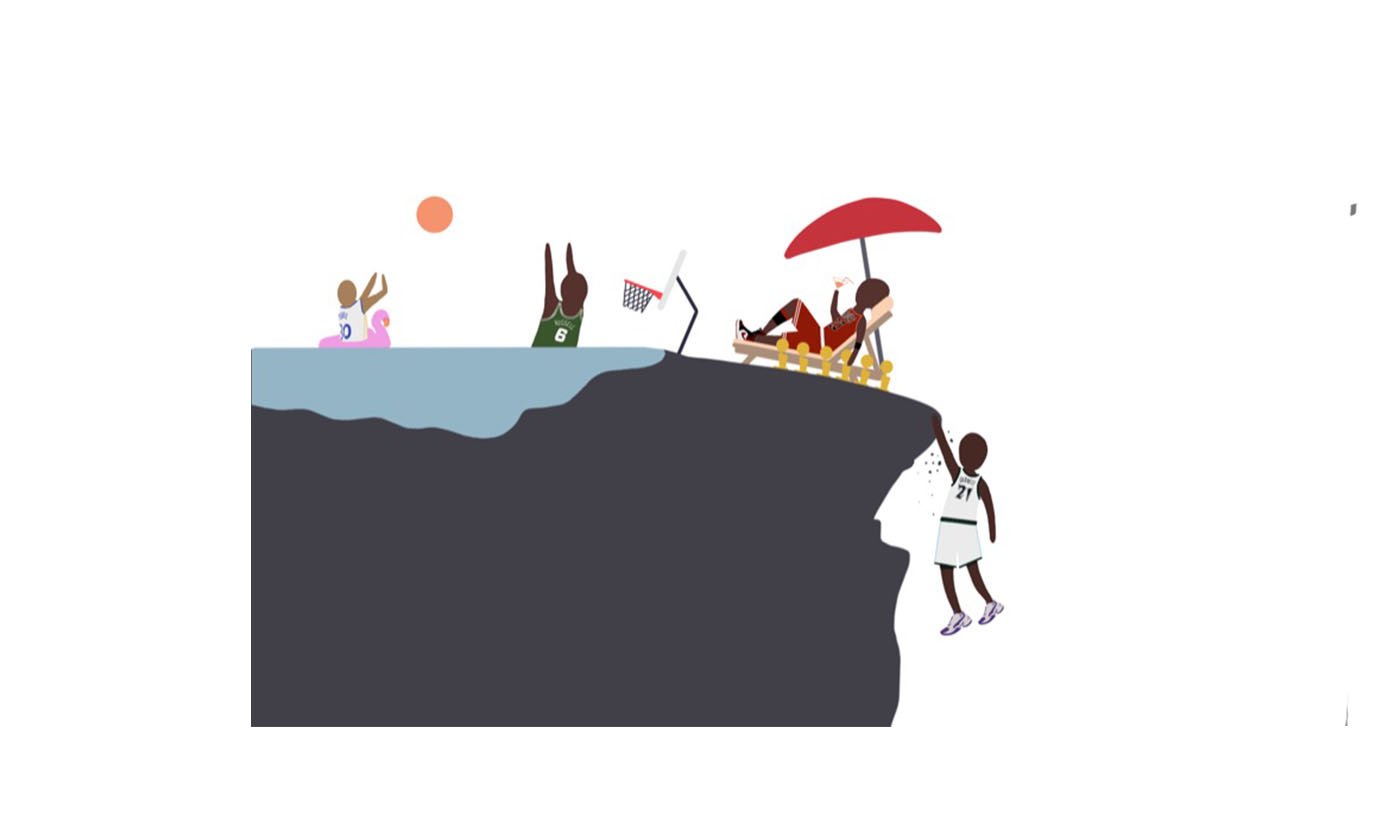 The truth about Parity in the NBA

When Kevin Durant announced he would join the Golden State Warriors on July 4, 2016, senior Ryan Seto was one of many basketball fans in an uproar. Some called it the weakest move of all time. Fans of the Oklahoma City Thunder burned his jersey, and fans worldwide agreed adding a top five player in the league to one of the greatest teams of all time was unfair.

“I think it was a pretty weak move,” Seto said. “It certainly ruined a lot of the excitement that the NBA brought, and it brought a new generation of superteams, which I don’t like.”

Former Mercury News sports columnist Mark Purdy said the move wasn’t a shock, but like Seto, he said it was a sign of the changing NBA landscape.

“I wasn’t surprised when Durant made that move, but I was certainly intrigued,” Purdy said. “More and more, the NBA is being manipulated by the superstar players, and I was mostly interested to know the dynamics of how it happened this time. As we now know, several of the Warriors players basically talked Durant into coming to Golden State after his initial interest.”

While Durant’s switch was lambasted by the media and fans as the end of fairness in the NBA, the truth is competitive parity in the league has always been a myth, Seto said.

For decades, the big market teams dominated the NBA while small market teams are at a competitive disadvantage because of their location.

“Small market teams pretty much just get dominated by the larger market teams,” Seto said. “Some teams have short-term success, but in the long run, they get destroyed.”

Purdy said for a long time the NBA has not been as competitive as other sports leagues.

“To me, the NBA has always been the least competitive league in terms of the number of teams that have a real chance of winning a title,” Purdy said. “It’s usually no more than three or four teams in a given year. Sometimes just one or two. And with the increased ability of the players themselves to create superstar rosters, I think that trend will continue indefinitely.”

Purdy also said the advent of superteams is beneficial for the league but hurts small market franchises.

“It probably helps the league on a national basis because viewers across the country like seeing top tier stars playing together,” Purdy said. “But I think it hurts the individual teams on a local (and) regional basis because the fans of those teams know that only three or four teams have a shot at a title and the great talent migrates to those teams.”

“(Who)’s the latest big player that’s gone to Milwaukee or something?” Snyder said. “Or Minnesota? Or Utah? When was the last time a big star went to Utah?”

Seto said a small market team has to do a few things to succeed.

“In order to remain consistently competitive, they have to be very good at drafting,” Seto said. “And they also have to have a good basketball culture and good management and good coaching, meaning players want to stay there.”

Snyder, who is an Indiana Pacers fan, watched his team draft well and build a winning culture in the mid 2010s, but Indiana’s homegrown superstar Paul George still requested a trade to Los Angeles.

“Historically, people want to go to the Lakers,” Snyder said. “Look at Shaq. He’s made a lot of money post-career. It’s more predictable that you’ll be successful in LA. Whereas like, Sidney Moncrief, what did he do after playing? Nothing.”

“Even then, the NBA competition was limited,” Purdy said. “The Royals never could win the title, in spite of having great players like Oscar Robertson and Jerry Lucas, because the Boston Celtics had and hoarded even better talent and seemed to win the NBA title almost every year.”

“Luke Walton was the coach of the Lakers, and that was the year LeBron came,” Snyder said. “Players don’t really care about staff and culture as much because there’s enough factors off the court whereas smaller market teams need to be the best just to have a chance.”

Seto said the Spurs have managed to succeed because of their culture and front office despite not being able to sign a marquee player in free agency.

“The Spurs have continued to dominate because they have good ownership and good coaching, and they draft really well,” Seto said. “Bigger market teams don’t need any of those things. They don’t have to draft well or have a great front office. They can always rely on getting a free agent and building a team around them.”

But Purdy said the biggest factor in determining a team’s success is compatibility of talent, not the talent itself.

“The willingness of great talent to be unselfish and play with — and for — each other (is most important for team success),” Purdy said. “I remember attending a Warriors practice several years ago, in (2015) and started up a conversation with Al Attles, the great Warrior Hall of Famer who coached the team’s 1975 title team. Attles said the thing that he almost couldn’t believe about the Warriors of Curry-Thompson-Green was that they all did agree they were playing for each other. To find complementary personalities and attitudes on a team was a big thing. They’d share the ball, move the ball around in the motion offense, play good help defense and didn’t care as much about their individual stats. That was so unusual in the NBA of today, Attles said”

Since the 1979 – 1980 season, when the introduction of the three point line ushered in the modern NBA, 31 out of 40 championships have been won by a big market team, with only the Spurs, Detroit Pistons and Cleveland Cavaliers managing to win a ring otherwise.

Still, Seto said there are some examples of unsuccessful teams playing in big markets.

“The (New York) Knicks are still awful,” Seto said. “Despite being the largest market team, their culture and their front office are horrible, and their owner is probably the worst in the league.”

Even so, many small market teams fail to succeed even when they draft well and build a winning culture, because smaller markets don’t make as much money as their large market counterparts.

“The downfall of the Thunder came because they didn’t want to pay the luxury tax,” Seto said. “So they traded away a future MVP and rising star in James Harden. And if they had just waited a few years, or if they just decided to shell out the money at the time, there’s no doubt they would have won multiple championships.”

Seto also said even small market teams that draft a superstar struggle to be competitive.

“Take the (Minnesota) Timberwolves, for example. They had a really good star in Kevin Garnett, but ultimately, he moved on to the (Boston) Celtics, which is a larger marquee team,” Seto said. “They just don’t have either the cap space or the or the benefits that the larger market teams have, like more endorsements and media coverage.”

One tool the NBA introduced to help small market teams retain their drafted talent is the supermax contract. A player who has recently been named to an All-NBA team, won Most Valuable Player or won Defensive Player of the Year is eligible for a contract that takes up 35% of the salary cap with an 8% raise each year. The supermax can only be offered by the team that drafted a player or traded for him while he was on his rookie contract.

But Snyder thinks the supermax also has some negatives.

“If a team is smart, the supermax can really help them,” Snyder said. “But from the standpoint of the Washington Wizards where they put an injury-prone John Wall on a supermax, and he hasn’t played a full season since then, the supermax is not a good thing. So I think it’s all just in the eye of the beholder.”

“It’ll help in some cases,” Seto said. “But it makes it a lot more difficult for the small market teams because they’re gonna have to shell out massive amounts of money, like hundreds of millions of dollars to these players that could potentially get injured or fail.”

Seto said despite tools like the supermax, the advent of unrestricted free agency in 1976 changed the NBA forever, and small market teams will have a tough time breaking through and winning a championship.

“I would consider the NBA to be sort of like an oligopoly,” Seto said. “Where the larger markets like the Lakers, the Celtics or the Warriors are able to dominate the smaller market teams.”