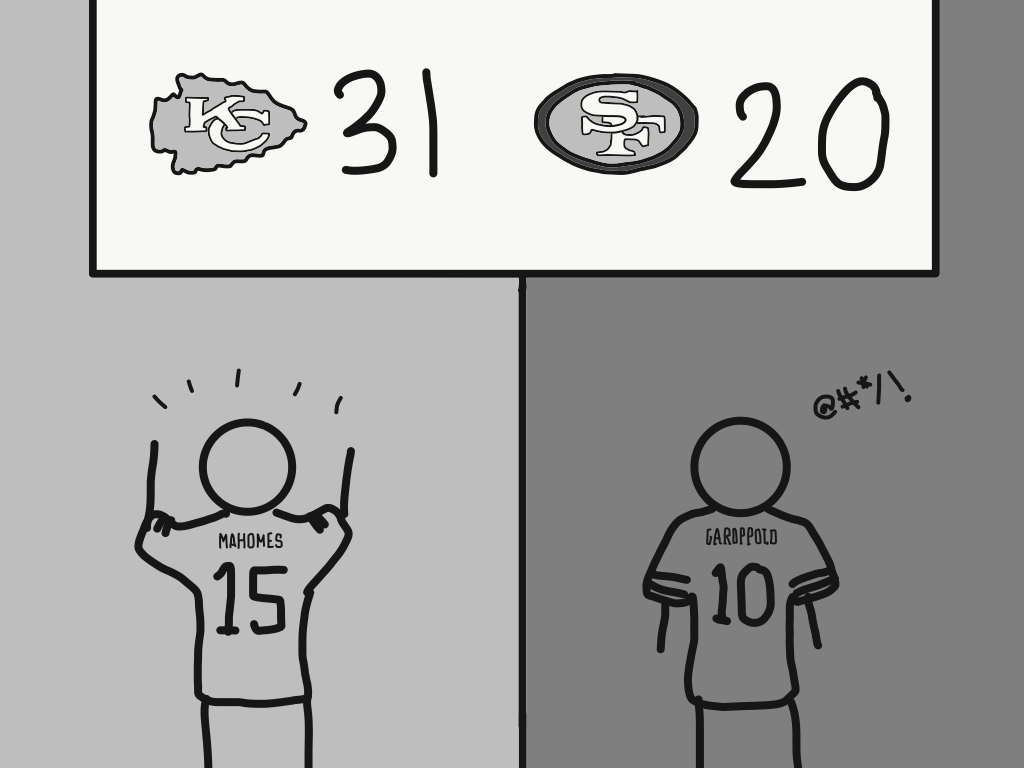 As the clocked ticked to the last second, freshman Ishann Batra’s face fell into his hands. While he sat on the couch with his friends after the Super Bowl, Batra realized all the San Francisco 49ers’ hard work and dedication had led to this game, only for them to lose.

“It was a tough game,” Batra said. “I really thought this was our chance to win another Super Bowl.”

Despite being considered both underdogs and overrated by many, the 49ers surprised a lot of people by winning their first eight games in the regular season. They ended up with a 13-3 record and picked up the number one seed in the National Football Conference west. And after two hard-fought playoff games, they earned a spot in Super Bowl 53.

But as the game clock expired, faithful fans like Batra felt tears swell up as the 49ers lost 31-20 to the Kansas City Chiefs.

“It hurt a lot,” Batra said. “After not making playoffs for many seasons. This team put in a lot of effort and consistent performances this season,  (but) it was still not enough to win.”

But regardless of the loss in the Super Bowl, many fans recognize the achievements and progress the 49ers made this season.

Sophomore Thayer Kacher has been a passionate 49er fan since he was born, and said he recognizes the 2019-20 season as one to remember.

“Honestly I was super surprised,” Kacher said. “I thought we would be a 10 win team. But we did better. It was exciting to see how far we went although we came up short.”

Batra, too, has been a 49ers fan from a young age.

“Growing up here, I feel immense pride in supporting the niners,” Batra said. “People who stopped supporting or following the 49ers when they weren’t so good are not true fans. No matter how bad they get, I’ll always take pride in them.”

English teacher Lizzie DeKraai, has supported the Kansas City Chiefs for her whole life. She describes the tension from supporting another team while living in the Bay Area.

“I was all decked out in Chiefs gear,” DeKraai said, “I was at Piazzas and a couple of people gave me glares, hard glares. But there was support from raiders fans but definitely a lot of hatred from 49er fans, a lot of shade, from my students especially.”

Not only was DeKraai supporting the opposition, but she also experienced the harsh realities of supporting a different team from where you are.

Regardless of who you support, teams go through rough and good times. But even a tough loss in the Super Bowl, many 49er fans say they aren’t dwelling on their teams’ Super Bowl loss. They are already looking onto the next season.

Many have already set their sights on  next year’s Super Bowl.

“I think we’ll do even better next season,” Kacher said. “This season gives the players and the fans a lot more confidence. I think going into next year we got a good amount of free agents, so we need to resign. But if we do resign them I think we’ll be just as good, maybe even better.”

However, DeKraai has opposing views.

According to Batra, more people in the Bay Area should take pride in the 49ers, especially because they reside so close to Palo Alto.

Batra said, “We should recognize and feel the pride in having a team so close to us going to the Super Bowl.”